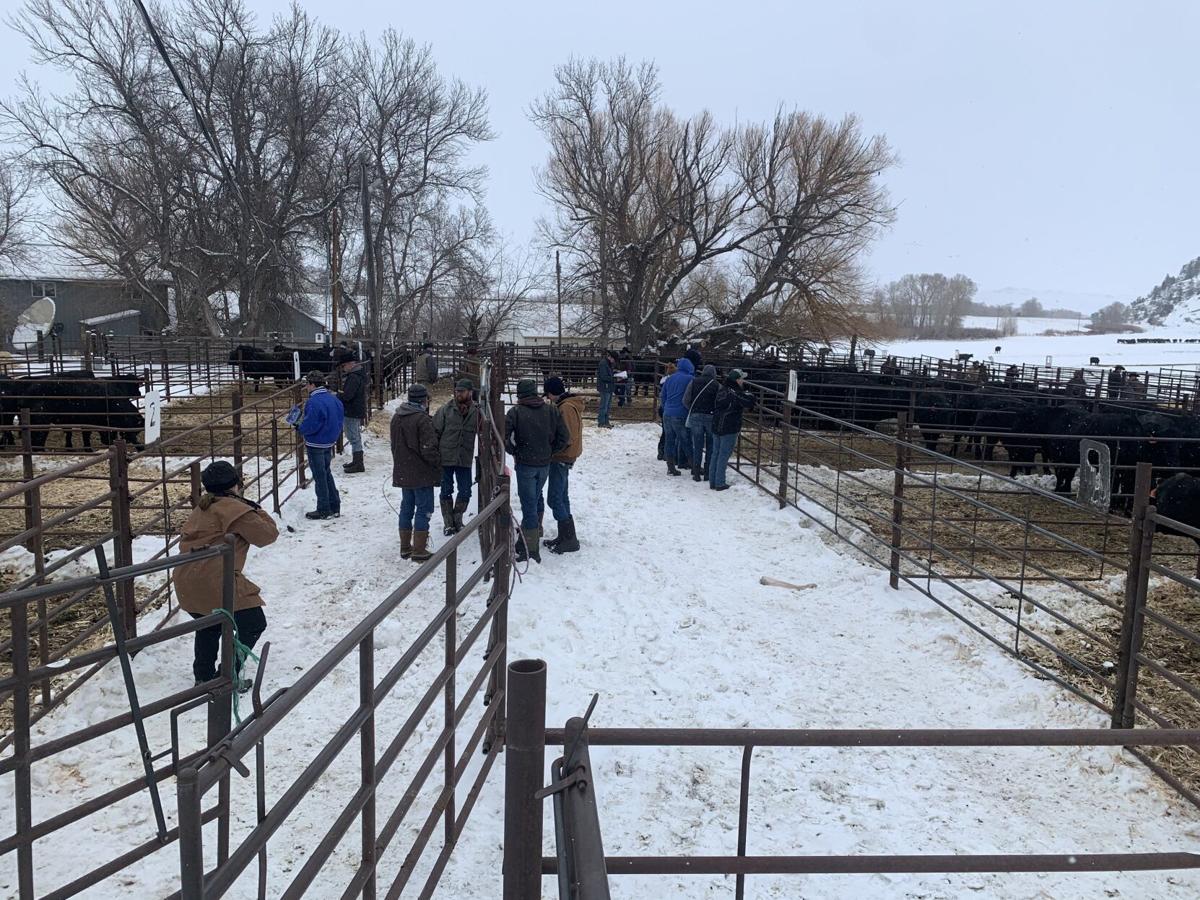 Buyers checking out the bulls prior to the sale. 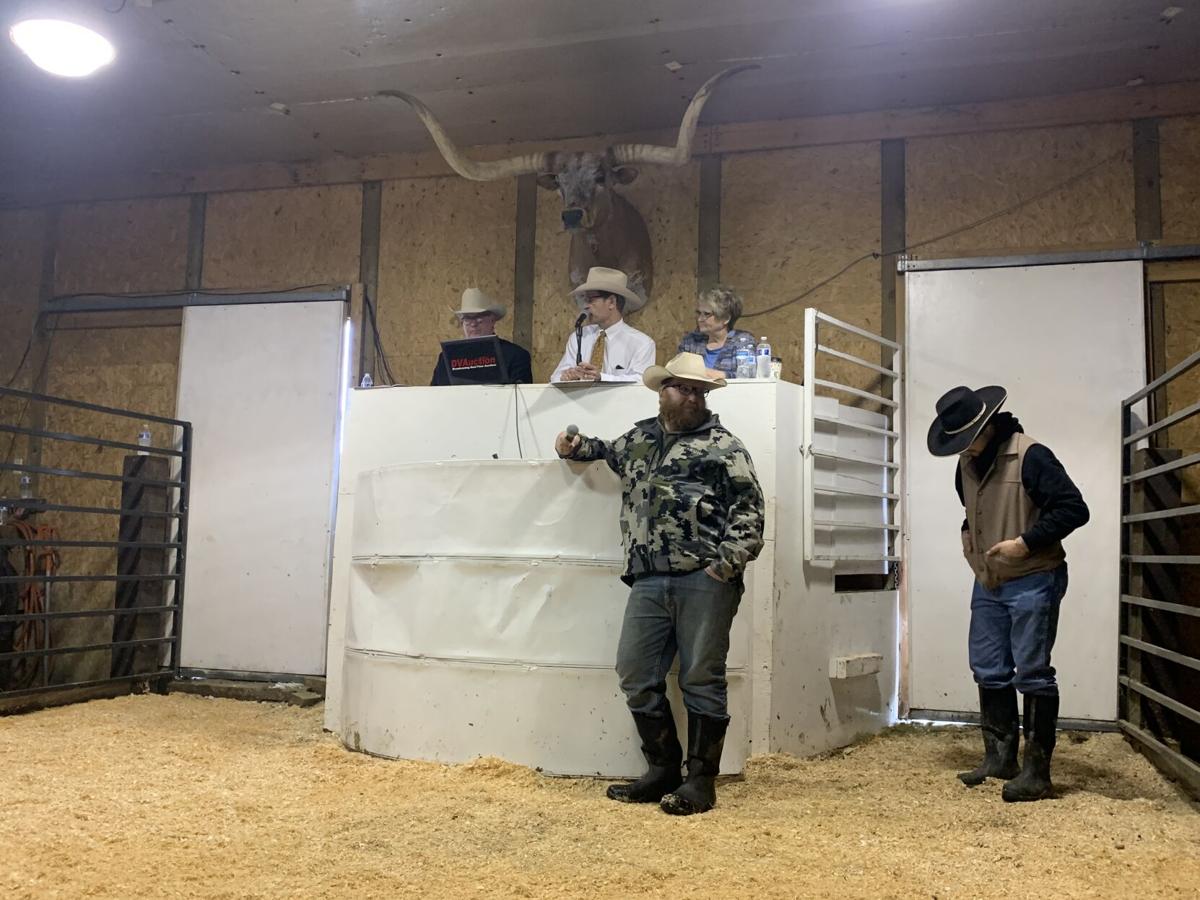 SPRINGDALE, Mont. – Like most Montana agriculturalists, Jim Felton was enjoying the mild winter the state had been experiencing. However, the other shoe had to drop at some point, and when it did, it was “Katie, bar the door.” A Polar Vortex swept its way across Montana the second week in February, bringing with it extreme cold and dangerous traveling conditions.

In addition to an unexpected Polar Vortex, the Felton Angus Ranch’s 48thannual bull sale was also scheduled to happen on Feb. 8. The terrible weather conditions forced the Felton family to consider moving their sale, a decision they did not take lightly.

Ultimately, Jim Felton and his family felt the safety of their customers and bulls were of the highest priority, so for the first time in 48 years, the Felton Bull Sale was rescheduled for Feb. 16.

“It’s never really a good choice to have to make, but Monday (Feb. 8) was just completely nasty here. Between Super Bowl Sunday and Monday, I think there were three 12-15 car pile ups between Billings and Springdale,” Jim reflected during a phone update on Feb. 11.

With the sale pushed back a week, Jim and his crew had a bit more time to ready the sale barn, clean the shop and weld on pens if they needed it. Other than that, it was a cold week of feeding cows and taking extra care of the sale bulls.

“We’ve been having to bed the bulls down every night because it is so stinking cold. This is the first time all year I have had to use any bedding,” Jim said.

Bedded-down bulls have a tendency to get dirtier, which isn’t ideal, but what is more important is the fact the straw kept them warm during one of the longest, coldest streaks in Montana’s history.

The cold streak finally broke on Sunday, Feb. 14, and by Tuesday, Feb. 16, temps in Springdale climbed to the upper 20s, which felt almost balmy. It was a much better day to have a bull sale. The rescheduled date didn’t seem to bother Felton customers because by 1 p.m., the sale barn was standing room only.

Jim opened the sale by welcoming and thanking everyone for attending. The Felton’s bull sale is truly a family event with Jim’s mother acting as sale secretary while Jim and his dad took bids. Auctioneer Roger Jacobs took command of the mic after Jim’s opening to officially start the bidding.

“We call them the Felton kind,” Jacobs boomed as the sale bull for Lot 1 sauntered into the ring.

In a little under three hours, some 200 head of bulls and 50 bred heifers had run through the ring. The bulls showed true to the Felton’s goal of breeding, long, capacious bulls with the feet and bone structure needed for them to stand up and cover country.

“We had a heck of a sale in Springdale, America,” Jim beamed.

With the sale complete, Jim will now have to fire up the Duramax and get to work hauling. Bulls were sold into 16 different states stretching from New York to California.

SPRINGDALE, Mont. – In addition to offering Black Angus genetics that are appreciated by the beef industry, Felton Angus Ranch also prides the…

Johnsons pray for rain, Jeff heads to Helena to testify

DELL, Mont. – Spring is certainly in the air in southwest Montana as the temperatures rise and the snow melts. Although Jeff Johnson and his s…

SPRINGDALE, Mont. – It is springtime in the Rocky Mountain region and for the Felton Angus Ranch, which lies at the base of the majestic Crazy…

FORSYTH, Mont. – A year of work developing seedstock Angus bulls for commercial cattlemen came to fruition for the Larsens at their 47th annua…

Buyers checking out the bulls prior to the sale.