Cali and Tyler Rooney stand out in their waste-high field of cover crops. Their cows may think they have died and gone to heaven when they hit that quality of forage. 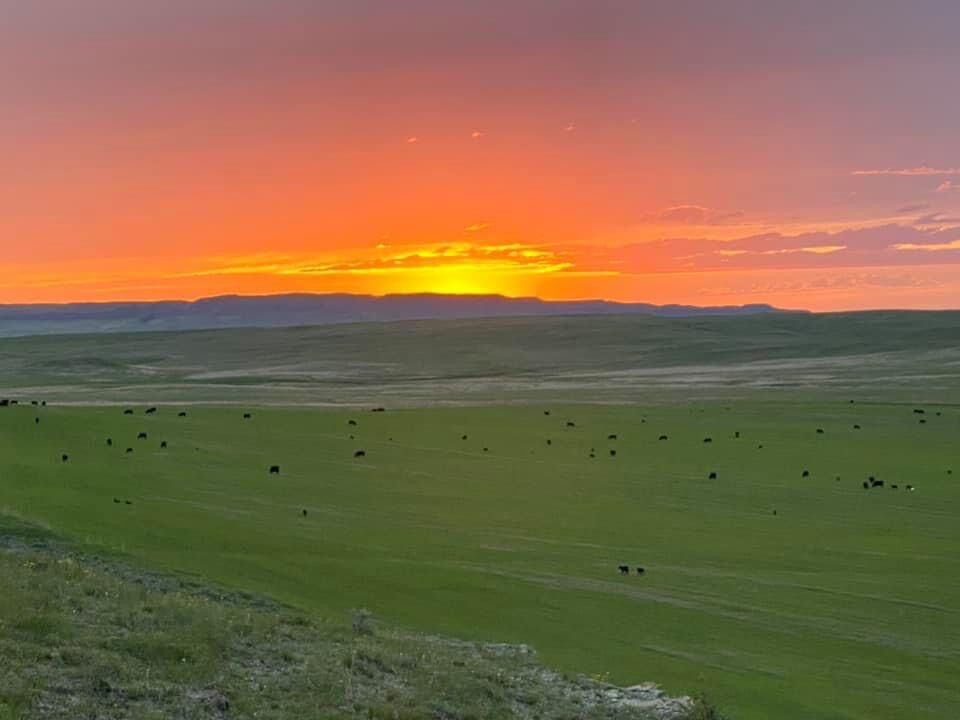 A beautiful Charlie Russell sunset blankets the grassy hills of the 406 Rooney Ranch.

Cali and Tyler Rooney stand out in their waste-high field of cover crops. Their cows may think they have died and gone to heaven when they hit that quality of forage.

A beautiful Charlie Russell sunset blankets the grassy hills of the 406 Rooney Ranch.

RAPELJE, Mont. – Looking out across the rolling grasslands between the small Montana towns of Rapelje and Big Timber, it is easy to see why it is cow county. For as far as the eye can see, contented cattle graze, but that is not the only reason the county is good for livestock. Although the majority of farming in the area is done on a dryland basis, the fertile topsoil of the region is great for producing certain crops, specifically hay.

Cali and Tyler Rooney spent most of July harvesting their dryland hay crop. The baled forage will be fed to their cattle during the sometime long winter months. Cali reported during a phone interview, on July 20, that haying on the 406 Rooney Ranch was officially complete.

“We got about 2,000 bales. It was good tonnage. We have gotten more in the past, but this will definitely be enough to get us through the winter,” Cali added.

Cali went on to say that, overall, haying season was rather uneventful this year, with no major breakdowns or mishaps to speak of. The Rooneys were even able to largely avoid any moisture, so the majority of their hay crop got put up without being rained on one drop.

With the actual harvesting of the hay finally in the rear-view mirror, attention must now shift to getting it all stacked. After that, the couple will be able to focus more on their cow herd, and of course, there will always be fence to fix.

The Rooney’s cow herd has been blissfully munching on a cover crop mix of peas, oats, turnips, kale and collards while the couple was busy haying. The last week in July the herd was moved onto a cover crop consisting of the same mix, but in this field the forage stood higher than Cali’s waste. It could be thought of as cow heaven, for sure.

Cali and Tyler began planting and using cover crops when they returned to the family operation in an effort to practice regenerative agriculture. The cover crops serve two major purposes: yes, feeding the cattle, but they also help with soil health.

“We probably graze about 70 percent of a cover crop field, so we leave quite a bit of residue to help with soil health,” she explained.

A properly managed field of cover crops, the Rooney’s have discovered, pack a lot of feed that can be utilized by cattle. The Rooney’s have had about 180 steer calf pairs on 160 acres of the aforementioned cover crop mix. The pairs have been grazing the mix for about a month and Cali estimates 30 percent of the forage is still left in the field.

Before too long, Cali will have to shift gears entirely and begin preparing for school, which will begin the end of August. Cali teaches agriculture education and music in Rapelje. Last year she taught part-time, but this year she will be teaching ag education full-time. Her genuine love and passion for agriculture shine through in her ability to teach.

These remaining weeks of summer will have Cali busy with general ranch duties while also preparing lesson plans. The keen businesswomen is also keeping a close eye on the cattle markets, because before they know it, it will be fall and the Rooneys will be busy weaning calves.