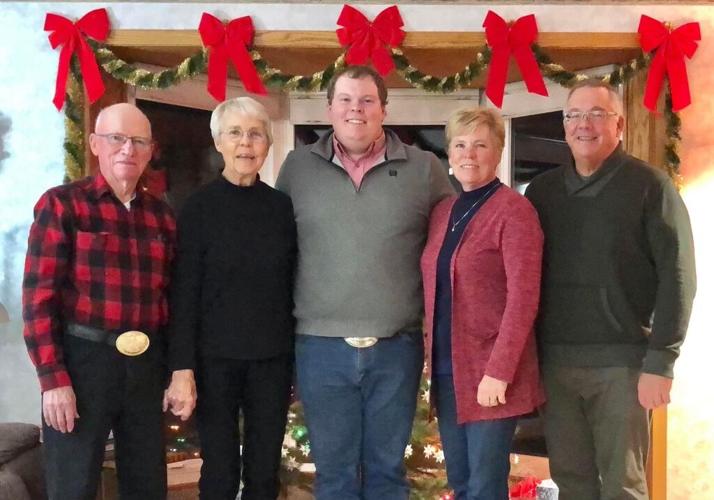 Tanner Jorgensen comes from a long line of farmers on both sides of his family. From left to right: Tanner's grandparents, Wayne and Arletta Herman; Tanner; and his parents, Jandy and Tom Jorgensen. 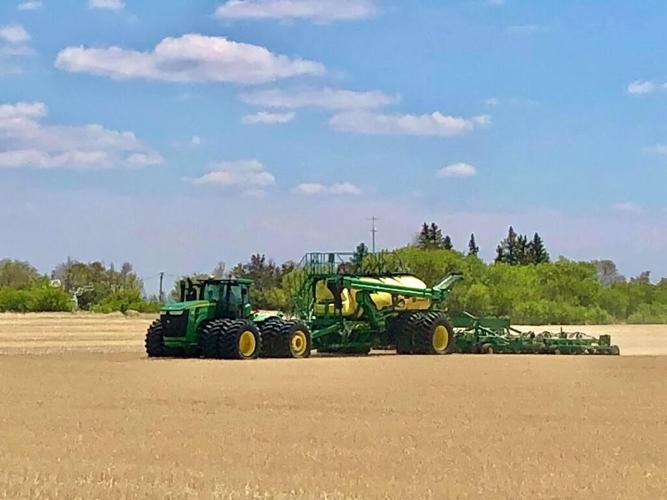 Tanner is most looking forward to getting in the field and doing some seeding.

DAGMAR, Mont. – Tanner Jorgensen, a fourth-generation grain farmer, will tell you that northeast Montana is unique – feast or famine landscape that can both provide a person everything they need for a successful crop or take it all away at will. Covered in rolling hills and gentle coulees, Sheridan County’s agriculture is nearly equally split between ranching and farming. It all depends on what the first generation decided to stake their claim at.

Tanner’s Nordic great-grandfather emigrated from Denmark to Dagmar sometime in the 1920s to try his hand at farming. The dust bowl of the 1930s got the better of his operation like it did so many others in the region, so he had to make a career change.

“My great-grandpa started working for the county and was the county road foreman until he retired. In the 1940s, my grandfather and him bought the place we are now on, which is about eight miles north of Dagmar,” Tanner explained.

Tanner’s father, Tom, and his mother, Jandy, moved back to the family operation in 1996, the year Tanner was born. Tanner’s childhood was that of an idyllic farmer’s son, so it is no wonder he grew up heavily involved in FFA, the organization he says that officially gave him his independent start in the farming business.

“I’ve actually had my farm since 2011. I started it as an SAE project in FFA. I was running some ground for my mother’s father and it was a pretty good deal for me. I was able to pay for all my college with it,” he said.

After graduating from Montana State University in 2018 with a degree in Ag Business with a concentration in farm and ranch management, Tanner returned to the family operation. Farming alongside his mom and dad is just the way the world is supposed to be for Tanner.

The Jorgensens raise predominately durum in addition to green peas. This year they are throwing in some canola, as well.

“Canola is at a good price right now and we’ve got some ground we want to try it on, so we pulled the trigger and are going to put in some canola just for the heck of it,” Tanner said with a chuckle.

It has been a very interesting production year in northeast Montana. A historic, lingering drought made for a dry and somewhat depressing winter, but spring has turned into a weather whirlwind with record snowfall occurring just after Easter. Tanner refuses to complain about the moisture, but he does point out that the timing is a tad inconvenient.

“We haven’t been too fired up to hook any drills up or anything, but I have a feeling we will be getting to that this week,” Tanner said during a phone interview on April 24.

With good moisture in the ground and a forecast of nice weather, the Jorgensen family is gearing up to get into the field. Right now the focus has been on equipment maintenance to ensure all the machinery is ready to go, but the next step will be hooking equipment up.

“By the looks of it, tomorrow (April 25) is supposed to be pretty nice and the wind isn’t supposed to be howling a hundred miles an hour like it has been, so I think we will at least get one drill hooked up and get it ready to go and possibly the second drill. Later on in the week, we might get our seed treater rigged up and start treating some peas,” he said.

Tanner admits, he is getting pretty excited about the upcoming field work.

“There is just something about the spring air and the start of another year that just gets a guy fired up,” he said with excitement.

It’s a new year and a new crop, but the dream and goal are the same for Tanner – raise the world’s healthiest and most quality crops all while stewarding his family’s land, just like the generations before him have done.

The Prairie Star thanks the Jorgensen family for allow us to follow along with their operation during the growing season. We wish them the best of success!

DAGMAR, Mont. – It is no secret that farming is a profession not for the weak of heart. The generations before that plowed and tamed the prair…

HUNTLEY, Mont. – After a 20-year career in the United States Army, Greg Gabel has more than learned how to go with the flow. A work-related cr…

HUNTLEY, Mont. – Authorized in 1905, the Huntley Project was the fifth federal project to convert arid prairie into farmland. Since the comple…

Tanner Jorgensen comes from a long line of farmers on both sides of his family. From left to right: Tanner's grandparents, Wayne and Arletta Herman; Tanner; and his parents, Jandy and Tom Jorgensen.

Tanner is most looking forward to getting in the field and doing some seeding.