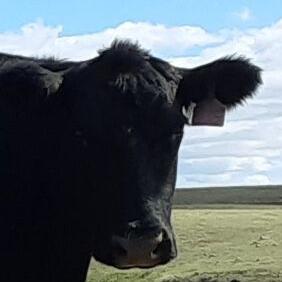 A cow on the Lewis ranch. 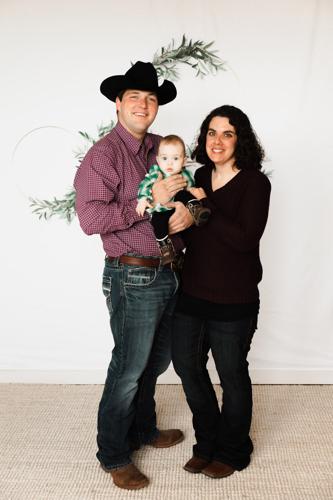 On the native prairie grasses in northern Toole County, young seedstock producers Kari and Kaleb Lewis run their registered Angus cow/calf pairs and offer some custom grazing, as well. They are holding their 2-year-old daughter, Kaci, and there is a baby boy coming in September. 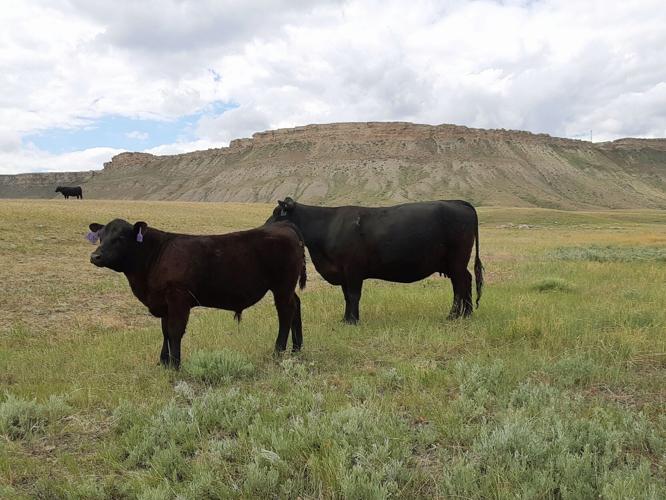 On native prairie grasses in northern Toole County, Kari and Kaleb Lewis run their registered Angus cow/calf pairs and offer some custom grazing, as well. Kari spoke to producers about recordkeeping at Montana’s Next Generation Conference and talked about her operation to The Prairie Star.

Recordkeeping can be challenging for any operation, but Kari Lewis, a Montana rancher and Extension agent, believes it can be key to knowing where you stand financially.

Some ranchers are fortunate to have been passed down “Redbooks” from their grandfathers or fathers that have calving records and more information about the herd and the operation in them.

“What a blessing it would be to receive good records from that older generation, whether it’s a Redbook or sheets that have been printed out that give you great information,” Kari said.

Kari asked on Facebook what advice people had in terms of recordkeeping, and a woman, Maggie Nutter, shared a her story.

Maggie said when her husband’s mother passed away, he left her 15 years of Redbooks.

“Those record books are precious for many reasons, but they held a great amount of historical information about production,” Kari said.

She explained that the books tell when and how many cattle were moved from pasture to pasture; how many and what were sold and where; hay production per field; sketchy calving records; details like which waterlines have been fixed; big weather events; as well as shipping and branding dates for producers and their neighbors.

“If you don’t have that little book in your pocket now, start carrying one and keep it,” she said.

The couple has a 2-year-old daughter, Kaci, and a baby boy coming in September.

“My husband and I had been ranching with my parents, Wayne and Roxy Gillespie, and I have had cows since second grade, and have grown my herd over the years,” Kari said.

After college, grad school, and marriage, Kari and Kaleb returned to the family ranch in 2013.

In August 2020, the couple was excited to have the opportunity to purchase the ranch of Kari’s uncle and aunt, Butch and Doreen Gillespie, near Kevin, Mont.

“For about two years now, we have had our own operation separate from my parent’s ranch,” she said. “We’re growing our herd, but one of the main goals we have is minimal debt.”

In order to do that, Kari believes in careful recordkeeping and using software that helps them know where they are financially at all times.

With growing the new operation and herd, there are challenges that the couple faces every day. Time and labor are two of those, especially since both work off the farm.

Kari works as the county Extension agent, while Kaleb works as a technician on wind towers. When they are not working at their off-ranch jobs, they are working evenings and weekends on their operation.

“I like to think that hopefully we make a pretty good team and we’re learning to work together to make this work as best as possible,” she said.

“We haven’t taken out any loans to buy cows, so we grow our herd when we can. In the meantime, we have taken in cow/calf pairs for the summer to use the extra grass,” she said.

Along the way, Kari has learned some tips that help with bookkeeping through trial and error and has found ways to make keeping records easier for the user.

They have to be careful where they spend.

“We would like to have all that equipment that folks who’ve been ranching for 30 years have, but we are young producers, so we really have to keep that desire in check with the stage of our operation in terms of recordkeeping,” Kari said.

Kari uses Microsoft Excel for the production side of the operation and Quicken software on the financial side. She doesn’t endorse any certain brand, but she shares her experiences with what she has used and is familiar with so that it could possibly help other operators.

“One thing that I really like about Quicken is it allows us to download all of the transactions,” she said. “I just hit update and all of our bank transaction data automatically goes into Quicken. It has the dates, the amounts, and sometimes it lists where that money was spent.”

Afterward, Kari goes back in and categorizes the expenses.

“Then I can automatically run reports by week, by month, by year – in terms of our budget, our spending cash flow by year end, and all sorts of things like that,” she said.

Recordkeeping is important to the Lewis family.

It is “critical to communication within our business.” When expenses are listed by category on paper, they can see where they are spending and where they can trim their budget.

For example, last winter, Kaleb wanted to purchase a side-by-side, which was needed around the ranch in the extremely cold weather.

“By looking at expenses, Kaleb was able to come to the conclusion that if we reduced the Town Pump snack and beverage category and sold those used 4-wheelers that we don’t really need anymore, we can make that work,” she said. “While there’s a little bit of humor there, I do think it’s a really good starting point for having those conversations.”

The Lewis family has goals for both the ranch and within the family for one, three, five and 10 years ahead.

“We have to have good records to know if we are on track to meet those goals, and it also helps us track where we’ve lost money,” she said.

Keeping good records is also an important decision-making tool and is critical to personal and business communication.

It can also point the way to decisions about what a good business model for their operation would be.

“Being young producers, we’re still trying to decide, should we stick with the registered cows or should we switch to a yearling or a commercial cow/calf operation,” Kari said. “We really need to have some good books to know what this operation is truly costing us and how much our off-farm jobs are supporting it.”

The Lewis family hopes to master the finances and what that involves sooner rather than later.

“If we are sloppy with our financial recordkeeping when we have 65 cows, we would be sloppy if we had 365 cows,” she said.

Some ways Kari has been able to meet challenges include:

• Try to eliminate clutter in paperwork so deadlines aren’t missed.

• Reduce the amount of paper that comes into the house.

“The remaining goes into this little system that I have where it’s either a bill or deposit or a ‘to-do’ or it’s a coupon,” she said. “And I really want to keep that paperwork off the kitchen counter.”

Receipts have been a big challenge for Kari.

“Receipts are frustrating because if they are missing, then I don’t know how to classify that within Quicken and it becomes an uncategorized expense,” she said. “And that means it’s not tax deductible because we don't know what that was spent on.”

They have improved their process by:

• Setting up monthly billing accounts with businesses that they use frequently.

“It’s a whole lot easier to get that monthly statement from CarQuest that lists the various tools that were purchased there, versus getting a pile of crumpled up dirty receipts that came out of the pickup,” she said.

• Scanning receipts in on the Quicken app.

Paying bills can be a challenge for any operation, but Kari has a few pointers:

• Write bill due dates on the calendar one week early.

“It’s not a matter of just writing the check and paying the bill, but it’s also checking in at least monthly to see how we are doing in terms of sticking with the budget that we have set up,” she said.

Categorizing expenses while bookkeeping has been a challenge, but Kari has started merging or re-naming categories and creating sub-categories to simplify recordkeeping and minimize the number of overall categories.

“I really want to be honest with what things actually are so that we have a good idea of how we’re doing. And then I would also say the bookkeeping must work for us,” she said. “I would say the most important thing is to find a system that works for you.”

In a phone interview about their operation, Kari said they sell their registered bulls annually as most seedstock operations do.

In the past, they have worked with another registered Angus breeder to market their registered bulls through their bull sale.

“This year, we also consigned six registered bulls to the Treasure Bull Test sale in Great Falls,” Kari said. “We consigned the bulls because we wanted to see how our bulls would stack up against other breeder’s bulls. We ended up with the Reserve Champion Jackpot bull and the high weight-per-day of age bull, as well. We were pleased with that.”

Now, at the ranch in Toole County, Kari knows the area is in extreme drought on the U.S. Drought Monitor.

“All of Toole County is in D3 drought designation. We haven’t had any significant moisture all winter and spring – just a lot of cold and wind,” she said. “Fortunately, we do have extra grass because we are still in the process of growing our cowherd, but there are others who have had to sell some cows.”

But Kari, like all farmers and ranchers, is hopeful.

“June is a good month to get precipitation, so we are still praying it is coming,” she said. She remembers back in 2002, after a long drought, the area received 11.25 inches of rain June 8-10. “That is more than we get in the entire year.”

It has not stopped farmers and ranchers from planting their crop this year.

“There was a farm wife who said, ‘The seed doesn’t grow in the bin.’ You have to have faith,” she concluded.

Kari spoke at the 2022 virtual Montana’s Next Generation Conference about good recordkeeping on the ranch. Her presentation was a producer highlight within the Jan. 11 session on Beginning Financial and Production Recordkeeping. For more information, see https://mtnextgen.com.

Hemp farmer builds own house out of hemp fiber

BUTTE, Mont. – Kim Phillips, a Montana farmer who is nationally known for winning the right to irrigate her industrial hemp crop with federal …

A cow on the Lewis ranch.

On the native prairie grasses in northern Toole County, young seedstock producers Kari and Kaleb Lewis run their registered Angus cow/calf pairs and offer some custom grazing, as well. They are holding their 2-year-old daughter, Kaci, and there is a baby boy coming in September.

On native prairie grasses in northern Toole County, Kari and Kaleb Lewis run their registered Angus cow/calf pairs and offer some custom grazing, as well. Kari spoke to producers about recordkeeping at Montana’s Next Generation Conference and talked about her operation to The Prairie Star.