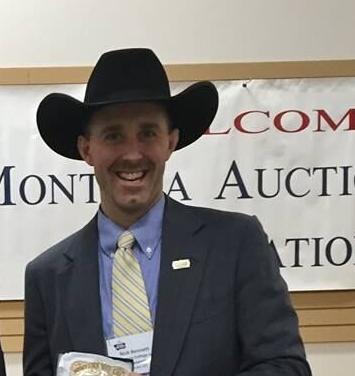 Nick Bennett at a past MAA convention.

These students are the most recent graduates of Western College of Auctioneering in October 2020. It is the first class to take part of the college course online, and part in-person.

“On a Dec. 20 conference call with board members, we decided not to hold the annual winter MAA Convention this year due to COVID-19 and the difficulties we would have with getting the members together,” Bennett said. “It’s unfortunate.”

The MAA may still hold its summer convention in 2021, but that is undecided right now.

“MAA members will miss getting together, but we understand why it can’t happen this year,” he said.

The MAA Convention is a get-together that is not just a fun event. There are contests that keep auctioneers involved in their careers, as well as a live auction for the community (the MAA moves its convention to different communities around the state) and educational events.

“It is a great networking tool for us. Everyone shares ideas,” Bennett said.

The MAA finds national speakers to bring in that are knowledgeable and well-versed in their auctioneering and/or related careers.

“The speakers we bring in are very beneficial to all of us,” he said.

This year, the convention had asked John and Billie Jo Schultz to speak. Billie Jo creates custom marketing plans for auctioneers as the owner of Auction Marketing Partners, and John is a 20-year marketing veteran working for Grafe Auction in Minnesota.

Bennett, the 2017 U.S. Bid-Calling Champion and an instructor at the Western College of Auctioneering, has some news of his own to announce.

“My wife, Elizabeth, and I recently opened our auctioneering business in the Gallatin Valley (Manhattan) called Ascent Auction Services,” he said. “It is something that has been a goal of mine since I got into the auction industry. It was the right time for us to do it. Our focus at the business is agricultural, construction equipment and real estate auctions.”

Bennett said it was a great time to get into the auction industry, and to do that, those interested most often graduate from an auctioneering college.

In the U.S., the Western College of Auctioneering is one of the most respected in the industry. Many youth from farms and ranches, as well as other rural youth, and older adults graduate from the school.

Two years ago, Western moved from Billings to its new location in Bozeman.

“Demand is high for the classes. We graduated our most recent class in October,” he said. As well as being an instructor, Bennett also graduated from the college.

There is some exciting news coming out of the college, as well.

Historically, students would come to the college from all over the country for the entire coursework of classes. That has changed, as now a major portion of the college can now be taken online.

The main course is the pre-licensing class. It is an 85-hour course for those who want a license in auctioneering. Students learn all aspects of the auction industry and acquire the necessary tools to start their career.

Each state has its own set of licensing rules and requirements.

“It is built for folks who are just getting into the industry. So folks who would like to be licensed (as an auctioneer) take the course,” Bennett said.

The course is approved in every state except Ohio and Pennsylvania.

“Coming here to the college for 8-10 days of coursework to take the pre-licensing class involved being away from home, and it was also expensive with additional costs for hotel, travel, and food. We wanted to improve that for folks,” he said.

Western shortened its “live” portion of the class to four days.

“Students only need to come here to the college for four days, and then they go home and finish the balance of the material online,” Bennett said.

They have finished one graduation class this way already in October, with 20 new graduates.

“We are charging forward with this new direction,” he said.

A lot of students travel from across the country to take the pre-licensing class.

“In fact, in our last auction class, only one student was from Montana,” Bennett said.

For those already in the auction industry, such as members of MAA, a special new class is being offered called the “Bid Calling Seminar.”

“We offer a class in bid calling, which is a live class for folks who have already been to auction college, are already in the industry, but are looking to develop and fine-tune their bid calling,” he said.

According to Western, students “train with and learn from some of the best professional bid callers in the industry, allowing them to take their chant to the next level.”

Western is offering a special online auction industry course, as well. Online-only auctioneering has become more in demand these days with new technologies.

An online-only auction is based off of a bidding platform that is hosted on the website, according to Bennett.

“It is used heavily in equipment and livestock auctions, especially for selling feeder cattle. Some of those auctions are facilitated by a live auctioneer, where folks can bid online, as well,” Bennett said.

Those who are interested in the online auction business can take the class online through Western. The class will cover all aspects on online auctions, including simulcast auctions, which seedstock breeders might use to sell bulls, for example.

“Folks will learn about the most up-to-date technologies and best practices being used in the online-only auction industry,” he added.

Livestock producers in the Gallatin Valley area who might be interested in Bennett’s Ascent Auction Services can call 406-616-2202. For those interested in the Western College of Auctioneering, please visit the school’s website at https://www.auctionschools.com.

Dry conditions toward the end of 2020 have led to low snowpack in the southwestern mountain ranges of Montana.

2021 MAGIE show to be held virtually amid COVID concerns

Produced annually by the radio station 560 KMON, the Montana Agricultural and Industrial Expo (MAGIE) has come to be recognized as one of the …

In the foothills of the Tobacco Root Mountains, Dave and Jenny Scott, co-owners of Montana Highland Lamb, raise sheep on grass through regener…

Montana Pro Rodeo Circuit Finals to be held in Kalispell

Like so many other events in 2020 and those set for early 2021, the 42nd annual Montana Pro Rodeo Circuit Finals has been forced to modify thi…

Nick Bennett at a past MAA convention.

These students are the most recent graduates of Western College of Auctioneering in October 2020. It is the first class to take part of the college course online, and part in-person.