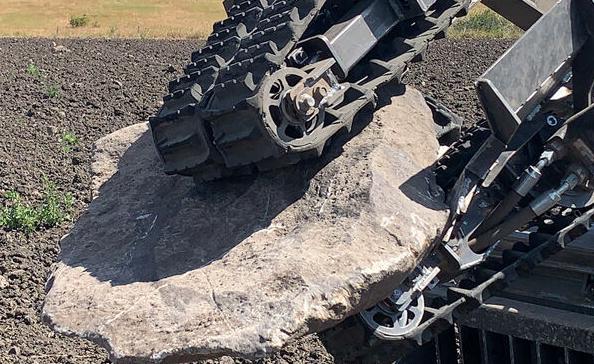 Josh Frei, TerraClear engineer and operator, picking a field for a farmer in Grangeville, Idaho, and showing how rocks of all shapes can be picked. Courtesy photo. 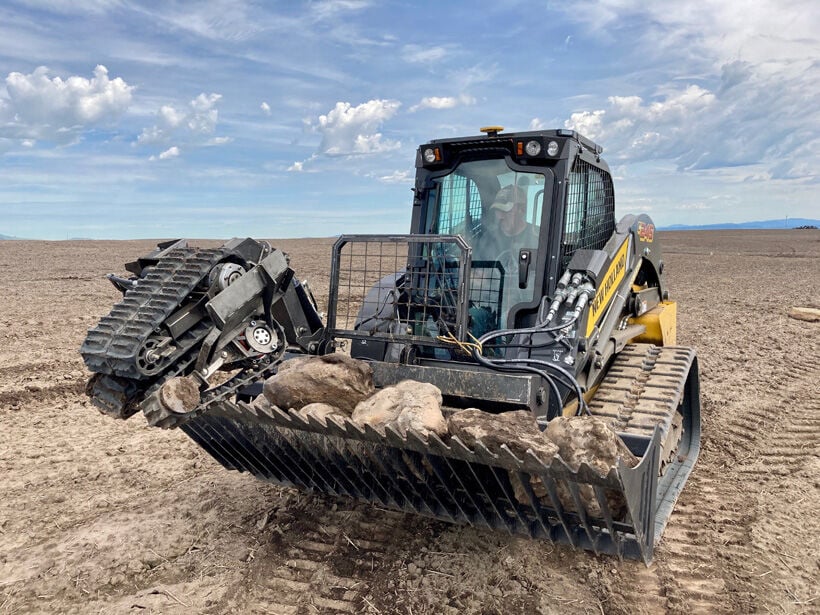 Ryan Frei, TerraClear operator, picks rocks for a farmer in Grangeville, Idaho. TerraClear has developed the automated Rock Picker for farmers. They also created a mapping tool to go with it, where a drone can be flown and a map of rocks in a field created. Photo courtesy of TerraClear.

What happens when a precision ag tech-minded son goes home to help Dad on the family’s Grangeville, Idaho, farm, and is sent out to pick rocks by hand?

If he is entrepreneur Brent Frei, founder of two software design businesses, he thinks of automation picking up the rocks for him – a robot rock picker of sorts.

While Brent was out there for hours picking up rocks for his now 85-year-old father, Ron Frei, he thought how automation could not only pick up rocks, but map rocks in the field so farmers could pick rocks on their own timeline.

Their first product is the automated Rock Picker, which farmers can mount on their skid steer or front-end loader.

The Rock Picker went through several prototypes with farmers making suggestions at every step, according to TerraClear’s president, Trevor Thompson.

“We listened to farmers as we developed our prototypes and that has continued today. We’re always trying to learn and listen, to understand farmers: how they would use this tool, how they see this problem, and how we can solve it in the best way possible,” Thompson said.

TerraClear’s Rock Picker picks up 400 rocks per hour – rocks that are as small as 4-6 inches wide to boulders that weigh up to 300 pounds.

“We were surprised at how well it performed this past spring in different areas and farm fields,” he said, adding that the first 12 units the company built sold out immediately.

TerraClear’s Rock Picker is different from other rock pickers out there that just shovel in everything in sight. The Rock Picker is selective, picking up the rock and leaving the precious soil and stubble behind.

“The idea of precision picking or picking from the top down is to just grab the rock and not all the precious soil and stubble, or debris around it or beneath it,” he said.

The Rock Picker has a unique robot arm that reaches out with a huge “claw” on the end that is actually two sets of tracks that are running in opposing directions.

The opposing motion tracks open up and grab and run the rock quickly up the track like a heavy-duty conveyor belt, pulling the rock quickly into a large collection basket before going after the next rock.

“The opposing tracks just suck the rock right up into the bucket, and rocks of all shapes can be picked up,” he said.

TerraClear made a commitment at the beginning of the design work to bring the most useful, precision ag technology to farmers with the Rock Picker, and to make it easy to operate, as well.

“One of the priorities on design is that anyone on the farm can use the Rock Picker very effectively, whether they are older or younger, skilled or a not-so-skilled operator,” he said.

They designed the Rock Picker to be operated with a joystick that can be moved left or right over the rock, and then a button is pushed and held to start the picking action.

In addition, TerraClear committed to designing the Rock Picker so it could be used in a field that had already been planted.

“It has always been very important that our design enables picking in a seeded field,” he said. “Farms are always under pressure to get their seed into the ground as quickly as possible. There is this really tight window to seed, and that's why people go out and pick by hand because it's the only tool today other than ours that they can use after they seed. “

TerraClear designed a drone-mapping tool, the TerraClear Rock Map to go with the Rock Picker to map out every rock in the field by size and location.

A drone is launched, flown over the field, and pictures are taken with the drone’s camera of the whole field the farmer wants to pick rocks on.

“Those pictures are then processed through models that we’ve developed using artificial intelligence. This approach allows us to quickly identify where all the rocks are and filter them by size,” he said.

The farmer can load the map and jump into his skid steer mounted with the Rock Picker and head exactly to the location of the rocks.

“The map becomes a more challenging problem when you have a lot of trash in the field and there’s a ton of residue,” he said. “Right now, the way the technology works is you have got to see the rock. And so if it’s visible on the surface, then there’s a good likelihood that we can see it and produce a map.”

The map tool makes it easier for farmers to pick rocks on their own timeline.

“What farmers could do is fly the field with the map tool prior to seeding or after they seed. Then they’ve got their map of where those rocks are and the rocks aren’t going to move until after harvest,” he said. “While there may be more growth in the field when they go out to pick rocks, they still know where their problematic rocks are and they can go out on their timeline.”

The Rock Picker is the second tool in the combo.

“If you have your map loaded and you want to get rocks in a quarter section of land, a big area, you only have to go to those rocks rather than search the whole field,” Thompson said.

Initially, TerraClear wanted to market the drone mapping tool with the Rock Picker, but when they showed the tools to farmers, the farmers were saying, ‘We need the Rock Picker right now. Can we just have that?’”

Thompson said they sold the Rock Picker separately to some farmers because they saw how desperately the farmers wanted to get the rocks picked in an efficient way.

TerraClear sees the combo tool as a rock picking service that crop services or cooperatives do for their farmer/members.

Their precision ag vision is someone mapping the field with a drone or another tool, feeding that information directly into an autonomous vehicle, which goes out and picks up rocks on its own.

The farmer can seed or spray one field while the rocks in another field across the farm get picked by the autonomous picker.

“We call it ‘Auto Pick’ and we are spending a lot of time on this technology right now,” Thompson said. “We’re excited about the added automation and whatever we can do to simplify these tough jobs for farmers.”

This year, the team is taking the Rock Picker to a few field days in North Dakota, and then they are going down to show it to a co-op in Iowa.

Currently, they have sold their Rock Picker separately to farmers in Idaho, Washington, Minnesota and Pennsylvania.

TerraClear plans to build more Rock Pickers this fall, and they are taking pre-orders because like every manufacturer, they are experiencing supply chain disruptions.

To pre-order or find out more about TerraClear’s Rock Picker, visit their website at www.terraclear.com, or call at 208-451-2876.

Food ingredient buyers on the search for high protein peas

SIDNEY, Mont. – While some pulses have taken a downturn in interest from end-users, yellow peas continue to command attention from food ingred…

According to the Montana Cooperative Development Center (MCDC), co-ops have been a part of the fabric of the Montana’s economy nearly as long …

Always be thinking about safety when on the farm, ranch

In 2020, the seventh most dangerous profession in the United States was farming and ranching. When it comes to working with large equipment an…

While Montana’s climate is absolutely ideal for growing malt barley, how does it fair for hops? Tom Britz, owner and CEO of Glacier Hops Ranch…

Josh Frei, TerraClear engineer and operator, picking a field for a farmer in Grangeville, Idaho, and showing how rocks of all shapes can be picked. Courtesy photo.

Ryan Frei, TerraClear operator, picks rocks for a farmer in Grangeville, Idaho. TerraClear has developed the automated Rock Picker for farmers. They also created a mapping tool to go with it, where a drone can be flown and a map of rocks in a field created. Photo courtesy of TerraClear.