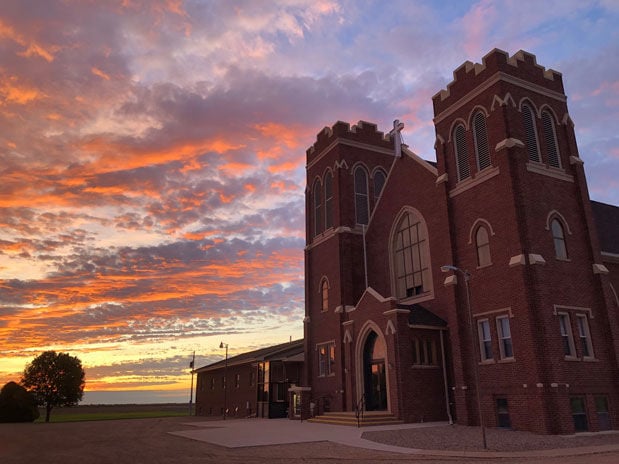 St. John Lutheran Church of Dimock, S.D., is lit by a summer sunset. 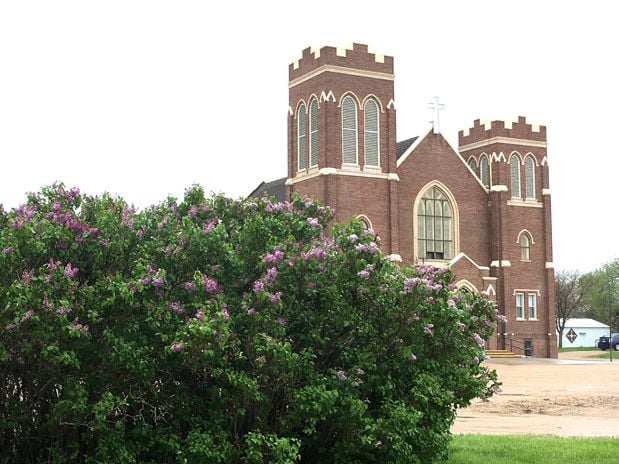 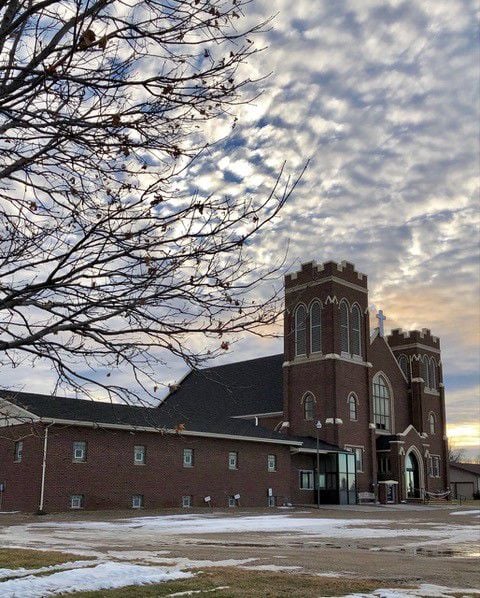 Clouds form over St. John Lutheran in this winter scene. 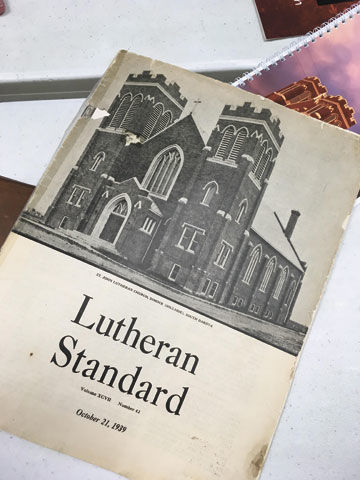 St. John is featured on the cover of the 1939 Lutheran Standard magazine. 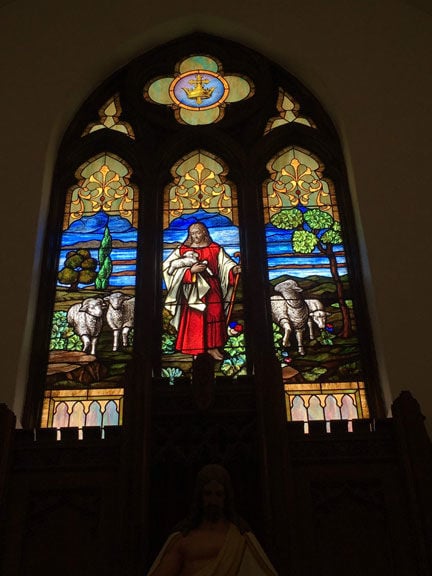 A stained glass window of Jesus carrying a lamb graces the nave of St. John Lutheran Church of Dimock, S.D. 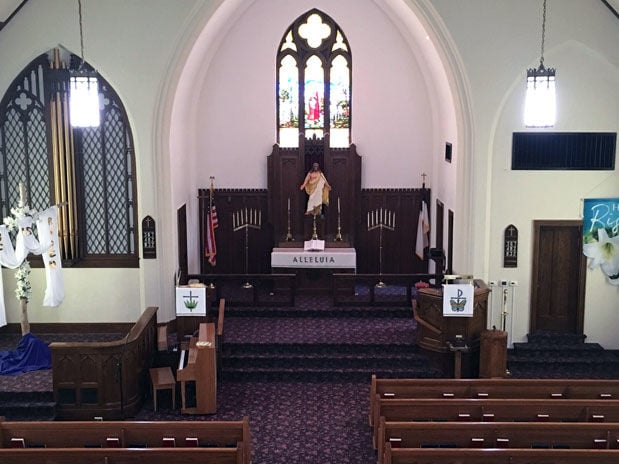 From the balcony, Easter altar displays can be seen at St. John Lutheran. 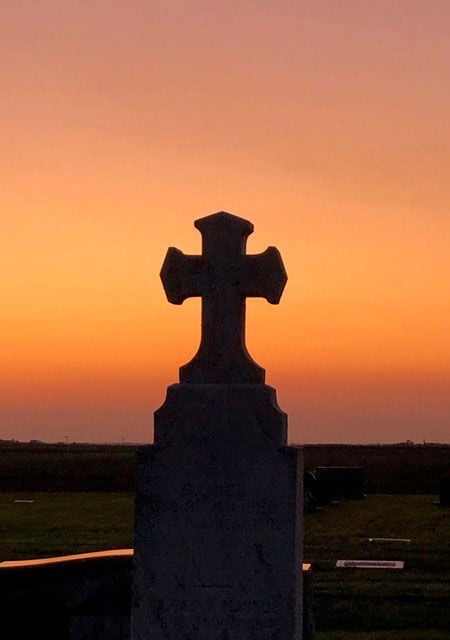 A cross on a stone in St. John Cemetery is silhouetted in the sky. 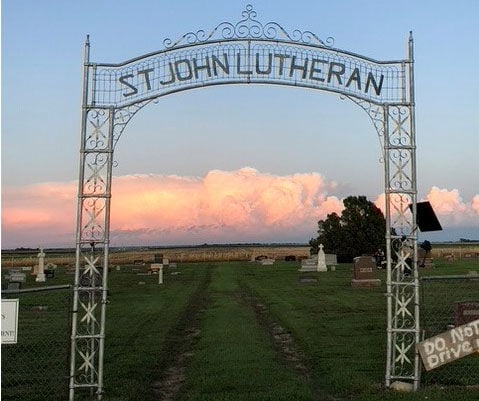 An archway marks the entrance to St. John Lutheran cemetery near Dimock, S.D. 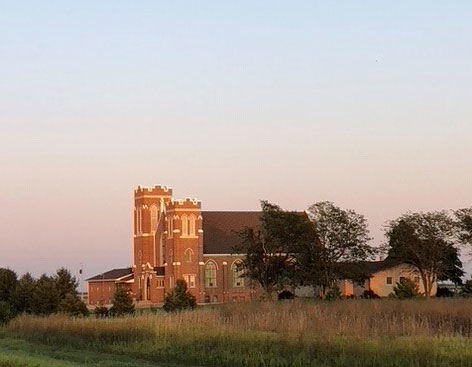 St. John Lutheran Church is seen from a distance down the country road.

St. John Lutheran Church of Dimock, S.D., is lit by a summer sunset.

St. John is featured on the cover of the 1939 Lutheran Standard magazine.

A stained glass window of Jesus carrying a lamb graces the nave of St. John Lutheran Church of Dimock, S.D.

From the balcony, Easter altar displays can be seen at St. John Lutheran.

A cross on a stone in St. John Cemetery is silhouetted in the sky.

An archway marks the entrance to St. John Lutheran cemetery near Dimock, S.D.

St. John Lutheran Church is seen from a distance down the country road.

St. John Lutheran Church sits on a rocky ridge west of Dimock, South Dakota. There was no shortage of rocks that members hauled to the church site and crushed for cement or used for the church foundation.

“God was figuring for expansion because he put a lot of rocks here,” church member Jim Neugebauer said.

The double-spired brick church was built around 1930.

Betty Metzger remembers stories her mom would tell from that time. Her family with 12 kids grew up nearby, and anyone that could pick rocks did.

The teenagers had the job of running the crusher, and it was hard work. They were instructed not to throw the hard, black rocks into the machine, but when they were aching for a break, that’s what they did. The dense rocks broke down the machine and the boys stood by while it was fixed.

The rocks made for a sturdy foundation, and the walls are made of four layers of brick. The solid construction helped the church withstand a devastating tornado that wiped out the parsonage and leveled many farmsteads in the area May 21, 1962.

As the story goes, one man was at the church when the twister tore through. He had come for the regular brotherhood meeting, and he took shelter in the basement furnace room. As the winds picked up, he could hear the pipe organ whistling. He’s quoted as saying “I thought the angels were coming.”

An earlier church of the St. John congregation wasn’t spared by Mother Nature. The first church building was destroyed by lightning. The second was moved to Armor, South Dakota, but it took the slow route. The old, steepled building was raised up and moved by horses a half mile from its original site. The progress stopped when it was time to plant corn, members said, and the church sat in the road all summer. When the ground froze enough to support the heavy load, the transport resumed.

Farmers supported the church in the early 1950s by donating loads of corn. Two or three corn cribs were set up beside the church, and farmers brought their ear corn to fill them. They collected as much as 1,000 bushels of corn, members said. It was shelled in December and sold at the elevator in Dimock with proceeds going to the church.

The church members have long been generous givers. An annual Mission Festival raises money to support the mission cause. In reacent years, St. John has been the top giver in the nation among the synod’s churches. Pastor Erika Lehmann created the Holy Cow award to encourage other churches to give. It’s a friendly competition among churches, and the winner gets a traveling Holstein cookie jar.

One farmer, Otto Storm, was a bachelor who died a millionaire, according to church members. He gave most of his money to the church, and although he had no children of his own and he never went to high school, he wanted it to go toward education for young members. An endowment set up with his donation funds scholarships for every college student at $1,000 or more for all four years of their university education. It also pays fees for those attending Bible camps or seminary.

Eleven St. John members have gone on to become pastors or missionaries. Al Goldammer is one. He created such a connection with the church he grew up in that after 50 years of preaching in other congregations, he chose to retire near St. Johns.

Members of St. John come from communities all around southeastern South Dakota. The church is like the center of a wagon wheel, Neugebauer said. Churchgoers come from Parkston, Dimock, Mount Vernon, Stickney, Corsica, Ethan and Mitchell.

When the church was first built in the early 1930s, there were 150 families that made St. John their church. It had 340 confirmed members and 650 baptized. Today, there are 290 members in all. Each family is honored with a square on the quilts that hang around the fellowship hall. They were made for the congregation’s 125th anniversary. In 2020, the congregation will celebrate 140 years.

Darrell Mueller is proud that his family has stayed close to the church for generations. His great-grandfather is buried in the cemetery, and today his two boys come to church there.

“The tradition carries down the line around here,” Mueller said.

In early days of the church, families sat separately with men on the left, women on the right and children in the front pews. In strict German fashion, the children knew to behave. Most only had to be scolded once and they learned respect, Metzger said. It’s a quality that makes her proud.

She remembers when sermons were given in German. She didn’t understand a word. Most kids didn’t, and it was hard for them to stay attentive and keep out of trouble, she said.

Once kids were confirmed, they moved to the balcony. There, one boy had the job of sitting beside the old organ and pumping the wheel to fill the bellows.

“That was my dream job,” Goldammer said.

In the late 1940s, the congregation raised money for a pipe organ, and it replaced the old hand-crank before Goldammer got the job he was pining for.

Music has long been a bright spot for the St. John congregation. For years, the church band had a show on WNAX radio in Yankton. Their talents extend to theater as well.

At one end of the basement hall is a stage draped in a blue curtain. The youth of the church once put on plays that were the draw of the community for two nights. Metzger directed many of the comedies. “They’re kind of roll-on-the-floor crazy plays,” she said. The pastor, who reviewed the scripts had just one rule: no gun play. The performances were held Sunday and Monday nights, and the kids served tavern sandwiches, pie and ice cream.

The church holds a special place in Metzger’s heart. She remembers spending quiet afternoons cleaning the church, and when she was done she would sit in the pew closest to the altar and pray.

“My goodness, that was just like I was talking to the Lord, I was so close,” she said.

For Glenn Storm, it is important to have the support of members to lift each other up in prayer, bring food to each other’s homes in times of need and organize benefit fundraisers.

If you have a suggestion for a rural church to feature here, contact editor Janelle Atyeo at jatyeo@tristateneighbor.com.

Now in its fifth year running, Prayers on the Prairie is a winter feature that highlights rural churches across our coverage area.