In nearly 100 years of FFA history in South Dakota, the state convention has been held on the South Dakota State University campus in Brookings, but this spring, the event is set to move West River.

Organizers say it’s important to meet in person this year after COVID-19 caused the 2020 convention to take place virtually. The pandemic was behind the move to Rapid City as well. Restrictions on social gatherings and outside visitors are still in place on the SDSU campus, and if case numbers spiked, there was a possibility an event would be canceled last-minute.

“We might be only in-person convention in country this year. We’re looking forward to being able to do it in person,” said Dani Herring, who took over as the state organization’s executive secretary last June.

The virtual convention last spring just wasn’t the same, said Hunter Eide, a freshman at South Dakota State University who is serving as secretary on the state officer team.

He was a senior at Gettysburg High School when he watched last year’s convention on a screen. He missed the excitement of an in-person event, he said.

“Hearing your name called as first place or being recognized for a state degree – it’s an amazing feeling. There’s nothing like it,” Eide said.

He’s looking forward to this year’s convention where he and his fellow state officers will give their retiring addresses. Mostly, he said he’s excited for the high school freshmen and sophomores who have never before had the experience of a state convention. The energy of the state event will make a great first impression and get them excited about FFA, Eide said.

“We pride ourselves with being a hands-on organization,” Herring said.

It’s difficult to replicate some FFA competitions virtually, she said, listing floriculture, milk quality judging and ag mechanics as a few examples. It’s also important for kids to get the opportunity to network with other students, and experiencing being in a room with judge, she said.

Herring was an ag teacher in Wall, South Dakota last year before joining the state office. She had a few of her more dedicated students participate in career development events virtually, and the retiring state president was from Wall.

She feels bad for seniors who missed the chance to get their state degrees in person.

“It was different,” Herring said. “We did the best we could.”

That’s why FFA staff and ag teachers really wanted to provide an in-person convention, she said. The South Dakota FFA Association Board of Directors voted at their meeting Jan. 22 to hold the convention in Rapid City.

South Dakota FFA started in 1928, and since the beginning the state convention has taken place on the campus of what was then South Dakota State College.

Only during World War II was the convention canceled because of gas rationing, and 1942 they didn’t have Zoom as an option. The late Marvin Haag from the Parkston FFA chapter was state president that year.

Clark Hanson of Brookings is compiling a history of South Dakota FFA, and he spoke to Haag shortly before he died. While he didn’t have any specific comments about missing out on the state convention, he discussed the tough days a small family farm like his endured, working two quarters of land with a few cows and hogs.

Haag competed with FFA as a member of the crops and livestock judging teams. He was surprised at being elected to the top office as a high school senior. As Hanson tells it, Haag remembered coming out of the meeting with a chuckle and said, “It must have been my good looks.”

Hanson is professor emeritus of agricultural education at SDSU, having retired fully in 2013. He started his FFA history project in 2017 to coincide with the 100th anniversary of the Smith-Hughes Act, the legislation that provided federal funding for vocational education, including agriculture.

He’s been writing regular articles, which he’ll wrap up this year. They’re all posted to a website, accessible at sdffafoundation.org/History. He hopes FFA chapters will contribute their own history and that a group will step up to keep the website up to date for years to come.

Hanson was impressed with last year’s effort to pull off a virtual convention and provide the students some recognition for their hard work. But he hopes future conventions will return to SDSU.

With the number of SDSU and FFA students on campus this spring, it would be challenging to host a convention in a way that would keep them all safe, said Dr. John Killefer, Dean of the College of Agriculture, Food and Environmental Sciences.

“The FFA convention is certainly an important part of SDSU each year,” he said in an emailed statement. “We wish the FFA officers and leadership a very successful convention this year and certainly look forward to welcoming them back to our campus in the future.”

That’s the plan so far, Herring said, but this is a good year to test to logistics of moving the event should the board decide they want to relocate in the future. She’s been impressed with how the Rapid City chamber and other groups have stepped up to make them feel welcome. Herring was busy putting plans in place in early February while in town for the Black Hills Stock Show. For the first time this year, FFA put on an Ag Adventure Zone with educational exhibits and presentations.

The state convention in Rapid City will come with some modifications due to COVID. Attendees will be limited to the five qualifying teams from each district, and spots can’t be transferred to other schools. There will be no talent or choir performances.

In an effort to limit the times multiple chapters are gathered in the same place, there will be just two general sessions to give awards and for the state officers to give their retiring addresses. Kids receiving some of the bigger awards like state degrees and star awards will get two additional tickets to the banquet for parents to attend. Otherwise, the hope is that the convention will be streamed virtually for people to watch from afar.

Across the country, FFA organizations are pensively approaching convention season. Many states are planning virtual events, some are planning a hybrid of in-person and virtual, and some are pushing back their convention dates while they wait to see virus trends.

“There is a lot of unknown at this time,” said Kristy Meyer, spokeswoman for the National FFA Organization. “I think all of our hope springs eternal.”

National FFA leaders hope to decide in May or June what this fall’s national convention will look like.

The 95 chapters that make up the South Dakota FFA will celebrate National FFA Week Feb. 20-27. It’s a time to share what FFA is and the impact… 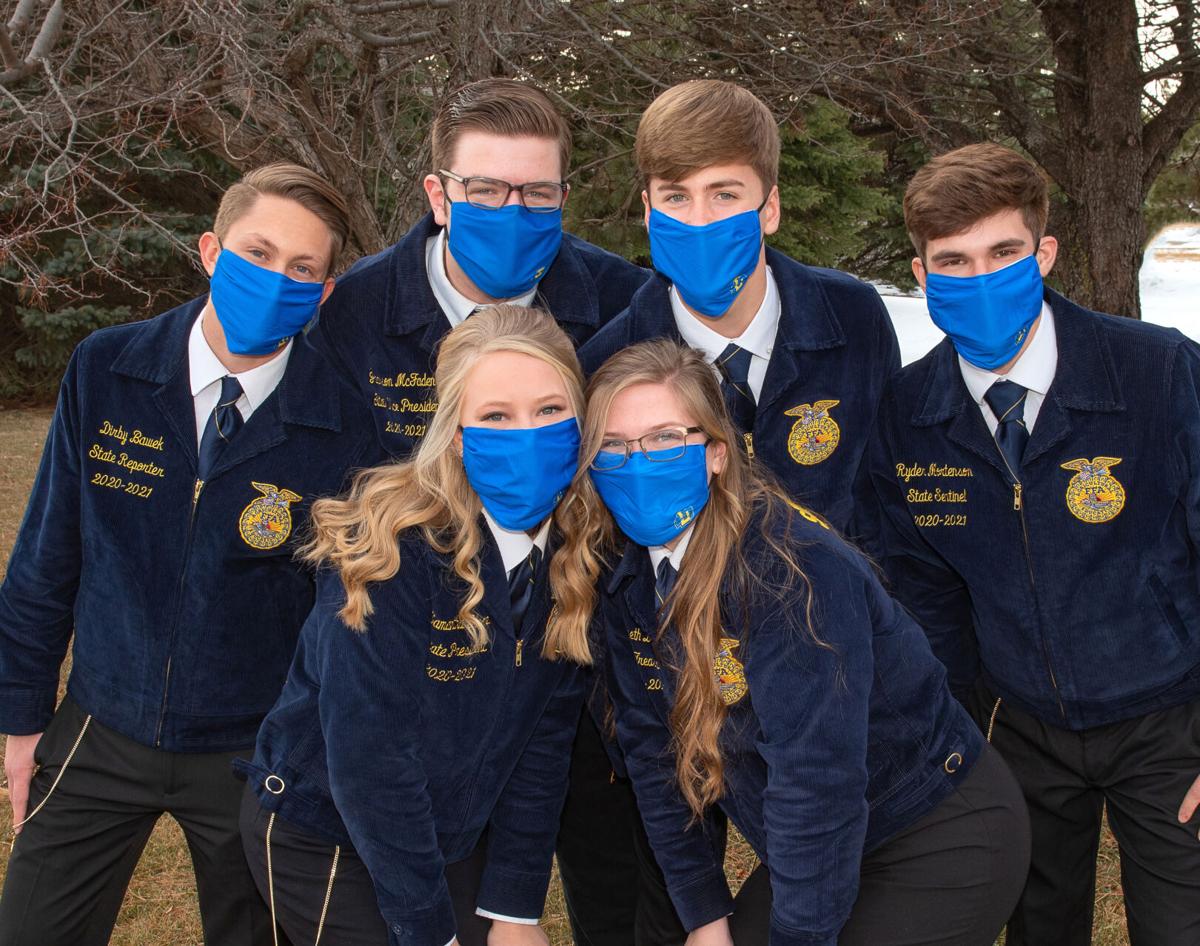 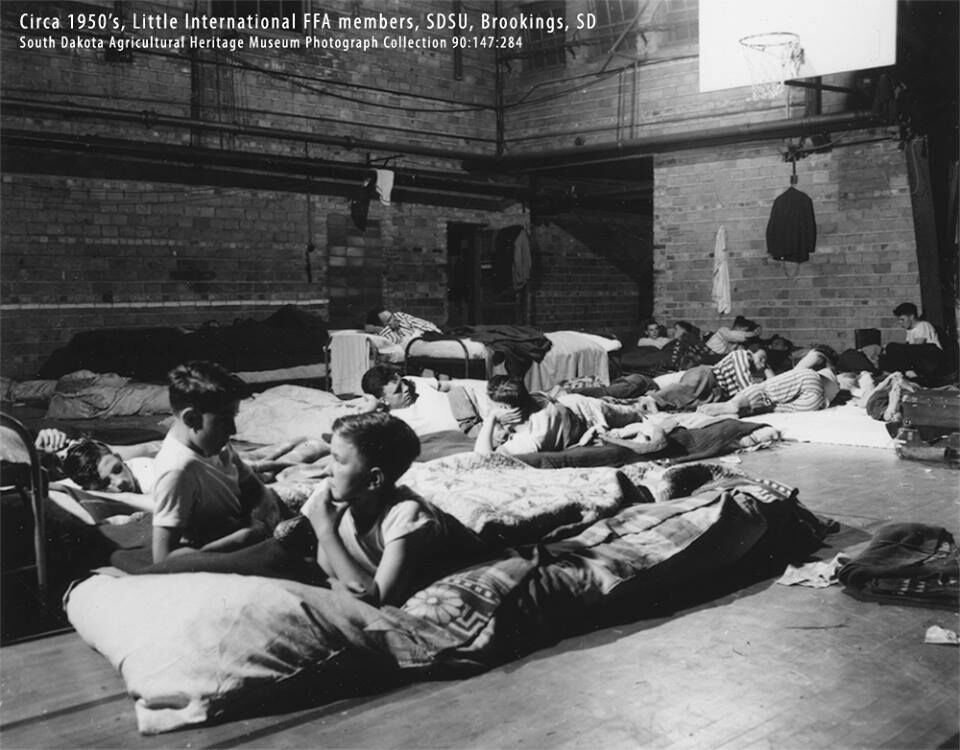 FFA members lay on cots in the ROTC building during the Little International event on the South Dakota State campus in the 1950s. They stayed there during the state convention, too, which was for boys only at that time. Later, boys were housed in the Intramural Building, known as the BARN, and girls overnighted in the ROTC building. This was a big part of convention housing until Brookings got more hotels, FFA Foundation Executive Director Gerri Eide said. 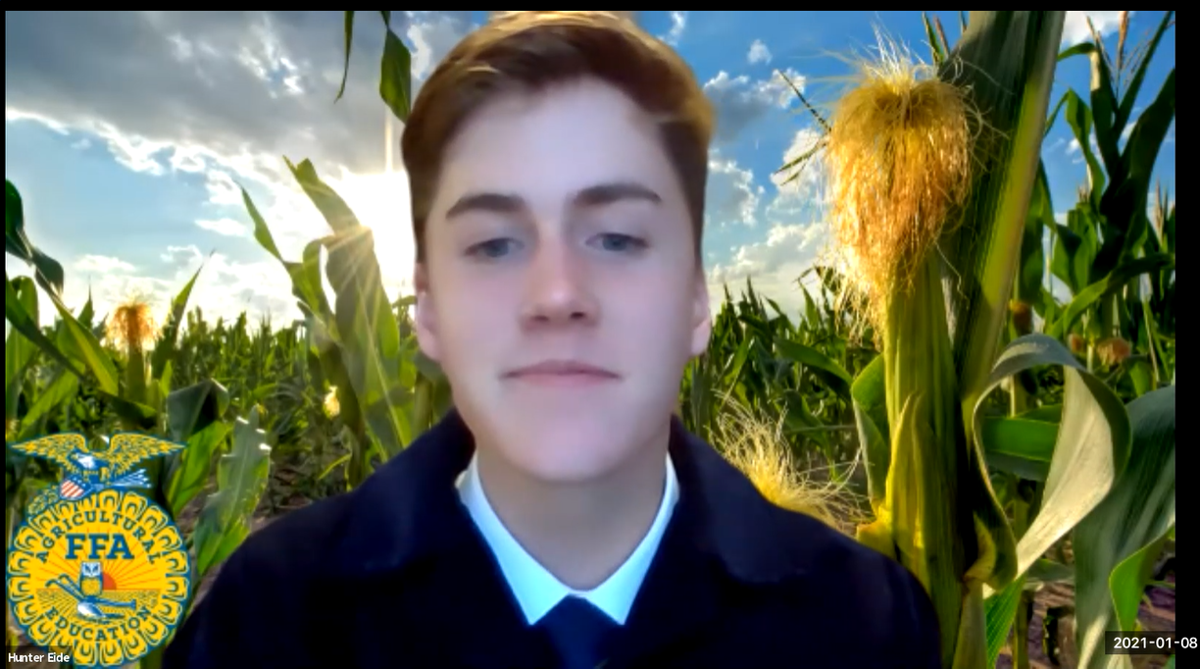 South Dakota State FFA Secretary Hunter Eide participates in a virtual event this winter. He and his officer team have been doing a mix of in-person and virtual visits. He said he enjoys hearing what others are going through and seeing where he can help out. "Each person is going through a unique experience. Each of their stories is different," he said.