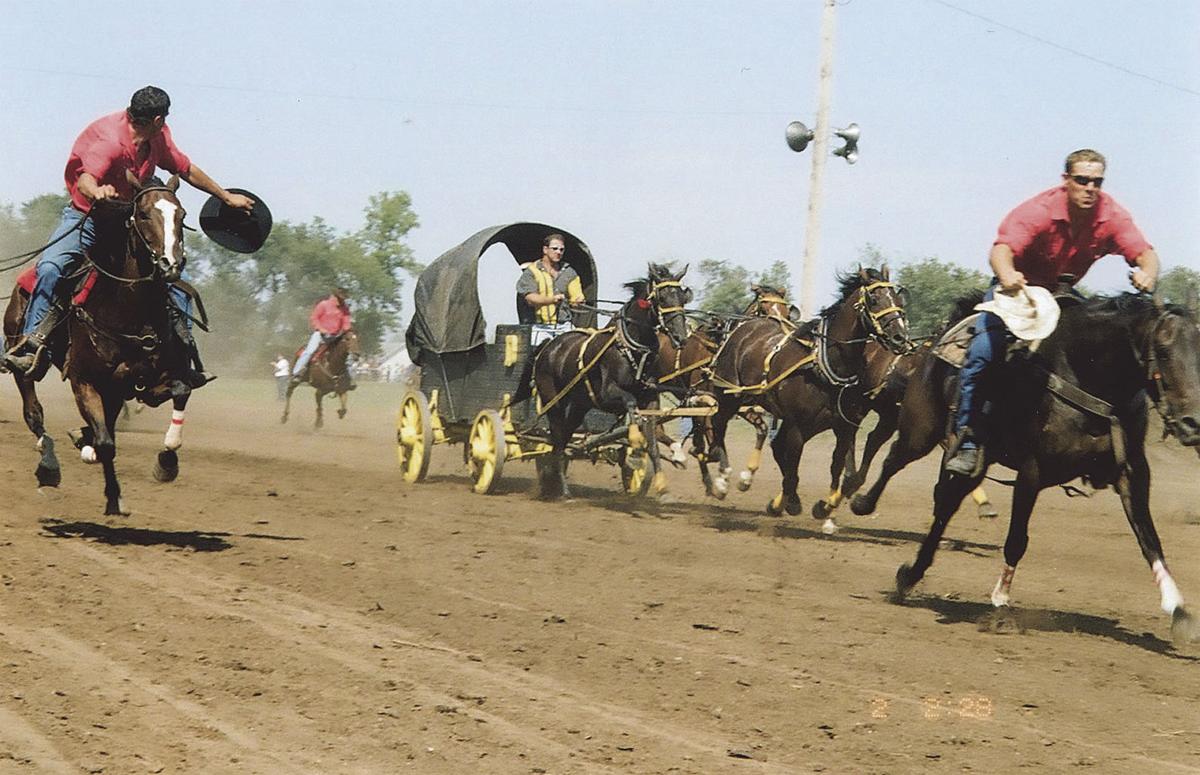 Chuckwagons will race for the last time at the Clay County Fair Sept. 7 and 8. 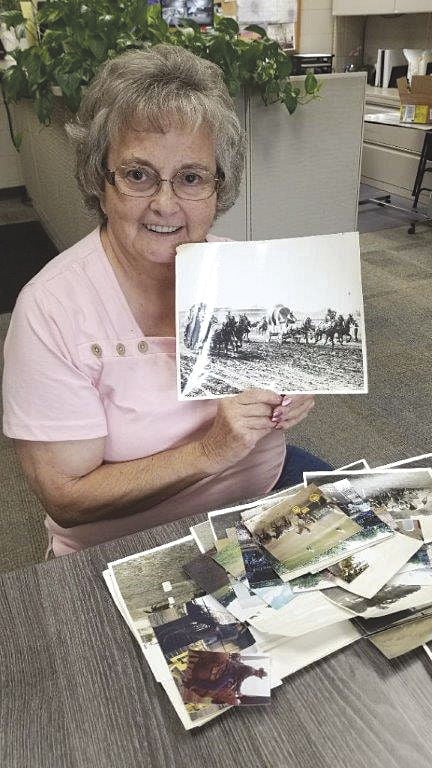 Ellen Essick displays a photo of past chuckwagon races at the Clay County Fair.

“My heart is broke in a million pieces. Chuckwagon racing has been a way of life for the Essick family. We have lived it 24/7 for 54 years,” said 72-year-old Ellen Essick, as she wiped a tear from her eye.

The Chuckwagon Racers of Iowa-Minnesota announced earlier this year that the organization was disbanding after the final race at the end of the season which happens to be the 2019 Clay County Fair. The organization is comprised of a group of horsemen who work at their trades during the week and just happen to like to race chuckwagons in their spare time.

“We had eight wagons and two wanted out. We couldn’t replace them. That left six wagons. Now three more want out which leaves three wagons and we can’t find anyone to take them over,” said Essick, who has been attending and participating in chuckwagon races since 1965.

The late Stub Johnson, of Spencer, the late Harold Hesser, of Jackson, Minnesota, and the late Kenny Uden, of Alpha, Minnesota started the association in 1957 as a “still day” meaning, according to Essick, not appearing at the fair. Chuckwagon races started competing in front of the grandstand at the Clay County Fair in 1962.

“When our sons were 13 and 14, they began riding in chuckwagon races,” Ellen said. Son Randy, who works for UPS during the week, now owns half of the “Black D” team. Son, Donnie, who works at Bomgaars, in Spencer, is now a wagon judge.

The Black D team races eight to 10 times a year at county fairs mostly. Essick’s two grandsons are outriders now. Don was elected secretary of the association in 1977.

“That meant that I got to do the work. I held that position for 20 years. Then I was out for 17 years and now am in my fifth year as secretary of the association again,” she said.

In addition to serving as secretary, Essick was a powder puff favorite for many years.

“In 1980 the powder puff division started. The powder puff varies as there is only two out riders and they do not swing on like the men do. Someone asked Don if he could put a wagon together for the powder puff. I was standing right there and heard the powder puff deal. I told Don that if Black was going to have a powder puff entry, I am driving which I did for 20 years. It’s the most fun I’ve had with a horse,” said Ellen, who was raised on a farm as a child but never had horses.

For those who may be unfamiliar with chuckwagon races, Ellen said first the horses have to be broke to drive on the wagon.

“The outriders have to practice. One throws the tent poles in the wagon. One throws the stove in the wagon and one guy holds the three horses behind the wagon. All three mount and one out rider holds onto the lead team. It is a timed event. If the stove man, for example, missed the box, then they get penalty seconds added onto the score. The first and second place finishers win trophies and cash prizes. Fairs pay the association to put on the races,” she explained.

“We used to fill the grandstand at Spencer. I would say chuckwagon races are a show for the older generation. It is interesting to note that 90% of the horses used in a chuckwagon event are chosen out of a kill pen at a horse auction. We actually save their lives,” she said.

The expense of the horses, the cost of the wagon and traveling expenses make this sport and hobby costly. Essick said that most of those involved “do it ‘cause they love it.” She added that chuckwagon racing is a good, clean and exciting program.

“Anytime you lose an event that has been at the Clay County Fair for years, it is sad. It (chuckwagon races) really is a tradition for fairgoers. But times change. The fair can’t stay the way it was either. Unfortunately, we will have to move on without the chuckwagon races in the future,” Clay County Fair Manager Jeremy Parsons said.

As she has done more than a hundred times in the past, Essick will assist the announcer in the crow’s nest at this year’s Clay County Fair.

“I was at a loss when Don died. The end of this organization is another loss in my life. I have no idea what I’m going to do with my time. We are plugging this last race at the Clay County Fair as the ‘Final Ride.’ But I’m hoping it’s not,” she added.