Scott Stahl is raising the fifth generation on his farm near Bridgewater, South Dakota, and he wants farming to be an option when his kids grow up.

He looks to the farm bill to help “ensure a future for rural America,” as he put it while hosting a panel discussion with local and national ag leaders in his tidy machine shed June 28.

Stahl is the president of the South Dakota Corn Growers Association, the group that organized a panel of South Dakota’s ag organizations. They got an audience with the minority chairman of the House Agriculture Committee. Pennsylvania Republican Rep. Glenn “GT” Thompson spent the day focused on South Dakota agriculture as the guest of South Dakota Congressman Dusty Johnson. The two toured the new precision ag building on the South Dakota State University campus in Brookings and spoke at the National Holstein Convention in Sioux Falls.

In between, they spent a couple hours at the Stahl farm. Sitting between Stahl’s green baler and sprayer, the group relayed their priorities for the 2023 farm bill. The consensus: don’t mess with crop insurance.

“It’s a program that works well,” said Scott VanderWal, president of South Dakota Farm Bureau. “It’s all in the name of ensuring our ag industry remains able to feed our people.”

“This is such a critical safety net for producers in rural America. Let’s do no harm,” said Caitlyn Davis, an agent with Breske Crop Insurance in Webster.

The challenge, Stahl said, was to maintain a safety net for farmers and make it relevant to today’s needs.

Austin Havlick, newly elected to the South Dakota Cattlemen’s Association’s regional board, recommended some improvements to insurance products livestock producers rely on. For one, it’s difficult for producers to plan their forage insurance needs in the fall when farmers might change their plans and plant those acres with corn or soybeans.

Havlick also sees issues with the pasture rainfall insurance. In some cases, insurance won’t kick in for a producer because the nearest weather station recorded rain while they're experiencing drought conditions more locally. Especially in the Black Hills, he said, there are not enough weather stations to record local weather.

A few ag leaders had suggestions for supporting beginning farmers. Loans for those starting out need to be higher than $50,000 or $100,000, given the cost of equipment, said Craig Andersen, past-president of the South Dakota Pork Producers Association.

“The caps on loans are infeasible,” said the producer from Centerville.

Davis, the crop insurance agent, said it would help if beginner farmer programs were extended beyond the five-year timeframe because many farmers are still in debt at that point.

In light of the recent boom in carbon credit programs, the farm bill’s conservation programs could get an update.

Like carbon credits, many conservation programs require the farmer to take on a new or different approach. There are no incentives for those already using conservation-friendly practices.

Former Nebraska Secretary of Agriculture Greg Ibach, who after a stint with the U.S. Department of Agriculture in the Trump administration now serves as undersecretary in residence at the University of Nebraska’s Institute for Agriculture and Natural Resources, advocates for changing the way farm bill conservation programs work.

“Rather than practice-driven, they should be based on outcome,” he said, speaking at the South Dakota Governor’s Agricultural Summit in Brookings June 22.

Ibach, who is the fifth generation on his farm near Sumner, found the federal incentives weren’t worth it for him to enroll in a conservation program this year. His ground has been managed long term without tillage, and he uses rotational grazing. New practices would have cost him more to implement than the incentive paid, he said. He’d like to see farms rewarded based on the scale of the conservation practices.

The University of Nebraska has been analyzing farm data from the last 40 years to determine what sort of impact certain practices have on sequestering carbon. Ibach believes that can play into rewarding long-time conservation efforts.

Such practices will play a bigger role in America’s food production as more consumers demand it, he believes. He predicts packages will someday display a sustainability score based on how the food was grown.

Havlick of the South Dakota Cattlemen would like to see livestock worked into the Conservation Reserve Program, given that the animals play a role in conservation and soil health. He suggested a cost share for water tanks on CRP land.

Following the panel discussion at his farm, Stahl said it’s important for Washington delegates to see the people and the operations affected by their decisions.

While the farm bill directly impacts how farmers in South Dakota do business, it’s a program that affects more than just Midwestern farmers. The visiting Congressman made clear that he was aware of that.

“It’s important for every American family, no matter what your zip code is,” Thompson said.

“If you take care of the land, the land will take care of you.” That was the message when Scott Kolousek addressed a crowd of about 30 on his farm near Wessington Springs during a soil health tour July 21.

As attendees dined, speakers from all sectors of agriculture spoke about the importance of farming to feed a hungry world.

Summer is winding down, and outdoor farm shows are heating up, including South Dakota’s big one – Dakotafest, set for Aug. 16-18 on the easter… 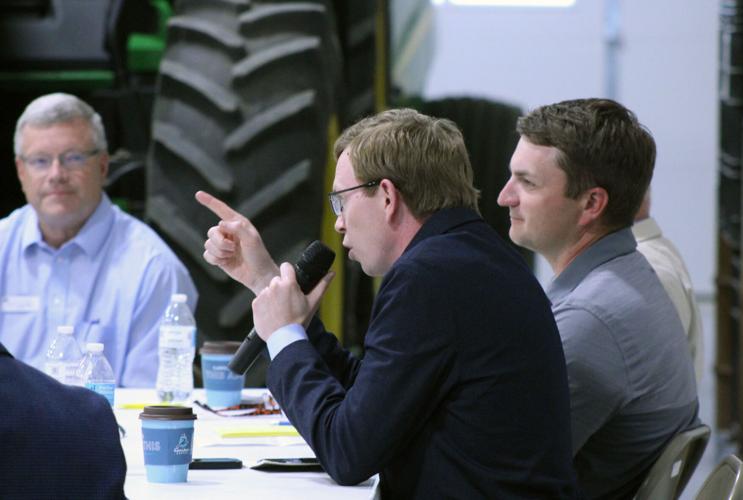 Congressman Dusty Johnson speaks during a panel discussion about the 2023 farm bill, held at the farm of Scott Stahl, right, near Bridgewater, S.D. Stahl is president of the South Dakota Corn Growers Association. 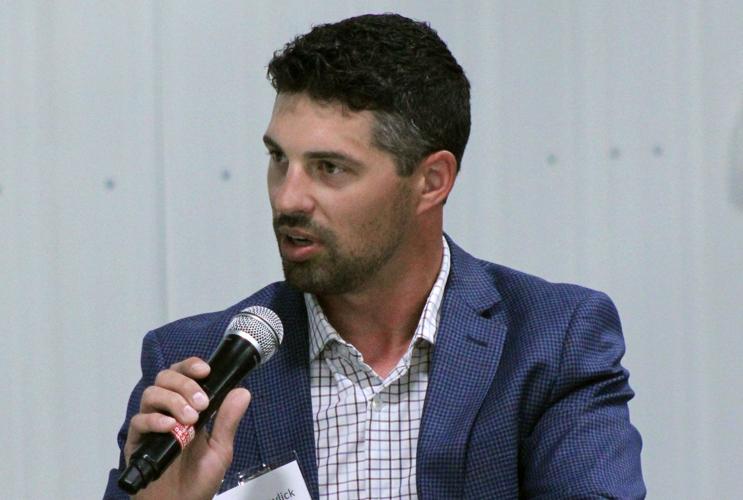 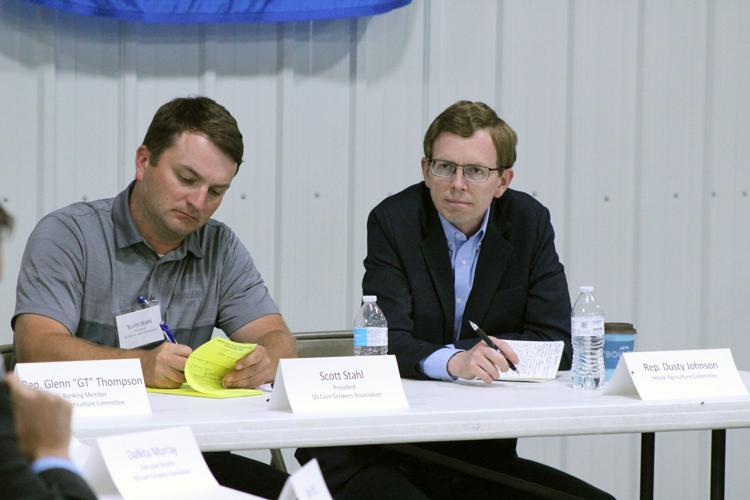 Bridgewater farmer Scott Stahl and Congressman Dusty Johnson listen to suggestions for the 2023 farm bill at a panel discussion held at the Stahl farm June 28. 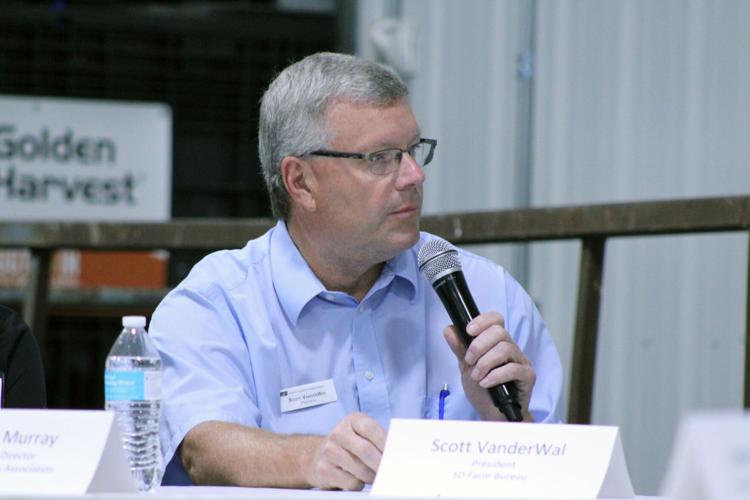 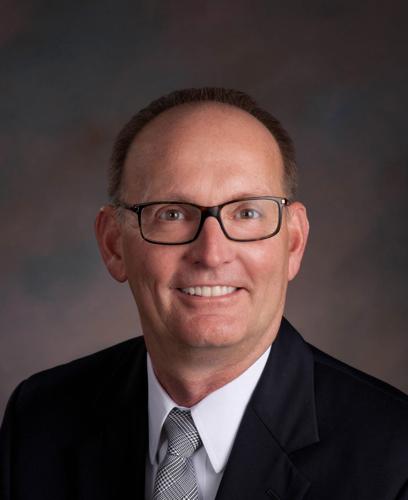