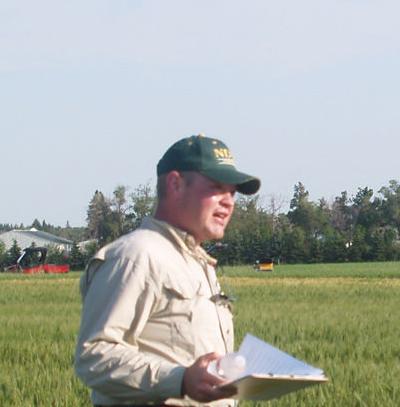 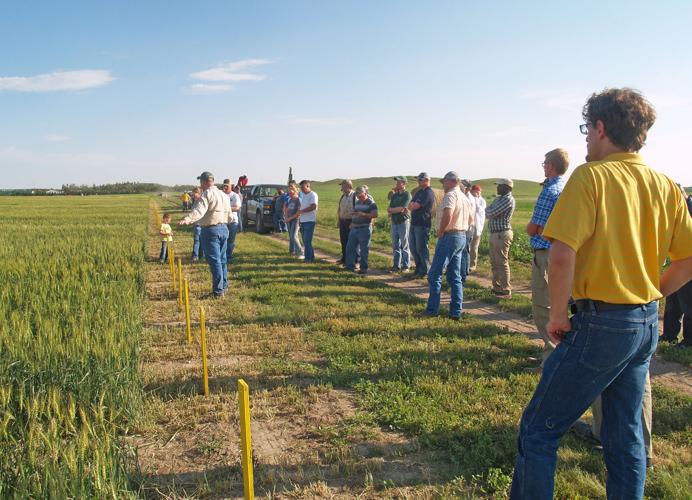 HETTINGER, N.D. – Golden spring wheat heads sparkle like crystals in the mid-day sun at NDSU’s Hettinger Research Extension Center field days in 2018, with many varieties growing next to each other for comparisons – some tall, some short and bushy, and some ‘getting ready for prime time.’

These varieties at the HREC nursery are the result of NDSU’s Hard Spring Wheat program, led by the hard-working NDSU HSW breeder Andrew Green. He is also a NDSU Department of Plant Sciences assistant professor

For the last three years, Green has been leading the spring wheat program, and he brings a wealth of knowledge honed from wheat breeders/mentors/teachers with high reputations in the wheat world.

Spring wheat was not immediately on Green’s radar until he interned during the summer of 2008 with Luther Talbert’s spring wheat breeding program at Montana State University.

“I had worked for a corn breeder as an undergrad and knew I was interested in plant breeding,” Green said. “I didn’t have any experience with wheat breeding until I worked for Luther at MSU, and Luther turned me on to wheat. I knew by the end of the summer, I wanted to work in wheat breeding.”

Unfortunately, there were no openings for master’s students in wheat breeding at MSU that year. But Talbert recommended Green speak to Dr. Griffey, soft red winter wheat breeder at Virginia Tech.

Green went on to earn a master’s degree at Virginia Tech, where wheat breeding has been a priority for the state’s producers, and later, Green earned a doctorate in agronomy-plant breeding at Kansas State University.

“Immersion in the breeding program is probably the most important part of the master’s work in plant breeding,” he said.

Quality objectives at MSU, KSU and NDSU in plant breeding may vary with different wheat breeding programs, but we still go through the same process with breeding, whether it be hard red spring wheat, soft or hard white wheat or other wheat.

At NDSU, Green utilizes molecular marker-assisted selection for disease resistance but he also does significant old-fashioned field nursery work to screen for that, as well.

“The most important way to screen and verify that the (disease) resistance is there from the field nurseries,” Green said. “You may have a positive result from a marker test, but the line you are working with may only contain a part of that target gene. It may also not be as strong of a resistant gene as you may have thought.”

That is why Green’s program contains both molecular markers and nurseries across the state.

Wheat diseases can be many and varied.

“Bacterial leaf streak is an emerging problem in North Dakota, causing yield loss every year,” he said. We don’t have a very good idea how much yield is being lost, and its geography has been pretty limited to wetter areas in the east.”

The disease can be hosted on residue and other grass species, and it can become a problem that repeats in cycles. Seed with the disease can be replanted, and there are few management tools to fight bacterial leaf streak.

However, last year there was statewide rainfall, accompanied by hailstorms, at the crucial period of early grain fill. Hail causes lesions on the leaf; bacteria can enter and with moisture, the disease can take off.

“Last year we saw it everywhere,” Green said. “Genetic resistance is the only way to combat the bacterial leaf streak problem.”

However, the most important disease statewide is FHB.

“We have been working on FHB for 30 years,” he said. “Fortunately, we have resistant varieties and fungicides we can use in tandem to fight FHB.”

While FHB was initially thought to be a problem in the east due to moisture, but some of the highest level of vomitoxin has been found in the western regions of the state.

“FHB can be a very big problem with durum and it is a constant threat to spring wheat,” he said. “All spring wheats released from NDSU must have FHB resistance.”

“Our three biggest priorities for our breeding program are stability from year to year, yield potential, genetic disease resistance and end use quality to make it marketable,” Green said.

A portion of NDSU’s spring wheat program is dedicated to developing lines with resistance to wheat stem sawfly.

“We are working on wheat stem sawfly resistance and we also have done some early week on the orange wheat blossom midge,” he added.

ND VitPro was so named because it is high in vitreous kernel (a natural translucent coloring, which is a visible sign of hardness) and high in protein, in a similar manner to the former Glut Pro.

In statewide entries, ND VitPro had the highest vitreous kernel percentage of all entries.

Dark northern spring wheat has 75 percent or more of dark, hard and vitreous kernels, which is desirable to millers.

“Vit Pro is similar to other varieties and has been well accepted by end-users for its dough strength and stability,” Green said. “Its volume, kernel color, water absorption and other quality factors are very good.”

The cultivar has good disease resistance.

“ND VitPro is a solid upper tier variety against most diseases. In fact, most of our germplasm here at NDSU is set up well against stem rust,” he said.

It isn’t a major issue yet, as UG-99 has not entered the U.S. NDSU’s spring wheat program has kept up with prevailing races of stem rust.

“ND VitPro seems to have an advantage in the western region of the state,” Green said. “We’re still looking at how to manage it best. In a year where there is FHB across the state, it will do better.”

The first round of registered seed was produced in 2017.

Registered and certified seed was produced in 2018.

“There should be a large amount of certified seed available this year, so this should be the first big year for the variety,” Green said.

With the nursery trial program, a line can be pulled out of the trial if it does not meet the requirements of the program.

“Knowing one or two lines will end up passing the finish line out of tens of thousands of lines (that are planted in trials) - you keep that in mind as you work,” he said.

Those one or two lines receive more evaluations and there is further work before the experimental lines are considered for release.

When a variety is released, that is not the most important time of that variety’s life.

“The best thing for us is after a variety is released, it catches on and is a commercial success. Then you feel like you have done something right for producers,” Green said, adding, “a lot of NDSU spring wheat varieties have done well.”

In fact, the varieties have done so well, that NDSU varieties, such as Glenn, are requested as parents in other state universities, ARS and other breeding programs.

“A variety from here has been PVP protected and one of the parts of that program is any breeder who wants to use it as a parent can use it,” he said. “I am personally very open to helping find ways to work out traits if someone wants to use our lines. Openness and ensuring germplasm is out there is important. No one can go it alone.”

Varieties are kept in nurseries such as HREC and analyzed for as long as a decade.

“In that time, we hope we have exposed it to anything it might be expose to from drought, to diseases,” Green said.

North Dakota many varied climates in different regions that NDSU must breed for.

“We put nurseries in any place we can around the state,” he said.

Because of that, Green is considering breeding varieties that will work well not all over the state, but for a certain region of the state, in the west or east, for example.

“We are recognizing that and if we can find something that fits one part of the state in particular, we can start releasing varieties for the east, west, or other regions – all cultivars have a a place where they do better.”

A lot of border regions, such as eastern Montana and northern South Dakota, are a good fit for NDSU varieties.

“In our trials in western North Dakota, Lanning, just released from Montana, is doing well, and one of its parents was North Dakota’s Glenn,” Green said. “If it does as well in quality trials, I think Lanning will do well in the western region of the state.”

“The decision was made to pre release it last year, but not enough seed was produced. We are planning to seed increase it again this year,” he said.

For sure, it will have ND in front of it for brand recognition. Anyone who uses a North Dakota variety, whether it is spring wheat or soybean or any other crop, will know it comes from North Dakota.

Hylio continues to develop its “flying tractors,” and has worked at making its crop spraying drone, called the AgroDrone, easier to operate, m…