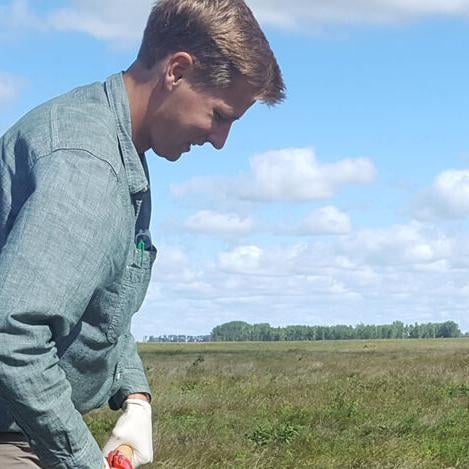 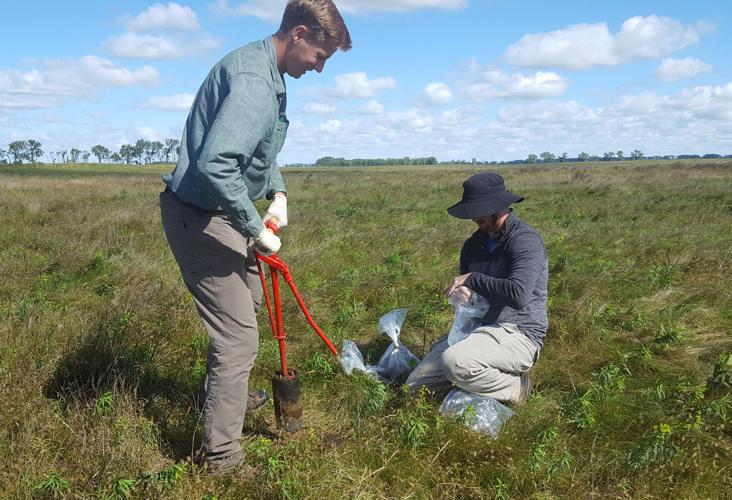 Ryan Schmid, research scientist for the Ecdysis Foundation at the Blue Dasher Farm, near Estelline, S.D., digs for a dung pat sample.

Producers, especially regenerative ranchers, become animated when they start finding dung beetles in their cow pies (dung pats). Those little dung beetles are part of a whole community of critters working in a single cow dung pat to recycle nutrients – and water – back into the soil to grow healthy grasses.

“It’s amazing to find out how many dung beetles are out there and what they do for us, and it’s exciting for me when I see how many folks are interested in learning about what is going on in their fields or pastures,” said Ryan Schmid, research scientist and entomologist at the Ecdysis Foundation at the Blue Dasher Farm, near Estelline, S.D.

Schmid recently completed a two-year study of samples taken from 40 different pastures from ranches ranging from Bismarck to southeastern North Dakota to Brookings, S.D. Earlier, he studied dung pats in southeastern U.S., and has evaluated dung pats on both regenerative ranches and conventional ranches.

Samples showed dung beetles were among arthropods and other organisms such as earthworms, fungus, and nematodes in the dung pats.

But dung beetles shine because they open up the surface areas so the other critters can get into the dung pat.

“Dung beetles are so important because they’re the recyclers,” Schmid said. “They’re the ones that initially open up the dung pat so all the other arthropods and other insects can get in there, because dung pats are so valuable in terms of the nutrients that they contain.”

Farmers are aware dung pats have a lot of good nutrients in them – that’s why they apply manure to their fields and pastures.

But if a dung pat is laid on the ground and allowed to crust over, it makes it “really hard for all the other critters to start getting in there and tearing it apart and shredding it,” he said.

Dung pat accumulation in rangelands without the necessary arthropods in them can end up suppressing normal plant growth, and it can increase pest pressure, such as maggots or flies.

Cow pies are full of water, and dung beetles help return that water to the soil.

“A cow pie is, on average, about 80 percent water. With the drought we’ve been having and continue to have in certain pockets in the Northern Plains, that is a lot of water that should be returned to the soil,” Schmid said.

Sand Ranch, owned and operated by Brad Sand, the North Dakota Leopold Conservation winner for 2021-22, was one of the ranches that Schmid took samples at last fall.

“It was exciting to see I have lots of dung beetles at my ranch,” Sand said.

At Sand Ranch, Schmid sampled 45 cow pies, collecting the dung pat and down about two inches of soil underneath the pat. Schmid used a golf course cup cutter, a tool that is used to cut holes in the green on the golf course, and drilled down through the dung pat with the tool for 10 centimeters.

“With the 10 centimeters, we got the top couple inches of soil, as well,” he said, allowing him see what biological activity, including insects, were active in the topsoil.

“It was a lot of fun. When I was out at Sand Ranch for a tour, Brad and ranchers were right there with me diving into a cow pie and looking at it. They really care about this,” he said.

Schmid’s study sampled 600 cow pies and found 235,000 arthropods in them, including dung beetles. Arthropods are invertebrates with an exoskeleton.

“That’s about 392 arthropods per cow pie, and that is only from 10 centimeters of the cow pie,” Schmid said.

“It is amazing. You think insects are just a bunch of flies that grow up and pester our cattle, but actually the majority of insects out there (on the ranch) are beneficials. That’s why all these ranchers are curious about dung beetles,” he said. “Ranchers want those beneficials in their cow pies, because they reduce their pest populations.”

Sand believes that not using pour-ons on his cattle have helped increase the dung beetle populations in his cow pies. Pour-ons for lice and other parasites can kill beneficials that eat flies, as well as harmful pests.

Schmid found that pour-ons can “transfer from the body of the cow into the dung pat and kill the dung beetles and other beneficial insects,” he said.

There are ways to use pour-ons or insecticides that won’t affect beneficials as much.

“Often it comes down to timing. If rancher use a pour-on a few months before letting their cows go to pasture, the effects won’t linger,” he said. “There are products on the market where the effects will linger for a longer time. All these insecticides have different effects, whether they outright kill dung beetles, just slow them down, or make them less mobile.”

Ranchers often send cattle in in the wintertime to a feedlot where the cattle will receive pour-ons for lice and other parasites.

“If you could pour early in the year to take care of those lice when they’re in the feedlots, and then leave that stuff alone before you put cattle out on pasture, that seems to be working for a lot of the producers we have worked with,” he said.

When Schmid researched arthropod communities in dung pats from ranches in the southeastern part of the U.S., he found only a tiny number of arthropods were actual pests.

“Of the 20,000 arthropods that we looked at from the dung community that we found out there, only about a half a percent of them were pests. The rest were beneficial insects. That is not many pests,” he said.

There are actually three different kinds of dung beetles. The “dwellers” dwell within the dung pat and consume the pat while they’re inside of it.

“If you flip a cow pie over and you see a bunch of granules, which look a little like crumbs on top of the soil – that’s caused by a dweller dung beetle,” Schmid said. “Those are the most common ones here in these temperate regions of the Northern Plains.”

Next are the “tunnel” dung beetles, which go into the dung pat and tunnel underneath, and then come back up and start pulling dung down into the soil.

“The tunnel dung beetles are the ones that can start to make dung disappear quickly, along with their friends, the ‘roller’ dung beetles, which are the third kind,” Schmid said. “They come to a dung pat, make a ball, and roll it away and kind of bury it into a shallow depression in the ground. So rollers actually incorporate dung into the ground, too.”

Interestingly, some roller dung beetles follow the stars at night and use that to guide them.

“Not all dung beetles follow the stars, but some will do that to figure out which direction they want to go to roll their ball to,” he said. “If you sit on the ground long enough watching an insect, you can pick up on some interesting behavior.”

On the regenerative ranches, Schmid has found a lot of flowering plants, and new species of grasses popping up from the seed bank hundreds of years ago.

“Cattle don’t just like to eat grass. They will eat flowering plants, as well,” Schmid said.

This is one way to increase the pollinator habitat on ranches.

“We are losing habitat for pollinators and this type of regenerative ranching not only brings dung beetles, but pollinators, too.”

Ranchers were pleased to hear the results of dung beetles – including taking part in an economical study.

“They were really excited, and part of it was we did an assessment of profitability of young dung beetles,” he said. “It is one thing to say dung beetles are controlling your pests, but does that actually get to dollars in a rancher’s pocket?”

The 40 pastures are owned by 37 participants. Of those, 28 ranchers participated in the survey to go through their books on parasite usage and ranch management. That is how interested ranchers were in finding out the results.

“It showed some interesting results. We looked at parasites out there and how ranch management was affecting parasite loads. And then I found some economic differences for how they’re managing the parasite loads. For instance, we didn’t find a difference between the two parasites we were looking at between a more conventional, continuously grazed pasture system versus a more regenerative rotational grazing system,” he said.

Both types of ranches were “really low in parasites,” so both types of operations were doing something to keep parasites in check.

“We’re treating a cow to pour-ons twice as many times per year in a conventional grazing ranch – two times per year versus 1.3 times for our more regenerative ones,” Schmid said. “And that led close to a five-fold lower expenditure for our regenerative ranches.”

The regenerative rotational ranches were spending about 60 cents per cow to get that parasite control versus $3.32 per cow on a conventional ranch.

While that was not a huge sampling size of ranches, it did show a difference.

“In total, for pour-ons for parasites and for all treatments for various diseases and illnesses cattle have, our regenerative guys are spending about $5.72 cents per head versus a more conventional continuously-grazed system that are spending about $18 per head,” he said.

Over the lifetime of a ranch, a rancher can save on parasite control and treatment for illnesses if he manages more of a rotational grazing regenerative ranch.

“We are talking tens of thousands of dollars over the lifetime of your ranching career,” he said.

Schmid plans to write up his finding and let all the participants – and the public – know the findings.

“We want all of our research to be in open-sourced public journals so anybody can access it, and then the participants – we always share back the data we collected from their pasture,” Schmid said.

Schmid is also excited about the Ecdysis Foundation’s 1000 Farms Initiative. By 2023, they plan to perform full-farm inventories on 1,000 farms assessing the status of key agronomic, ecological, and economic factors to demonstrate what regenerative agriculture can do.

“We put out a little public release flyer to ask for potential participants in that 1000 Farms project and we got more than 1,000 people signed up,” he said.

For more on Schmid’s work and the Ecdysis Foundation’s entomologists, see htttps://www.ecdysis.bio/.

Ryan Schmid, research scientist for the Ecdysis Foundation at the Blue Dasher Farm, near Estelline, S.D., digs for a dung pat sample.