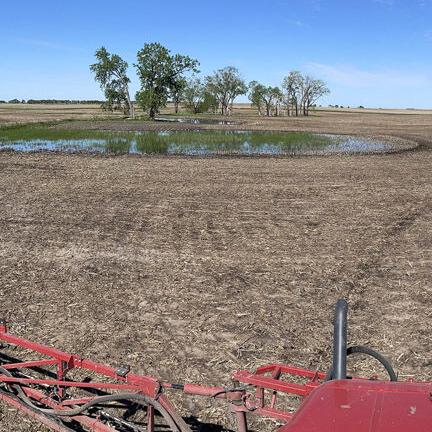 Drew Courtney sprays his soybean fields, avoiding some small depressions filled with water from the rain. 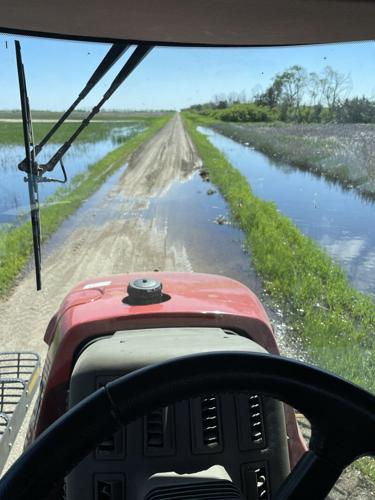 Drew Courtney moved two miles to the next field during planting and had to cross water in two spots.

OAKES, N.D. – After a significant rainstorm over Memorial Day weekend brought three inches of rain to the southeastern part of the state, it has been challenging for Drew Courtney to finish seeding his soybean acres.

“We should be done seeding soybeans by now. We have planted them in the past as late as June 10 and have had good luck with them, but we just need to get them in the ground,” Drew said the first week of June.

He has been working a lot of extra hours to get caught up because there have been rain delays.

“I worked until 1 a.m. (Saturday morning, May 28) trying to get the land roller caught up behind the soybeans before the rain,” he said.

The land roller evens out the field, knocks the corns stalks down, and if there are any rocks, it pushes them down into the soil.

“When we harvest in the fall, we cut the soybeans 1-2 inches from the ground in order to get all the low pods. We use the land roller so the combine heads can slide across smooth ground,” he said.

The Courtneys started seeding soybeans with 1.4 maturity and then put in a lot of 1.1 maturities. Now, they are seeding 0.9 maturities.

“This year, we were going to push it a little more and put in some 1.6s, but we got so delayed due to the rain and cold temperatures that we decided not to,” he said.

Due to the fact there is so much prevent plant in the state, the seed companies are working to have shorter maturing beans on hand as farmers still try to get their crops in.

Bret and Kyle finished seeding corn on May 22 and switched over to soybeans.

After the rain over Memorial Day weekend, they were shut down for four days.

Pockets within fields and sides of fields are still filled with rainwater.

“It is not a pretty sight out here right now. We have rain on top of rain,” Drew said on June 3.

While the sun was out and the weather was warming up into the 60s, Drew drove the sprayer two miles to the next field and had to cross water in two spots. Since April, the area has received 12 inches of rain.

“That is after 60 inches of snow this winter and 12 inches of rain last October,” he said.

On June 3, Drew was operating the sprayer in the field.

“I am trying to get caught up with spraying pre-emergent herbicide on our soybean ground,” he said.

Drew sprays after the soybeans are planted and rolled.

“Some of these fields, if they are too soft, I have been spraying before I roll due to the fact the sprayer leaves ruts. The roller will level out the ruts,” he said. “It is not an ideal spring, which will lead to a more time-consuming harvest with fewer acres planted than normal.”

Unfortunately, some of the soybeans Drew planted before the recent storms are now under water.

“We had just planted it, and the seeds are now submerged under water. It will be all drowned out, and if the water recedes, further into the summer it will require more weed control,” he said.

Drain tile helps with water control, but not all their fields have drain tile.

Drew said some people in his area are finished planting corn and soybeans and some people just started recently. It all depends on how much rain a field received and the soil conditions.

“Some people can’t physically drive into their fields or gain access to the fields because of damaged roads,” he said.

The last time the Courtneys had it this wet was in 2020, when they only got half their farm planted. It’s looking like it may be that way this year.

“We are going to be looking at prevent plant acres for sure. We’ll probably be done seeding soybeans on Tuesday (June 7),” Drew said.

He said their farm is located in the Prairie Pothole Region, and there are small depressions within the fields that can cause water to pool, making it more difficult for fields to dry.

“In the 1990s, we planted sunflowers, which drew out moisture, but we had to stop because the blackbirds got so bad,” he said. “We usually go for whatever the market demand is, and right now, that is corn and soybeans.”

The wheat that is coming up in some fields looks “really good from the road,” Drew said. “I need to get that sprayed soon to get ahead of the emerging weeds.”

Drew also said he was invited to a roundtable discussion with some area leaders, including Rep. Kelly Armstrong, and he went to advocate for agriculture. He talked about biofuels, property rights, prevent plant, and other topics of concern to area farmers and townspeople.

“I thanked Rep. Armstrong for holding the meeting and making the trip to Oakes to discuss issues related to rural North Dakotans and issues facing the state and nation. I also commended Rep. Armstrong for signing U.S. Sen. Hoven’s letter to Secretary Tom Vilsack about crop insurance guarantees for producers planting after the plant date,” Drew said.

On the home front, Bret, who works with the Courtneys on the farm, is having his 60th birthday on the upcoming weekend.

“There is going to be a celebration for him,” Drew said. “We’ll be shutting down early Saturday to celebrate with him and his family and friends.”

There will be a party set up in the Guelph school.

“The school still holds life, serving as a community center,” he said.

Drew said the school year is over and Avery is excited about starting softball.

“All the girls are waiting for the Oakes pool to open, too,” he said. “The two youngest girls can’t get enough tractor rides and have already racked up quite a few hours sharing the buddy seat.”

Lindsey is home from her job as a special education teacher and is planting flowers around the home farmstead.

“Instead of a full-tilled garden this year, she decided to plant some tomatoes and peppers in old water tanks. I even drain tiled the tanks. If we continue to get these big rains, the excess water will be able to be drained from the tank easily with a spigot I placed on the bottom,” he said. “That is how much I love drain tile.”

OAKES, N.D. – The corn and most of the soybeans are flourishing at the Courtney farm.

With seeding done, Miller looking for a good time to spray

New things to learn every day at Trinity Creek Ranch

RED LAKE FALLS, Minn. – There were many tasks to complete at Trinity Creek Ranch, where research and production go hand-in-hand.

WILLISTON, N.D. – The Millers, who have been busy seeding nearly every day from the last week of May through the first week of June, were able…

Drew Courtney sprays his soybean fields, avoiding some small depressions filled with water from the rain.

Drew Courtney moved two miles to the next field during planting and had to cross water in two spots.