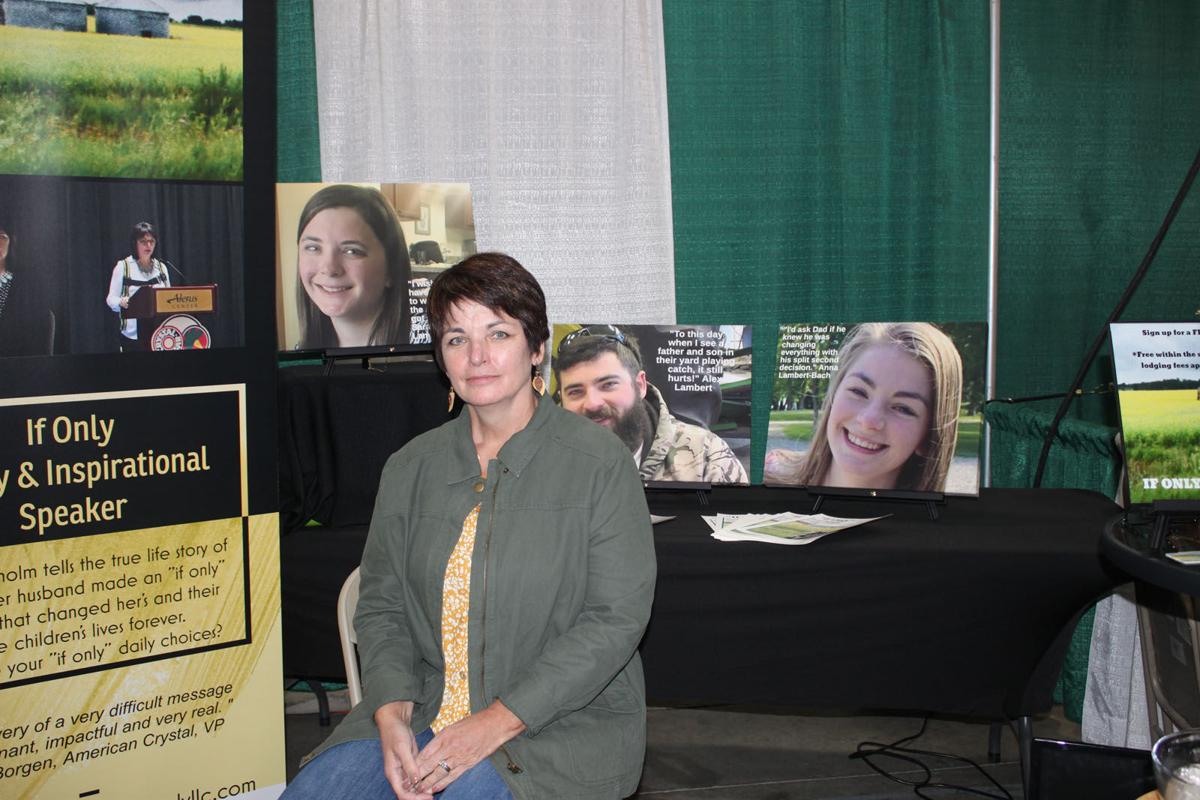 About the cover: Dawn Chisholm, Hawley, Minn., shares photos of and comments from her grown children, Sara, Alex William, and Anna, in hopes of preventing grain bin accidents. Photo by Andrea Johnson. 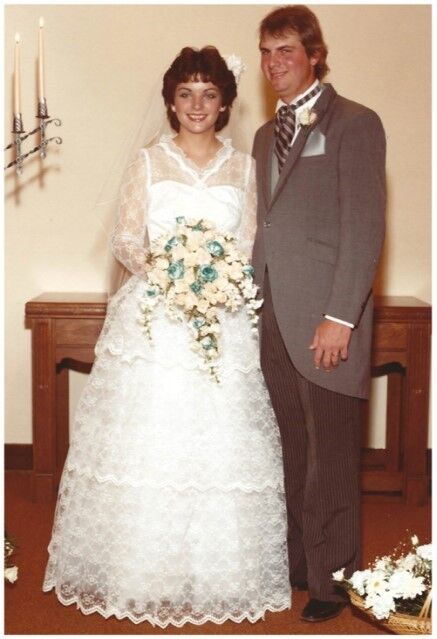 Bill and Dawn (Lambert) Chisholm on their wedding day. 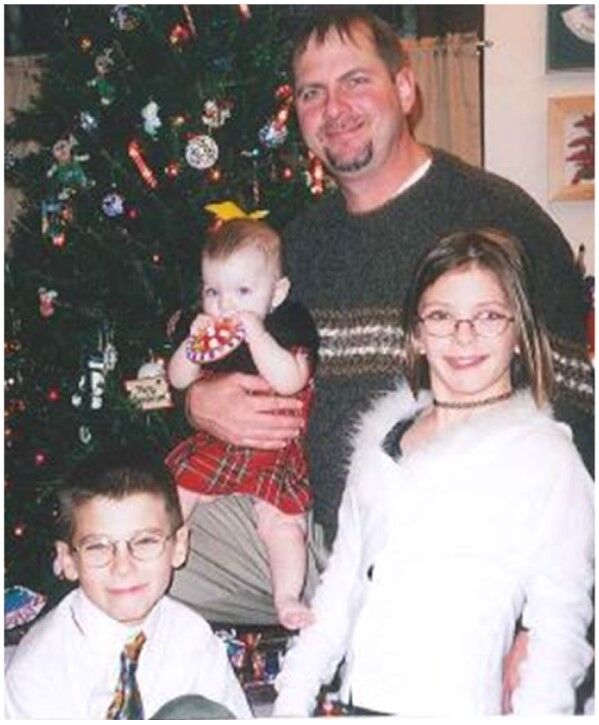 A photo of Bill Lambert and his three children, Sara, 10; Alex William, 8; and Anna, 11 months, less than two months before Bill died. 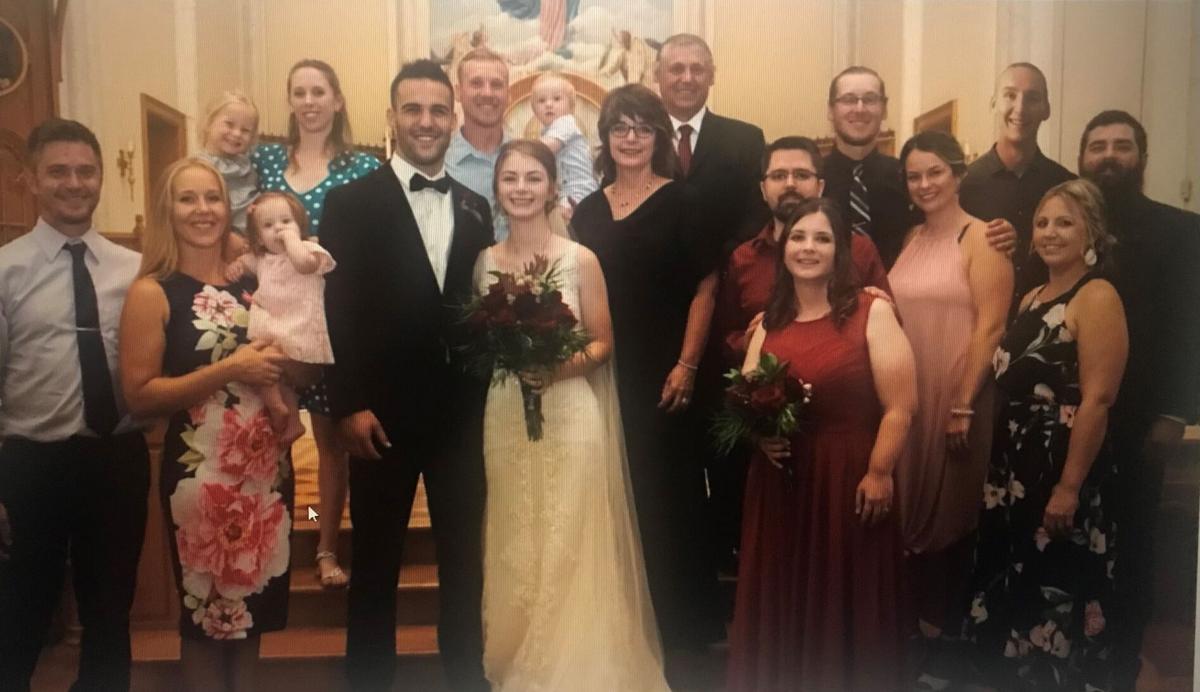 The Chisholms and Lamberts gathered for Anna’s wedding.

HAWLEY, Minn. – Take a couple minutes to get to know Dawn (Lambert) Chisholm and it won’t take long to realize how sweet and caring a person she is.

Life can be cruel to even the kindest of hearts, and that became quite apparent when Dawn lost her husband of 17 years in a grain bin accident nearly 20 years ago.

Unable to help her husband, Bill Lambert, Dawn heard a voice tell her the day after the accident to share her story to save others…

Feb. 7, 2002 – “It started like every other winter morning – family routine of getting up and readying for the day,” says Dawn when she speaks to groups about Bill’s accident.

Their children, Sara, 10; Alex William, 8; and Anna, 11 months; all woke up and talked with their daddy before Bill left for his job at a local grain elevator. At 40, he was a strong 6-foot, 2-inch, 240-pound family man who told funny one-liners.

That day, Bill and his supervisor were filling train cars with No. 2 Yellow.

“The corn stopped coming out of the bin,” Dawn said. “After they confirmed that the corn had crusted to the sides, due to wet conditions, Bill decided to enter the bin without a spotter; without a harness and lead; without checking the air quality; and without locking out and/or tagging out the unguarded running auger.”

Bill walked in on the concrete and saw the crusted corn on the side of the bin.

The accident happened in seconds, maybe a split-second.

He jabbed the crusted corn with a shovel, and the corn crashed down. His feet were knocked out from under him, and his foot jammed into the running auger, pulling him down into a seated position. With every breath, the corn filled the void around his chest. He was crushed and suffocated while his foot remained entangled in the running auger before he died.

Fire fighters and Emergency Medical Services arrived as quickly as they could to help get Bill out, but the process still took hours to complete safely.

“Once pulled from the bin, Bill, my husband, the father to our three children, was placed on a gurney, which was then placed inside the ambulance; allowing me to see him, hold him, and kiss him one more time.”

Dawn had a decision to make, and with three small children to raise, she had to make it quickly. Bill’s death wouldn’t be in vain. She would tell their story to save other lives…

In 2017, Dawn officially spoke for the first time about the accident to the North Dakota Safety Council. Since then, she’s given her talk to over 30 companies and/or organizations and thousands of people.

Her message is simple. She asks people to stop and think so they don’t have to be filled with regret – “If only I’d taken a moment to think this through.”

Her advice to those that hear her message is to spend the money to get the right safety equipment, because you can’t take money with you. Wear protective gear so you are safe and a good example to those around you. Work with and teach others to stay safe.

When you see someone getting into a bin, gently take their arm and suggest a better way. Or better yet, have a plan that is well thought out, practiced, and followed when there is crusting in the bin, because you can’t win against a bin.

“We’re empty nesters now with the kids on their own,” she says. “We are grandparents.”

Conversing with others at her Big Iron Farm Show booth this year, Dawn said, “I feel blessed that I was able to have a second chance at marriage and to be happy again. Because of my faith, I know I’ll see Bill again. That was one of the first things I said to the kids when I had to tell them about their dad’s accident. It didn’t come from me. Someone else gave me the strength and the words to tell them.

“I really do believe they are a lot more resilient, because of what they had to go through. They are fabulous kids and have such an empathy for others,” she added.

Dawn Chisholm is available for speaking engagements and can be contacted at 701-566-3920 or at dawn@ifonlyllc.com. Her web address is ifonlyllc.com.

“I tell this story, because if I can save just one life, I’ve succeeded,” she concluded.

CHRISTINE, N.D. – Jen Skoog, who owns Family Roots Farm in the southeastern region of the state, started a farm to be able to raise locally gr…

The 2021 Northern Ag Expo, which will be held at the FargoDome on Nov. 30-Dec. 1, will feature a number of informative seminars. Topics to be …

Ag and energy are closely entwined and the energy crisis across the globe has been impacting U.S. agriculture this year.

CAVALIER, N.D. – Fifth-generation farmer and military veteran Sgt. Craig Vaughn was out removing cornstalks in one of his corn fields on Oct. …

About the cover: Dawn Chisholm, Hawley, Minn., shares photos of and comments from her grown children, Sara, Alex William, and Anna, in hopes of preventing grain bin accidents. Photo by Andrea Johnson.

Bill and Dawn (Lambert) Chisholm on their wedding day.

A photo of Bill Lambert and his three children, Sara, 10; Alex William, 8; and Anna, 11 months, less than two months before Bill died.

The Chisholms and Lamberts gathered for Anna’s wedding.