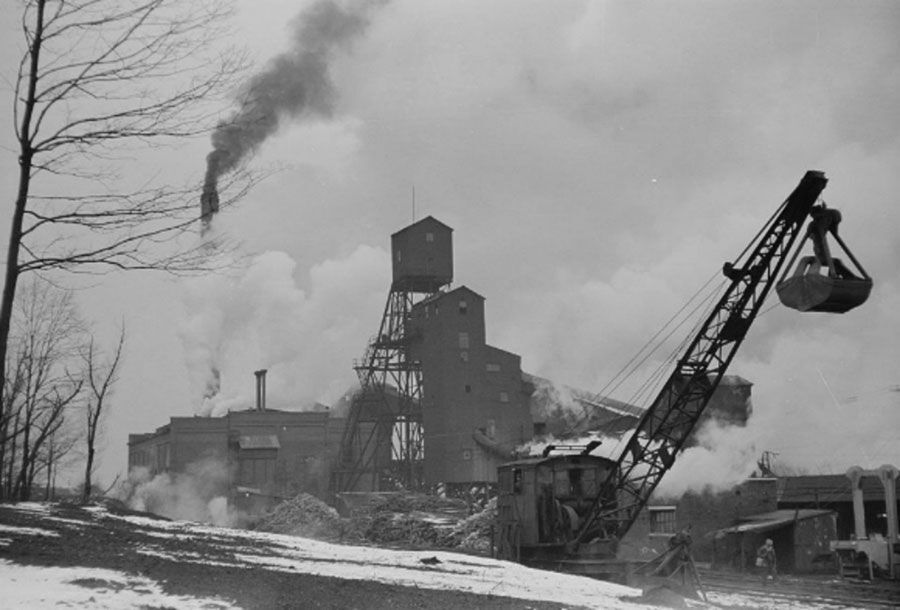 A 1939 photo by Arthur Rothstein shows Orient No. 1 near West Frankfort, Ill. One of the largest coal mines in the world at the time, it broke numerous production records. The mine opened in 1914 and closed in 1955. 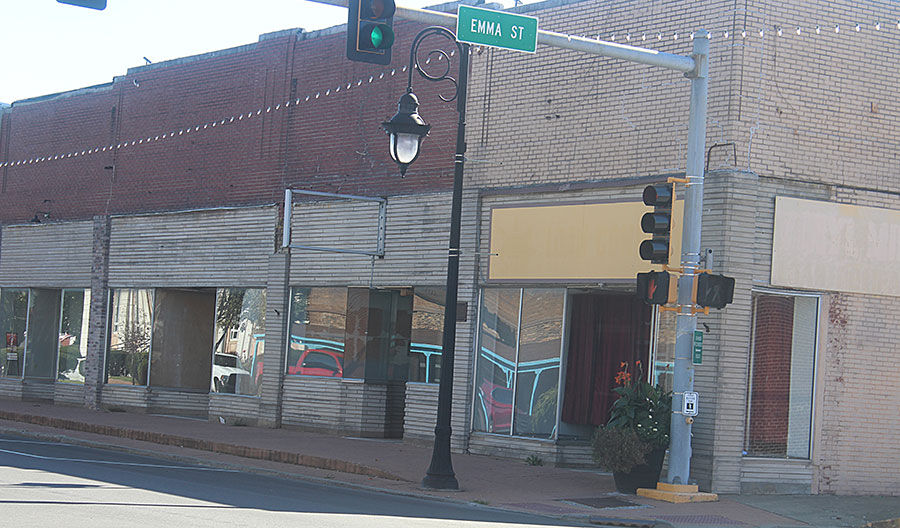 Empty storefronts line Main Street in West Frankfort. It is among many communities in southern Illinois affected by the decline of the coal industry.

WEST FRANKFORT, Ill. — The Old King Coal Festival is still held here every year, though coal is no longer king.

This community in deep southern Illinois was once awash with so-called black diamonds. The boom continued into the 1970s, but has declined steadily since. Neighborhoods just outside the city limits are still known by the numbered names of forgotten mines: No. 9, No. 11, No. 15, No. 18.

The result of the coal decline is a shifting economy and a shrinking population. West Frankfort had nearly 15,000 residents decades ago but today is home to barely 7,000 souls. Once-bustling Main Street — which at one time boasted three competing movie theaters — is now peppered with vacant, crumbling buildings.

“There were 75 mines within a 50-mile radius of West Frankfort,” said Leonard Hopkins, a native of the community who still lives here.

Now there are only a handful. Several factors are responsible for the downturn, including government regulation, labor strife and the depletion of the coal seams.

The boom-and-bust nature of the mining industry is certainly not unique to this area. The Old West was full of gold towns that in the New West are ghost towns. Many of those — such as Deadwood, S.D. — have become tourist attractions that provide a new type of income. Economic recovery in the Coal Belt is more challenging.

“The area as a whole will continue to lose working population,” said Hopkins, a retired executive with Southern Illinois Power Cooperative, which depends on coal to deliver electricity to farms, homes and businesses in the region.

The Clean Air Act, passed in 1970, may have marked the beginning of the end for the coal industry in the region. The high-sulfur coal mined here was targeted by environmental regulation, and the rules were made more and more stringent over the years by the EPA.

The green energy push today may pound more nails into the coffin. Illinois Gov. J.B. Pritzker recently signed a bill calling for the end of coal as a power source and mandating only clean energy production by 2050.

“There used to be a lot of resistance to alternative energy like solar from communities because they felt an allegiance to coal companies,” said Rick Linton, director of the Franklin County Economic Development Corp. “That’s understandable, because so much was built by coal. But that seems to be dissipating.”

Still, the region is ill-prepared to transition from coal, gas and oil to solar and wind. While many politicians claim that the new economy will provide green jobs, those jobs may not materialize in areas like southern Illinois.

“For us to get into clean energy technology we need an available, capable workforce,” Linton said. “We have a lot of unemployed people, but a lot of companies are looking for somebody with a technical background or education. We also don’t have the population base to draw from. That puts us in a weak position when it comes to attracting companies.”

The region does have good infrastructure, including 18,900- acre Rend Lake, the second-largest reservoir in Illinois. Interstate highways crisscross the region. Commercial airports in Carbondale and Marion serve as commuter hubs. The Mississippi, Ohio and Wabash rivers border southern Illinois. The nearby Shawnee National Forest — the only national forest in Illinois — provides various recreational opportunities.

“We’re really blessed with water and transportation,” Linton said. “But we’re not going to attract retail into the area because we don’t have a population base to support consumer spending.”

Meanwhile, the region grapples with the loss of jobs and lack of economic growth. The closing of coal mines also affects ancillary businesses, such as machine shops and other service industries.

Illinois Basin Enterprises, which installed and serviced conveyor belts in mines across the region, was forced to shut down a few years ago.

“We got up to about a dozen employees,” said Randy Manning, owner of the business, which was based in nearby Benton, the Franklin County seat. “Many of the mines were running three shifts.”

The industry began suffering in the late 1980s when the price of coal fell dramatically.

“The coal market dropped out,” Manning said. “Union mines were asking the workers to take some cuts. They didn’t want to do that. Some of the coal mines had to shut down. Imagine all the taxes that were lost.”

In some ways, the coal industry is a victim of its own success. Longwall mining — a method in which machines chew large swaths of coal underground— replaced room-and-pillar mining, in which pillars of coal were left to help support the top. That meant fewer workers and more efficient production, shortening the lives of mines.

“When I started, coal didn’t produce like they do now,” Manning said. “Mainline belts were 42 to 48 inches. Now many are 84 inches wide. Longwall mines still employed quite a few people, but they produced so much coal that the life of the mine would shorten.”

Hopkins believes those pushing for the elimination of fossil fuels may be sorry in the near future.

“The country as a whole will be hurting for electricity in 10 or 15 years,” he said. “It’s becoming clear that the sun doesn’t always shine and the wind doesn’t always blow. It’s tough to compete with coal.”

After visiting his father in the hospital Nov. 5, Alan Ainger felt hopeful. His father, David, seemed stronger, and there was a chance he coul…

BUTLER, Ill. — When Jon Klingenberg died suddenly in October, part of the legacy he left behind was 42 grass-fed cattle and a reputation for s…

A 1939 photo by Arthur Rothstein shows Orient No. 1 near West Frankfort, Ill. One of the largest coal mines in the world at the time, it broke numerous production records. The mine opened in 1914 and closed in 1955.

Empty storefronts line Main Street in West Frankfort. It is among many communities in southern Illinois affected by the decline of the coal industry. 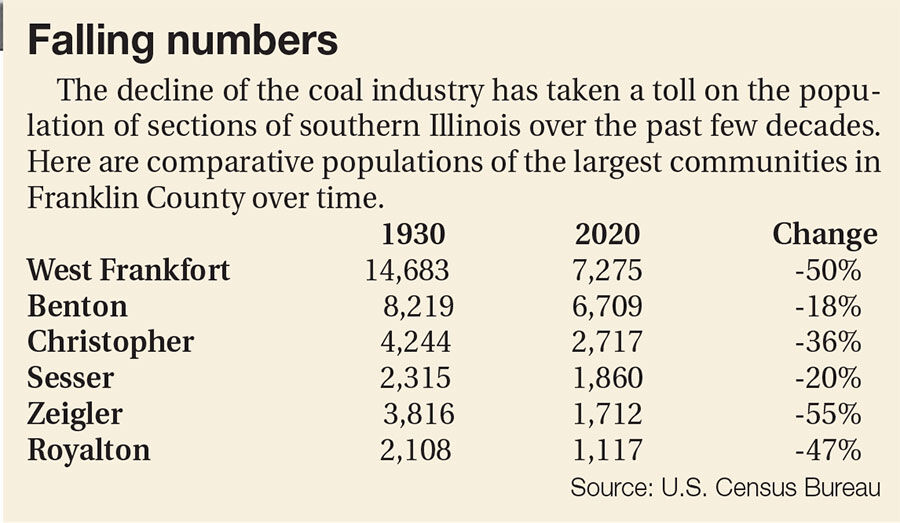