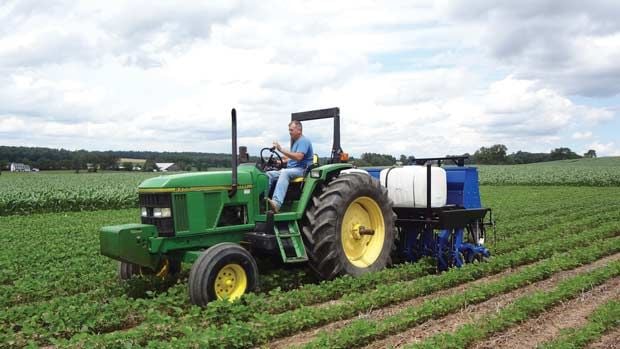 InterSeeder is a multipurpose machine that simultaneously plants three rows of cover crops while spraying post-emergent herbicide and nitrogen fertilizer in single passes between four or six rows of knee-high corn. 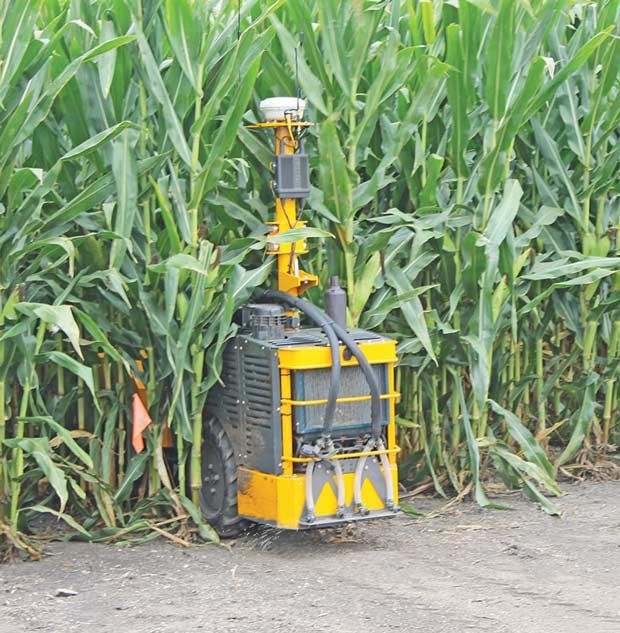 The Rowbot was initially designed for nitrogen applications between 30-inch corn rows, and is being adapted to plant cover crops.

InterSeeder is a multipurpose machine that simultaneously plants three rows of cover crops while spraying post-emergent herbicide and nitrogen fertilizer in single passes between four or six rows of knee-high corn.

The Rowbot was initially designed for nitrogen applications between 30-inch corn rows, and is being adapted to plant cover crops.

As cover crops become more popular, more machinery options to plant and manage them are becoming available. Now, manufacturers and researchers are bringing their products to market. From interseeders to highboys or even robots, there is new innovative cover-crop seeding equipment available.

Manufacturers such as Hagie Mfg., Salford Equipment and Dawn Equipment are plunging into the cover-crop seeding business in addition to startup companies.

Researchers at Penn State developed the cover crop InterSeeder and applicator, a semi-mounted machine that can seed cover crops into standing corn, sidedress nitrogen and apply herbicides in one pass.

The proprietary all-in-one unit, which converts to a no-till grain drill, is the culmination of four years of field tests conducted during on-farm trials by Penn State in collaboration with the USDA, Cornell University and the University of Vermont.

“InterSeeder is the only machine on the market enabling farmers to plant winter cover crops during June among growing stands of corn while spraying fertilizer and weed-killing herbicides in one operation,” says Chris Houser, cofounder of InterSeeder Technologies. “Farmers in regions where post-harvest planting seasons often are too short now can produce cover crops that save on planting costs, improve yields and supply fall and spring forage.”

An all-season implement, InterSeeder operates with a 90-horsepower tractor for planting wheat, cereal rye and soybeans, and its 10-foot length allows easy hauling on roads.

Rowbot Systems, based in Minnesota, offer machines to sidedress and/or seed cover crops on standing corn acres, according to Kent Cavender-Bares, CEO and co-founder of the company.

The Rowbot machines have diesel power, a hydraulic four-wheel-drive system and are GPS guided, although a sensor-based system may be in place this year. The 20- to 22-inch-wide, 7-foot-long machines have a 40-gallon aluminum tank for sidedressing UAN and four nozzles on the rear, along with a small seed hopper for cover-crop seed.

The new 45 cu. ft. Orbit-Air can be placed lengthwise on a vertical tillage tool so it can slide under folding wings. And, with its independent left and right discharge, tubing can be directed to each wing without unnecessary loops.

“Customers can mount the unit on their vertical tillage tool and run tubing directly to each wing, eliminating bothersome bends and loops,” says Doug Snorek, sales and marketing manager.

“We know that operators are applying a variety of seeds and grains in cover crop applications,” Snorek adds. “That’s why the unit comes with our granular chemical and small seed black metering wheels suitable for alfalfa, rye, clover, radish, turnip, canola and other similar type seeds.”

The Iowa Department of Agriculture says farmers continue to expand usage of no-till or strip-till to limit runoff, improve water quality and reduce production costs. The department, in conjunction with Iowa Learning Farms and Iowa State University Extension, put together information to help farmers. A fact-sheet has information on planter settings, fertilizer considerations, weed control and other considerations to help farmers successfully use no-till and strip-till in their operation.