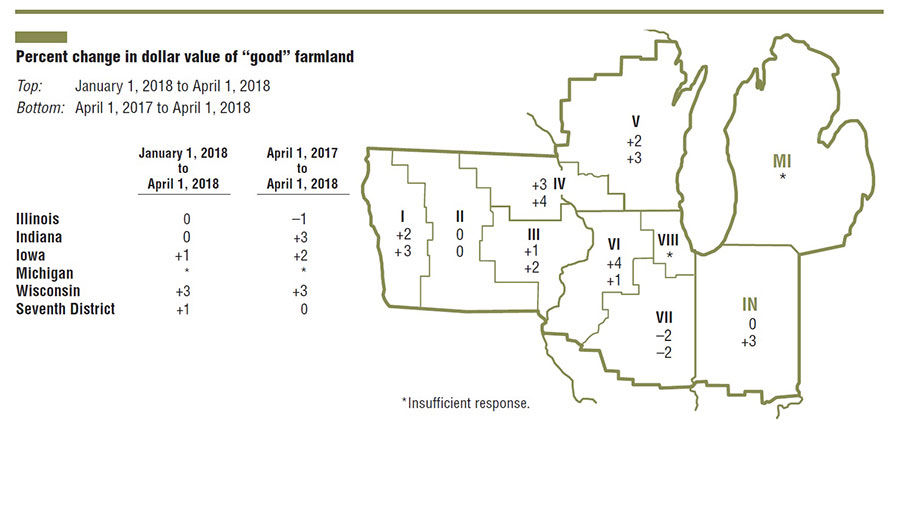 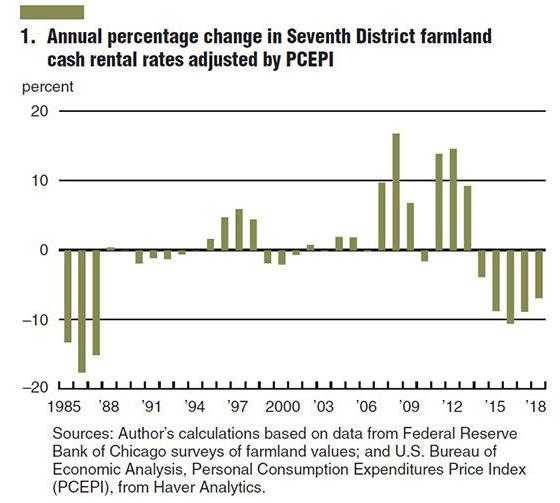 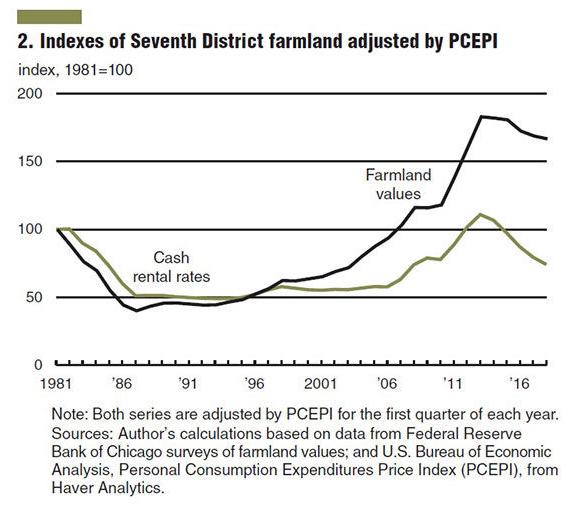 Editor’s note: The following was written by David B. Oppedahl, senior business economist at the Federal Reserve Bank of Chicago, for the May 2018 AgLetter.

Agricultural land values for the Seventh Federal Reserve District showed signs of stabilizing in the first quarter of 2018, as farmland values were unchanged from a year ago.

On average, “good” farmland values in the first quarter of 2018 rose 1 percent from the fourth quarter of 2017, according to the survey responses of 181 district agricultural bankers.

This quarterly increase in district agricultural land values marked the fifth quarter in a row without a decline.

Farmland markets saw supply rising a bit, but demand and sales slipping. There was an increase in the amount of agricultural land for sale during the most recent winter and early spring relative to a year ago, as 27 percent of the responding bankers reported more farmland was up for sale in their areas and 23 percent reported less.

With cash rentals making up 80 percent of district agricultural land operated by someone other than the owner, changes in their terms are a key indicator of agricultural conditions. Cash rental rates for farmland in the district decreased 5 percent for 2018 relative to 2017 — the smallest decline in four years. For 2018, average annual cash rents to lease farmland were down 5 percent in Illinois, 3 percent in Indiana, 6 percent in Iowa, 3 percent in Michigan and 7 percent in Wisconsin.

Even so, an Iowa banker said, “Land rental rates are status quo to slightly lower, but demand limits a reduction in rent per acre.”

There seemed to be enough farmers willing to take on more acres to plant, such that cash rents did not fall as much as they would have otherwise. Meanwhile, other farmers quietly ended their rental contracts, even defaulting on payments to landowners in some cases.

After five years of falling cash rents, the district’s index of real cash rental rates was cut by a third, the largest such decline since the 1980s.

Hence, the implication is that relatively stronger demand to own farmland than to lease it has kept farmland values from falling as much as the earnings potential of farmland (represented by cash rental rates).

Since these price decreases would have resulted in greater declines in crop revenues than observed in cash rents over the past five years (all else being equal), farm operations needed productivity gains through higher yields and cost-cutting measures in order to preserve working capital and maximize cash flows.

According to an Illinois banker, “We are seeing working capital dropping significantly, but for the most part our borrowers are financially stable and able to cope with the low grain prices.”