"This is a day a lot like the day of the accident,” Jason Johnson said Oct. 29 while we set up hydrogen sulfide gas monitors at the east end of his cattle confinement shed. “Sun-shiney, warm, a little breeze.”

Too much so, as it turns out.

Johnson, of Andover, Iowa, started pumping out a full pit but was soon on the phone commiserating with an Illinois friend who’d just lost nine 1,200-pound cattle — found dead Oct. 28 in the pen over a manure pit that was stirred the night before.

The Illinois cattleman — who spoke with me for this article — was among the 80-some people who attended a manure handling safety meeting at Johnson’s farm on Oct. 26, 2016, four days after that “sun-shiney day” when Jason and Sherril Johnson lost 23 head of cattle killed by hydrogen sulfide gas (H2S) during pit pumping.

That fall, the deadly gas killed dozens of cattle in several tri-state area pumping incidents. A young Wisconsin farmer who was agitating an open lagoon was killed two months earlier.

Now, the Johnsons’ Illinois friend described what happened at his Whiteside County operation. They’d stirred the pit Saturday afternoon and evening to ready for pumping on Sunday. The next morning, nine head were dead along the perimeter of the pen at a corner opposite the pump. The remaining 161 head in the pen were unaffected.

There were similarities to Johnsons’ loss two years prior.

In both situations, cattle were in the pen while the pit was stirred below. The pump’s top nozzle was near or above the manure surface — a factor that contributes to high H2S concentrations released into the air. Agitation shoots slurry and gases toward pit walls and corners where gas moves up the sidewall, affecting animals along the sides of the pen more-so than those in the center.

“The top nozzle was 6 or 8 inches above the manure surface and we were getting more foam at this building during stirring (than the building they had just pumped),” the Illinois farmer said, “but we didn’t move cattle out before we pumped; we didn’t have a place for them.”

Looking ahead, he said, they’ll likely put fewer cattle in pens so they’ll have options to move them out before pumping.

It was the first loss for this Illinois cattle feeder, but not his first brush with H2S. At Johnson’s 2016 safety meeting, he described a close call: his employee had climbed the ladder on a semi tank to check the manure level; while climbing down, he lost consciousness and fell to the ground, but came to several minutes later.

“That was lucky,” he explained.

It prompted safety measures that included wearing personal H2S monitors and mounting cameras on their load stand so employees can see tanker manure levels without having to climb the tank when a float gauge gets stuck.

At Johnson’s Andover barn this past week, pumping started at the same pit where cattle died in 2016. The pit was full, but the pen was empty. Johnson began stirring with both nozzles, but he cut surface agitation, and then stirring altogether, because a foam layer was growing on the manure surface and the H2S monitors were “going nuts” with constant beeping, flashing and buzzing alarms.

Our monitors were showing near-continuous concentrations above 90 ppm and “Over Limit!” warnings — indicating levels exceeded the 100-ppm upper range and the Immediately Dangerous to Life and Health concentration.

Manure was soupy enough from recent rain, Johnson decided, they could forgo stirring. He added a manure defoaming agent to control the foam, which helped. Still, several hours and loads later, we saw concentrations intermittently peaking over 80 ppm at the tractor and tank loading areas.

Lonnie (Chicky) Eickert, one of Johnson’s employees, remembered the sound of cattle dropping on the slats on Oct. 22, 2016.

But it’s an earlier tragedy that motivates Sherril, Jason and their crew the most in advocating for safety.

Sherril’s husband (Jason’s father) Dwight and their employee Justin Faur died in 2005 after H2S exposure. Dwight had entered an emptied pit to retrieve a chain, and Faur tried to rescue his boss.

Sherril’s dad, Allen Schroeder, had come onto the scene as Faur was entering the pit.

“I saw his eyes roll back, and he made a three-quarter turn when he fell. I got down and looked in the hole and I saw Dwight lying there in the northeast corner of the pit.”

It was Schroeder who kept Sherril and his granddaughter out of the pit when they came running to help before first responders were on the scene.

Their experiences in 2005 and 2016 have stoked a mission to make others aware of H2S dangers and to get H2S monitors in the hands and clipped to the collars of producers, employees, truckers and commercial pumpers in the area.

Sherril’s informal networking includes getting people in touch with monitor suppliers, showing neighbors how to activate and use their monitors, learning how to test them to make sure they’re working right, and getting them replaced ahead of their end-of-service life and an upcoming pumping season.

“We want to get the word out, to make people aware and convince them that the monitors are so important to use,” she said.

Stephanie Leonard is an occupational safety manager at The University of Iowa. Email her at stephanie-leonard@uiowa.edu.

The only way to know when conditions are dangerous is to use gas monitors specific for H2S. 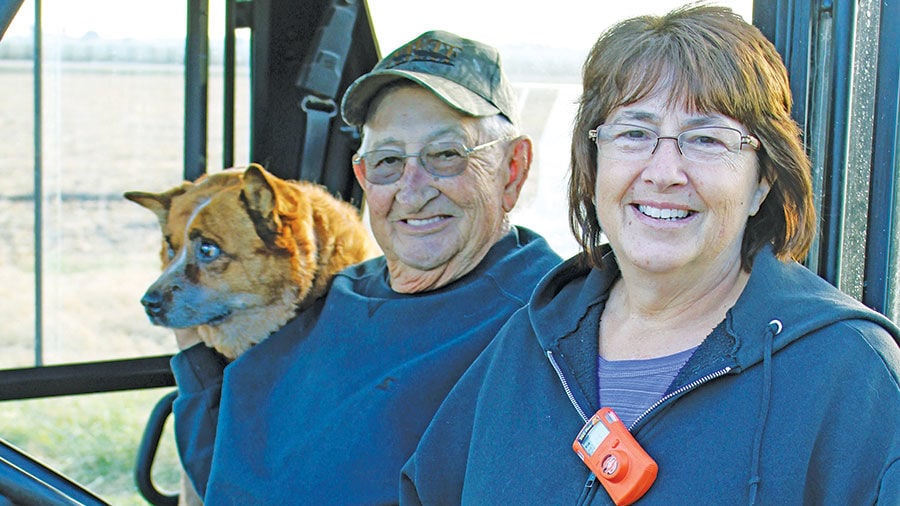 Sherril Johnson and her father Allen Schroeder of Andover, Iowa, with Missy. Sherril wears a SGC-Plus-H2S gas monitor when working around manure pumping and transfer.