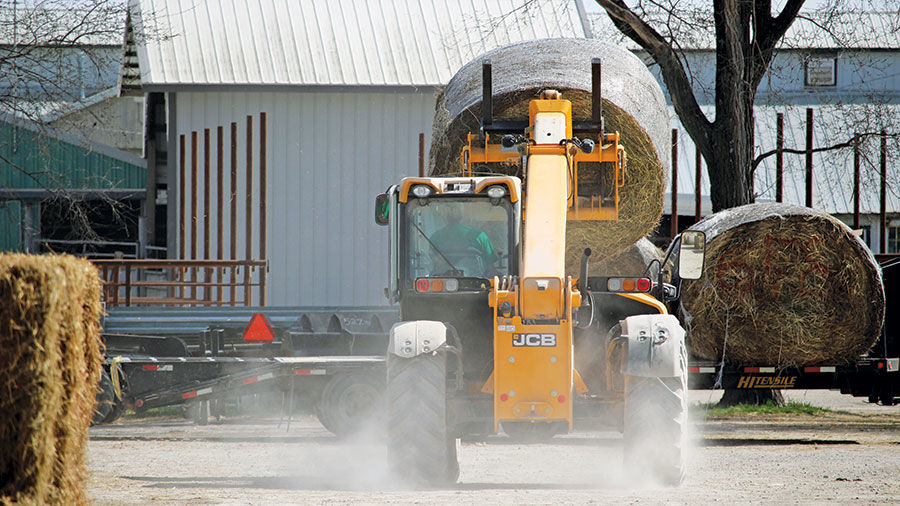 bale 1 n. : 1. a large bundle of raw or finished material tightly bound with twine or wire and often wrapped.

Large bales: They’re massive, unyielding and inert, and indispensable in the livestock industry.

Mishaps with these three-quarter-ton articles we make and transport can result in a not-so-familiar definition of “bale”: harm, misfortune, anguish.

Bale fires are one misfortune, but they don’t compare with loss of life.

Consider some of the tragedies in recent years:

A farmer in Iowa died when a large bale he had just stacked fell on him.

One of several round bales lost from a semitrailer struck an oncoming pickup, causing a crash that killed both its passengers in Minnesota.

A South Dakota man was unloading large bales from his semitrailer when “one got loose and crushed him.”

A 10-year-old in Iowa died after a round bale that was being moved with a skid loader fell off the equipment and rolled over him.

In two different incidents in Iowa, truck drivers died when they were struck by large bales that fell off their trailers. Both victims were standing on the ground on the opposite side of the trailer from where bales were being unloaded. Unloading from one side caused bales to shift and topple off the other side, unbeknownst to the unloading operators.

A man was injured in a multi-vehicle accident in Illinois when a rear-end collision of two hay-hauling trucks caused a round bale to fall off and strike his vehicle.

In two separate incidents in Iowa, farmers died in tractor rollovers that resulted when their tractors drove up over bales that fell off their front loaders.

An Iowa farmer moving bales was struck and killed by a raised bale that rolled backwards off the front loader into the tractor operator’s area.

An Iowa man died after he was struck by a raised bale that fell apart while he cut the wrapping.

An Iowa farmer’s tractor overturned and pinned him when he used it to try to stop a round bale from rolling downhill; the tractor ran up on onto the bale and overturned.

A Wisconsin man died after he was trapped under a large bale of corn stalks.

The scenarios that can turn into a worst-case outcomes, when gravity or unanticipated movement put a bale into motion, include these:

You can reduce the risks of injury and property damage with safe practices:

Let’s prevent situations where a bale is the source of harm and anguish.

Steph Leonard is an industrial hygienist at the University of Iowa. Contact her at stephanie-leonard@uiowa.edu.