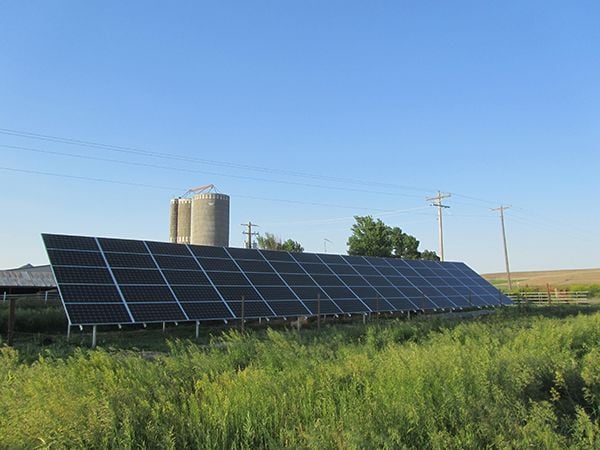 A 25-Kilowatt solar panel array for an irrigation system on Greisen Farms in Platte Center, Neb. The panels were installed by Renewable Solar LLC out of Monroe, Neb. 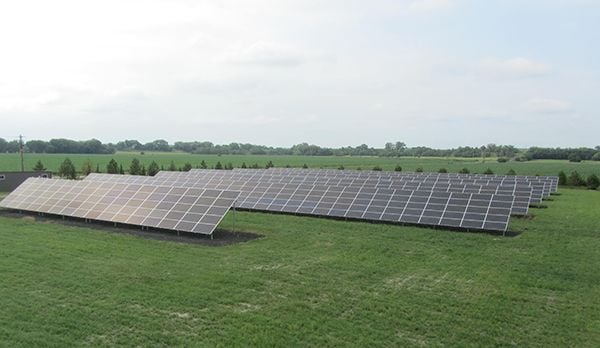 Nebraska leads the nation in total irrigated acres, but trails in using solar energy to power the pumps.

“The reason Nebraska is dead last when it comes to individual farm systems is because Nebraskans are not informed properly — or not informed at all,” said Anthony Kush, owner of Renewable Solar LLC in Monroe, Neb.

Kush is frustrated, because he knows that one of the areas in agriculture that benefits the most from solar energy is irrigation. When the sun is shining, corn needs water, he said. If the pumps used for the transport of the water are equipped with solar cells, producers can get the water when they need it and save money in the process.

The solar energy absorbed by the cells is converted into electrical energy via a generator, which then feeds an electric motor driving the pump. Most of the traditional pump systems depend on the local power grid.

As of 2008, over half of the irrigation in the state was being powered by electricity. Under contracts with utility companies, irrigation scheduling is arranged around electric peak-load times of electricity usage (late afternoons), thereby reducing the rates and making electricity the most cost-effective energy source.

A passionate advocate of solar energy in agribusiness, Kush stated that navigating the bureaucratic maze of permits, zoning regulations, state electrical codes and insurance qualifications surrounding solar power is a daunting task and can take a month or more.

“I spend more time filling out paperwork for a new system than I do installing that system,” he said.

His company sells, installs and services solar panel systems for residential, commercial and agriculture uses around the state.

Providing electrical power to more than 30,000 center pivot irrigation systems across Nebraska, the Nebraska Public Power District launched a project in 2013 to test the feasibility of using solar photovoltaic (PV) energy to power them.

“I installed the first-grid tied solar array for a center pivot in 2013 at Lindsay and numerous more since then,” said Michael Shonka of Solar Heat and Electric, Inc., in Omaha, Neb. “There should be an initiative to install solar for irrigation [in Nebraska], but there is none.”

Not too much has been said publically about the project since its inception.

“I remember this project when it was announced but have not heard too much in the time since,” said Jesse Starita, PR and engagement coordinator for the Nebraska Water Center in Lincoln, Neb.

What is really needed is a statewide solar tax credit — like in most other states — that incentivizes private investment in solar infrastructure, he said. While they have been becoming more receptive, Public Power also needs to accelerate their acceptance of solar energy, Shonka stated.

“Some infrastructure will need to be upgraded,” he said. “But, these are strategic investments — not stranded.”

In Nebraska, unfortunately, there are no direct initiatives for solar-powered pivot irrigation systems, said Dr. David Holtzclaw, president of Transduction Technologies in Omaha.

“You can buy solar-powered equipment for irrigation and either get a low-cost loan through the Nebraska Energy Office, or a REAP grant or loan through the federal government,” he said. “Likewise, USDA has a renewable energy grant program. The solar cost (but not irrigation cost) would qualify for the ITC tax credit.”

Right now there are low-interest loans, 2 percent and no out-of-pocket expense; a 30 percent federal tax credit; 100 percent deprecation; no sales tax on agriculture equipment improvements; and no property Tax on 25-kilowatt and below systems, Kush explains.

“The utilities have not been comfortable on utilizing solar for pivots yet,” said Graham P. Christensen, owner of GCResolve in Omaha. “I hope we can get a clearer platform on this, but there has been no movement yet, even though farmers have clearly expressed interest in this area.”

“We’ve met with both Southern and Dawson [Public Power] about solar-powered pivot irrigation, but they currently don’t have a rate mechanism to make a system feasible,” he said.

Power companies offer many different terms/conditions, Kush said. These include a Purchase Power Agreement. If you obtained solar panels through a lease or a PPA, you will receive a solar bill each month from your solar company.

g Net billing — Like net metering, producers are able to offset retail electricity purchases, the primary difference is the differing rates used to value the excess energy fed into the grid and energy received from the grid

g Buy All, Sell All — The Buy-All, Sell-All Program is available to owners of eligible, qualified solar facilities

g Community Solar — Community Solar refers to local solar facilities shared by multiple community subscribers who receive credit on their electricity bills for their share of the power produced.

“My father is in Southern’s territory and has received a USDA to put 25kW on a pivot meter,” Berggren said. “We’ve met with them and it looks promising that we’ll figure something out.”

Others are not as optimistic.

“Incentives? In Nebraska, we are lucky they let us tie in at all,” said Robert Byrnes, owner of Nebraska Renewable Energy Systems in Lyons. “The fact that state law will not allow meter aggregation is specifically detrimental to use of solar for irrigation and they know it.”

Irrigation systems only use power three to four months out of the year, he stated. With aggregation, this power could be used to offset electrical power on other meters the farmers have. By disallowing aggregation power, companies force the farmer to accept very low value for power produced at irrigation pumps when there is no use there, making a drastic negative impact on the solar economics, he said.

“They do this despite the fact they could really benefit from solar power being produced during peak power (irrigation) time in the summer,” Byrnes said. “My mother would say it is cutting off your nose to spite your face.”

The economics of solar and large scale irrigation can be challenging partially due to how the solar electricity is valued when generated and the electricity flows to the grid, stated John Hays, UNL Extension educator on energy. Spring, fall and winter production would flow to the grid and generally receive lower value than electricity produced and used by the irrigation system in the summer.

“One of the challenges — meter aggregation, or generation at one location with net metering offsetting a different meter location — is sometimes called virtual net metering,” he said. “Such metering arrangements can exist if the utility decides to allow them, yet many will decide not to unless the law forces them. There is at least one example of virtual net metering in Nebraska where a utility decided to allow it for a particular Community Solar system.”

Solar could provide a cheaper source of power and is available during those hot, summer days when producers have to go on the spot market and buy “MegaWatts for MegaBucks”, said Shonka.

Interesting to note, Shonka said, the Fremont Community Solar project was over-subscribed before it was built. How did they do that and no other utility in the region has accomplished the same success?

“They listened to their customers — they had an outreach program with community speaking engagements, surveys and even trade shows,” he said. “The most successful offering in the state has yet to be copied. Not sure why.”

Nebraska farmers need to communicate with their local state senator to help streamline the process of using renewable energy on our farms, Kush said.

“Misinformation and the lack of political will are what is keeping Nebraska farmers from benefitting from cost-saving technology,” he said.

Of approximately 55 million acres under irrigation nationally, about 15 percent are located in Nebraska. Between the 2002 and 2007 agricultural census years, Nebraska’s irrigated base expanded by 934,000 acres. As of 2007, Nebraska had 8.56 million irrigated acres. About three out of eight cropland acres in Nebraska are under irrigation.

Resilience is the ability to recover from stress, and in the case of crops, healthy soil helps guard against water stress.

An eye on corn rootworm

Corn rootworm infestations have picked up across the Midwest and Plains states in recent years, and those pesky little larvae can destroy a si…

Knowing when to manage soybean gall midge is a critical first step to addressing the new pest, although no single tactic has been found to achieve complete control.

A 25-Kilowatt solar panel array for an irrigation system on Greisen Farms in Platte Center, Neb. The panels were installed by Renewable Solar LLC out of Monroe, Neb.