As a boy, you could find Patrick Freeze joyfully immersed in the red, clay soils in Hamilton, Texas. One of seven children of hardworking, blue-collar parents, he learned the art of the outdoors early on working on their small farm.

“My granddad was a retired fisherman and shrimper. I was originally from the coast of Texas,” he began. “But we gave up the sea life for the soil. We had a large garden and geese, ducks, chickens, turkeys and hogs. We spent the summer months mostly picking Johnson grass out of the neighbor’s maize field. It was good work.”

One with the soil from the start, years later the unity with the land that was developed in his roots became Freeze’s life’s pursuit. “I started my education by studying art and design, but the earth science classes really caught my attention. Working with the soil, it feels so good. It’s inherent in me, ingrained in my hard wiring.”

The topic of soil health is truly what is most near and dear to Freeze’s heart. “If I want to calm down, I read a nice soils textbook. It’s like sitting with an old friend.”

Today, Freeze is a soil health scientist at Ward Laboratories based out of Kearney, Nebraska. The Washington State University Ph.D. (fall ‘22) is a Fulbright Scholar with USDA NIFA (United States Department of Agriculture National Institute of Food and Agriculture).

Freeze’s dissertation covers the subject of remediating arsenic and lead in soil and water. “Applying pesticides in orchards in Washington State has caused contaminated soils in many areas. Looking at ways to reduce lead and arsenic in the soils helps growers and also improves land sold for development.”

Freeze also had the chance to study soil contaminants firsthand in Thailand while earning his Ph.D. Through his Fulbright U.S. Student Program grant, Freeze spent 10 months studying the devastating issues that have arisen from cadmium contamination in Thailand. He said they were mining zinc for fertilizers and, since zinc and cadmium sit so closely to each other on the periodic table, the zinc waste was naturally enriched in cadmium. The area he was studying also has monsoons causing flooding every year. The rice fields are flooded as well, which carries the pollutants from the waste to the rice crops. The goal overall was to improve the quality of the grain as a safe food source, as well as an export product.

“They eat rice four or five times a day, and these crops were contaminated causing a large number of people to experience renal failure and cancers,” he explained.

Freeze noted the technical process of removing cadmium from the soil beneath the shallow water involves using complex and targeted amendments that bind or extract the contaminants.

His global experiences do not stop there. Freeze also traveled abroad to Ghana as an undergraduate at the University of Nevada in Reno. He went with the Environmental Law Alliance Worldwide to help Indigenous African tribes impacted by gold mining.

“That was a gut-wrenching experience,” he said. “The tribal lands were ruined for years.”

If worldwide experience was not enough, Freeze also pursued outer space soil studies. After researching sustainable sources of nitrogen with a scholarship from the National Science Foundation, he was able to obtain another research opportunity with NASA (National Aeronautics and Space Administration). He worked with NASA scientists who were studying methane sources on Mars.

However, Freeze’s heart was most fueled by helping people on the frontlines of agriculture. That is why he found himself in a career at a small soil lab in extremely rural central Washington. It was during this time that Ryan Dennhardt – human resource business manager for Ward Labs, discovered the up-and-coming soil talent on LinkedIn.

“I was not really looking for a job,” Freeze admitted. “But they were looking for a soil scientist and I agreed to speak with them. I did not realize it was going to be such a comprehensive call. Dr. Ray Ward, Nick Ward and Ryan were all on the call, and then later on told me they wanted to fly me out to meet everyone. I came out here, and I was immediately impressed. It was kind of like ‘Willie Wonka’s Chocolate Factory’ for someone into soil science.”

Freeze said it was meeting Ray that solidified his decision. “He is such a different scientist. He is extremely accurate and precise in his methodologies but is also very passionate. He would tear up talking about wanting to help farmers. I had not experienced that kind of emotion since working with my travels with AmeriCorps. I knew I must take the offer and that is how I ended up here.”

Freeze has been in Nebraska since December and is especially thrilled to be working one-on-one with farmers to inspire them to be more interested in soil health.

When a farmer asks Freeze what soil health test they can do to start out, he said, “I tell them an aggregate stability test. It’s like nature creating a pearl. Soil with the best aggregates are well-structured materials that are the result of harmonious activity in the soil. I would also tell them to look at the chemistry that helps them analyze the inputs they do or do not need.”

“It’s exciting to see farmers taking the initiative on their own to learn about soil health,” he went on. “For example, I am working with a grower now who does not have a science background, but who has a passion for the science of soil, and he is very into cover crops. He wants to study the fluctuations of his system from start to finish and is outlining a written proposal of the analysis he wants.”

Freeze said Ward’s overall soil health assessment is a great tool for farmers and ranchers seeking an in-depth analysis without breaking the bank.

“Ray has really taken the time to fine-tune the soil health research and analysis that really needs to be done. Our new assessment marries the newer approaches with historically used tests and methods that are very well vetted. It's a very good bang for your buck for farmers.

“If you never want to get bored, study soils,” Freeze relayed. “Ray is testament to that! That is why he is almost 85 and still working. There is always something new to learn. It’s a crazy time to be alive, as both a farmer and soil scientist.

“We have more mouths to feed than ever before,” Freeze said in closing. “We also have depleted soils. But the good news is, it’s possible to rebuild the soil. With more mouths to feed, we need the ingenuity of the private lab to help meet that demand by working with the farmers and using soil health as a guide.” Learn more at www.wardlab.com.

“Knee high by the Fourth of July” is an old adage for corn growers that I’m sure a number of readers will recall. Here at the Post Farm, our c…

From bread to pasta, wheat is a staple ingredient in U.S. pantries. Wheat farmers are doing their best to grow their wheat crop, but many outs…

Nebraska Sandhills is 'the place' for ranch couple

"This just might be the place that your ancestors or mine stopped dead in their tracks after a long and ugly journey and unhitched the horses and said this is it - this is where we begin."

Hello everyone from our lil’ part of the Bohemian Alps. We have been blessed by some beautiful rains. It has been exciting to go the rain gaug…

High winds not always to blame for toppled trees

Merging ag and business at the Northeast Nebraska Ag Banquet

Connecting farms, businesses and families for the past seven years, the Northeast Nebraska Ag Banquet highlights the importance of agriculture in the region. 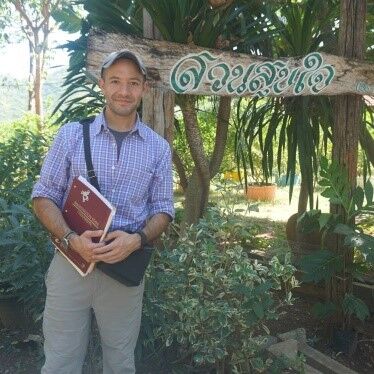 Patrick standing at the entrance of a farm in central Thailand marked with a sign that reads “Suan Sook Chai” which translates to “the place that brings happiness.” The farm is near Lopburi in central Thailand, an agriculturally rich region that grows a lot of vegetable crops and tropical fruits. They were there as part of a field study looking at some of the agricultural research projects, some focusing on cassava, maize and citrus fruit. 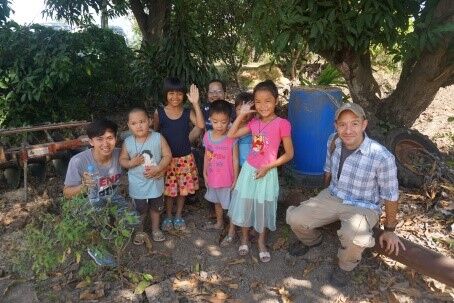 Patrick visiting children in a community in northern Thailand (Loei) affected by heavy metal pollution in their water sourced from a local mine. They were working as part of a workshop investigating human health impacts stemming from heavy metal contamination in water sourced from a mine in Loei.  The mine and its effects on the local community are very famous in Thailand, and they met many community members experiencing severe health impacts. They worked with the community members for two days collecting health and site information. 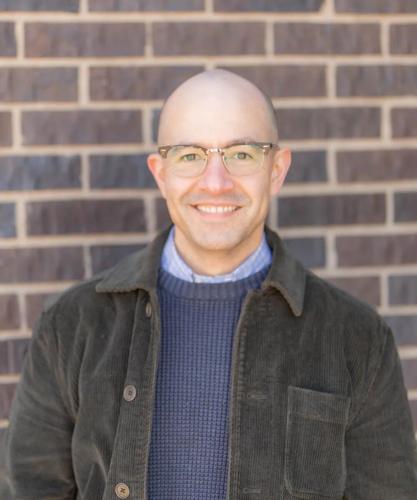 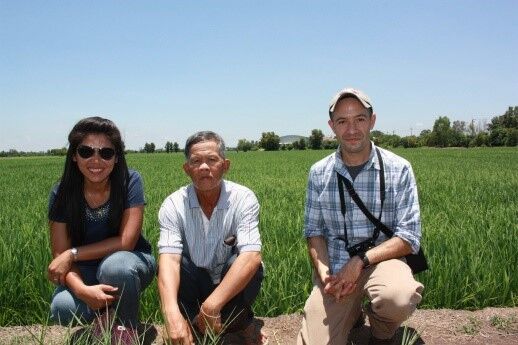 Patrick kneeling with his host faculty member Saengdao Khaokaew (left) and a rice farmer alongside an acidic rice paddy affected by acid sulfate soils. The soils in this region are heavily affected by acidic parent materials that produces a lot of acidity when it’s exposed to the atmosphere. The researchers at Kasetsart, his host institution, are working with Thai farmers to curb the negative effects on agricultural crops sourced from acidic soils. 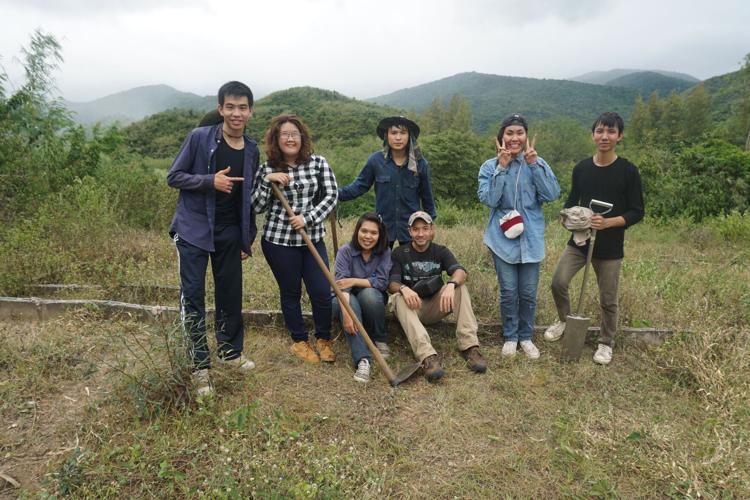 Patrick in Thailand with group.