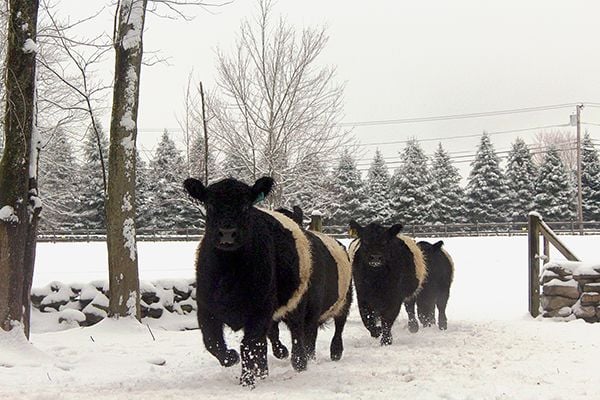 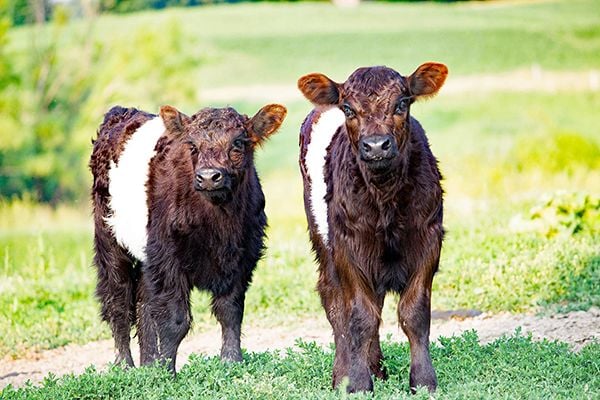 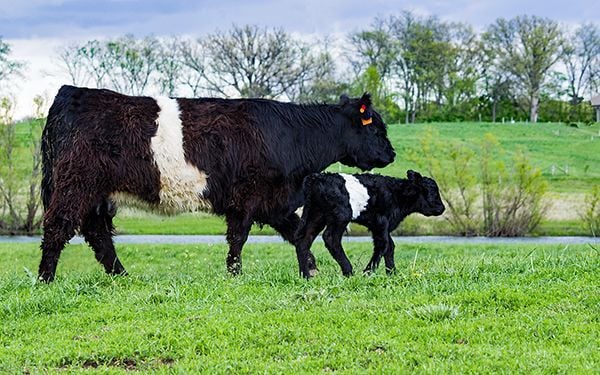 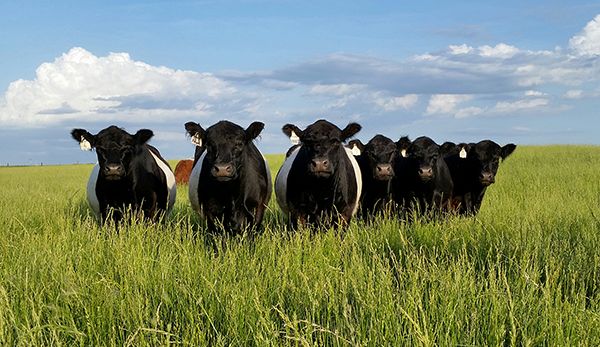 Belted Galloways lined up in field. 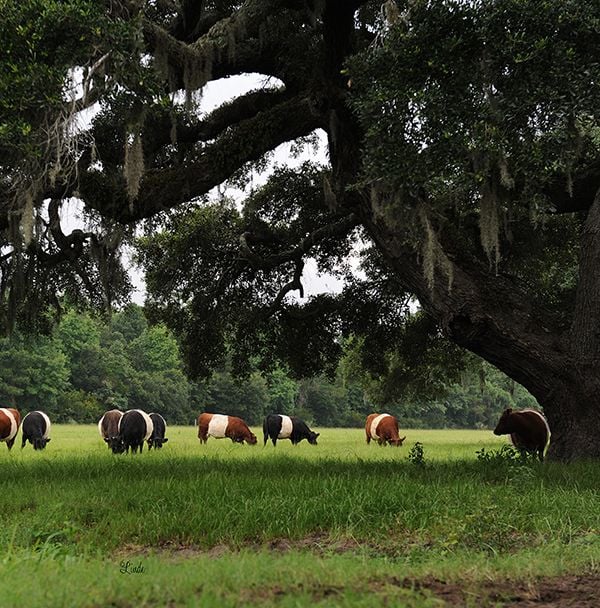 They’re the “oreo cookie” cow of the bovine world, and they are a unique breed among cattle.

Belted Galloways have the continuous white belt encircling their middles, with the rest of them being primarily black, although they can be red or dun.

The “belties,” as they are referred to, are a smaller animal that originated in the Galloway district of Scotland. References to the “sheeted” cattle can be found in literature and art as early as the 11th century, but the belties’ first recorded history is from the 15th century, in an area of Scotland known for its rugged and hilly seacoast.

Belties have a more moderate frame, as compared to the more well-known breeds, are more rugged, more feed-efficient, and more tasty, says Victor Eggleston, DVM, the executive director for the Belted Galloway Society.

The animals have hair coats four times thicker than standard beef animals, with two layers. The outer layer sheds in the summer to help the cattle adjust to the heat. In cold weather, the two coats are an advantage. Most beef animals need additional feed to maintain their body heat, but belties, because of their heavy hair coat, don’t.

“They don’t require as much fat to insulate themselves,” Eggleston said.

Belties are also very efficient feeders. Eggleston has talked to commercial feeders who also have belties, and when feeding forage, belties are 30 percent to 40 percent more efficient than the commercial animals.

Greg and Pat Hipple have two herds of cattle outside Solon, Iowa, an Angus-based commercial herd and belties. He keeps the two herds separate till the fall, when calves are weaned and the cows are brought closer to home. It’s then he notices a big difference: the belties eat about half to 60 percent of the feed that the commercial herd consumes.

Of course, the belties wean smaller calves, anywhere from 550 to 700 pounds, and when a beltie steer is ready for slaughter, it will weigh about 1,250 pounds.

Even though belties don’t put on the back fat that standard beef animals do, their meat is tender and tasty. They marble well, Eggleston said, growing and thriving on forage, finishing more efficiently than most other beef breeds. “With higher protein grasses and forages, they can exist much better than the standard animal can.”

Many Belted Galloway producers market beltie meat directly to the consumer. There’s less waste, because of less fat. Hipple notes his belties have about a 2 percent higher carcass yield than standard cattle. Belties gain on less feed, even if their rate of gain isn’t as good. Hipple’s best rate of gain for his belties has been 2.9 pounds. “The cattle are a little bit thriftier than commercial cattle,” he said. The animal’s smaller carcass also works well for today’s smaller families.

The Hipples market their meat in halves and quarters, all by word of mouth. One of their clients is a restaurant in Solon, the Salt Fork Kitchen. The chefs were initially looking for something unique when they approached the Hipples. They served belties produced by the Hipples, but once, Greg took in a black white-faced steer that was well-finished. The chefs told him, “there’s nothing wrong with that beef, but we don’t want it again.” They preferred the taste of the Belted Galloway. Patrons of the Salt Fork Kitchen who have eaten the beef and asked about it have been referred to the Hipples. “We’ve had people buying beef from us for 20 years,” Hipple said.

There are few drawbacks to belties, said Eggleston. “These animals are very, very hardy. Disease is not an issue.” One downside is that first service conception rates are lower than average. Eggleston, who raises belties, has AI’d his cows in the past, but always keeps a bull around, too. It’s difficult to identify the cows in heat. Eggleston thinks it might be because there aren’t many beltie producers. “Most beltie breeders don’t have the traditional beef background,” Eggleston said, “and tend not to cull their animals as quickly based on their productivity. The other breeds we’re familiar with cull much heavier,” he said, “and after several generations, you reduce the breeding problems.”

The national association for the breed is the Belted Galloway Society, with headquarters in New Glarus, Wis. Associations can also be found in Canada, Australia, the U.K. and Ireland, Germany, Norway, Denmark and New Zealand.

The Hipples got their start in belties like most others: because of the animals’ unique look. When they were dating, they would drive past a farm with belties, and Pat mentioned she would like some of those black and white cows. They bought one in 1993, and when their two kids came along, they showed belties. Greg, a past president of the association (2016-2017) and Pat have loved the people they have met through association meetings.

Most beltie producers have 10 cows or less, Eggleston said. “The vast majority are very small operations.”

But it’s still the unique look that attracts people.

“They’re eye-catching. That’s what puts people on them from the beginning,” Eggleston said.

Winston Churchill owned a herd of belties and was a member of the Belted Galloway Society in the U.K.

Can be found in Australia, Canada, Denmark, Germany, New Zealand, Norway, Sweden, the U.K., and Ireland