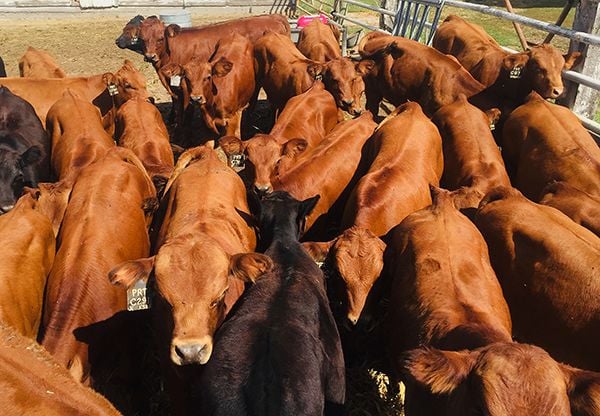 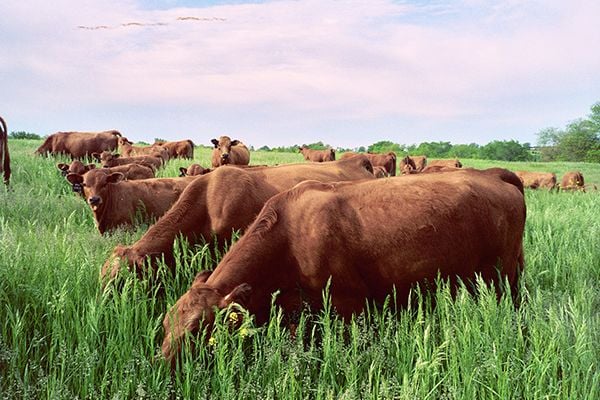 The Tarentaise breed of cattle is an important but clandestine player in the cow/calf industry. That’s because the breed, which originated in France in the 1850s, adds crossbred vigor to the business and is found in a large number of commercial herds across the U.S. Tarentaises were highly isolated when they developed in the Tarentaise Valley of the French Alpine Mountains over many centuries. Because of the steep mountains and the high altitude, the cattle developed strong muscling in the hip region, excellent feet and legs, and robust cardiovascular systems. The cattle are still raised in the Tarentaise Valley, strictly for their milk production, which is used to make Beaufort, a Gruyere-type cheese.

The Armbrust family has been farming and raising cattle in Douglas County, Neb., for more than 150 years, and Bill Armbrust, of Paradise Ridge Farm near Elkhorn, Neb., has been raising Tarentaises since the 1980s. He initially bought two Tarentaise bulls and put them on his Angus cows, with the plans to sell the heifers. But he loved them and couldn’t part with them.

“They were beautiful animals, and they far out-did my Angus cows and calves,” he remembered. “Two years later, I had seven-year-old Angus cows that couldn’t come close to producing the calves my crossbred Tarentaise-Angus cows were producing as two-year-olds.”

Armbrust said that by adding the Tarentaise cross into his herd, cows often live 10 to 12 years, with some living to be 15 or more years and producing a dozen calves in a row, compared to the six or seven years without the Tarentaise blood.

“That’s the beauty of the Tarentaise-British breed cross,” he said. “You get longevity, cross-bred vigor and more milk, so you have heavier weaning weights and many more years of calves.”

The Tarentaise breed has few disadvantages, but one might be that in about a quarter of the Tarentaise-Angus crosses, the calf has a red hide instead of a black hide, which costs the producer. However, Armbrust promotes the crossing of Tarentaise with Red Angus with no loss of premium, as part of the Red Angus’ “yellow tag” program, the Feeder Calf Certification Program for his calves.

There are a lot of Red Angus producers using Tarentaise, he notes, to make crossbred replacement heifers and steers.

The breed came late to the crossbreeding party, Armbrust said, which is another drawback. There was less early experimenting done with Tarentaises by commercial cattlemen. By the time the breed came to the U.S., Simmentals, Gelbviehs, Braunviehs and others were being used as crosses. These breeds were “established in testing programs early on,” he said. “We came late.”

Another reason Tarentaise are not widely known is that they are not conducive to youth livestock shows. The Tarentaise have two kinds of hair: a short undercoat and long guard hairs.

“You can’t fluff them up and cut muscle into them like you need to do for your kid’s show calf,” Armbrust said. The hair gives the breed the ability to survive harsh winters and hot summers, however, which makes them adaptable to nearly every climate.

Because of their strong cardiovascular system developed in their home environment of the Alps, Tarentaise do well at high altitudes. They don’t suffer from the high elevation disease of other breeds.

“We have a lot of interest in the Rocky Mountains,” Armbrust noted. “We graze up the ski slopes.”

It’s difficult to find the purebred herds of Tarentaise, Armbrust said. Commercial herds across the nation, from coast to coast, are raising Tarentaise. But there are very few registered seedstock herds, and those that exist tend to be small. Many cattle producers raise their own genetics, producing their own bulls and replacement heifers. Because the cross isn’t terminal, there’s less demand for bulls.

Semen is a popular way to access the Tarentaise genetics. The animals live longer and are productive longer, which also means cattle producers are replacing cattle less frequently and are dramatically reducing replacement costs and the frequency of calving heifers.

Armbrust has provided seed stock to producers across the country. Just recently, he’s worked with a dairy producer in Colorado who is looking into making artisan cheese with Tarentaise milk. And he’s mentoring the next generation of Midwest Tarentaise breeders.

Armbrust believes strongly in the importance of the Tarentaise breed. He knows the advantage the Tarentaise offer is a good fit for commercial producers, but not all of them.

“We live in our niche, we love our niche, and it’s a very strong niche in the cattle business,” he said. “It’s not for everyone but it’s right for the progressive and profit-oriented commercial cattle producer.”

In France today, Tarentaise graze in the French Alps ski slopes during the summer. The pastures are so far removed from towns that the herdsmen stay with them for the summer months. Tarentaise are the only European cattle hardy enough to graze this region profitably.

There are no state associations