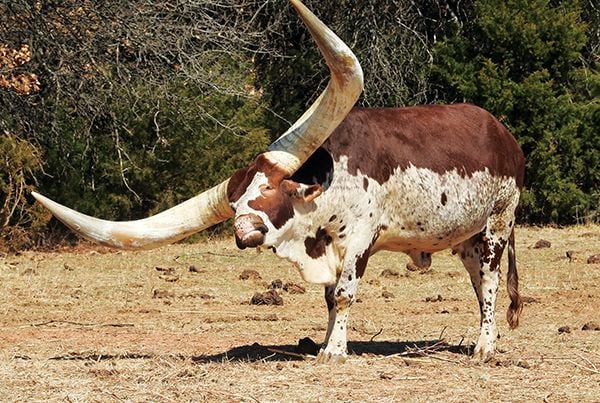 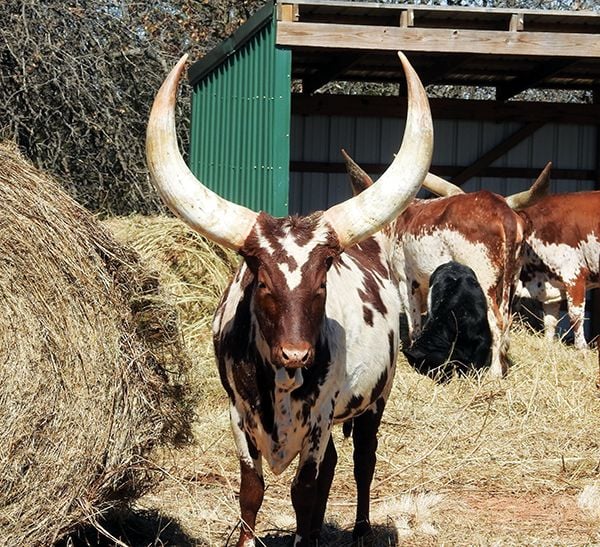 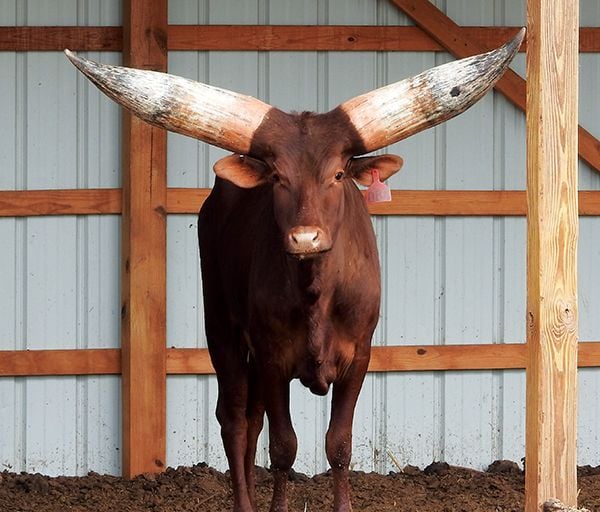 Watusi cattle make a person stop and look twice. The African breed is best known for its large horn circumference. They do not have the widest horn spreads, but their horn circumference is the largest among all breeds of cattle in the world. Referred to as “bulbous,” horns can be up to 26 inches around, although they are usually smaller.

Watusi cattle originated from the Ankole type of cattle in Africa and were imported to Germany as zoo specimens in the early 1900s. From Germany, they spread to other European zoos.

In 1960, a herd was started in New York by cross-breeding some of them with an unrelated bull.

Pat Burnett, in Wills Point, Texas, has been raising Watusi cattle for the past 20 years. He loves the animals and their characteristics. They have small calves who thrive, Burnett said.

“Those suckers are up and running quickly,” Burnett remarked.

Watusi cows do not give much milk but the milk has a high butterfat content, which helps calves grow rapidly. They have a strong herd mentality and do not like to leave their herd mates. In 20 years of raising Watusi, Burnett has had only two of them get out.

They are also very protective of their calves and the herd. They sleep in a circle, called a glum, with their backs to the inside of the glum, their horns to the outside, and their babies in the middle. A few years ago, as he checked cattle one night, Burnett noticed that the glum was tighter than usual. Later, he found out that a cougar had been sighted a few miles away, killing livestock.

“The cows knew it,” he said. “Now every time I walk out and see a tight circle, I know the cougar’s back.”

For the most part, the breed is easily handled, but there are some that aren’t.

“If you leave them in the pasture by themselves and never jack with them, they’re not going to be as docile,” he said.

When he weans the bulls, he feeds them for three or four months, by hand, and they are tame enough to walk with him to the feed trough.

Watusi also have another interesting quirk. When Burnett goes to load them in a trailer, they go in easily. He attributes that to what he calls the “cave effect” —ancestors of the animals may have gone into caves for protection, and the trailer seems like a cave to them.

Getting them out of the trailer is not as easy, however.

The Watusi hide is thicker than regular cows; Burnett has seen many broken needles when vaccinating them. The meat is lean, he said, and studies have shown it is low in cholesterol. Their hide is thick, but their fur is not. The animals don’t do well in cold weather.

Kyle Soper raises Watusi cattle on the Soper Ranch near Luther, Okla. He helps his cattle get through cold winters with a three-sided shelter, open to the south, and feeds them later in the day, so they go into the night with full bellies.

Watusi’s horns do not grow “flat,” as in long from tip to tip, but in a V (an “upswept” shape), or a U (a “lyre” shape). For some Watusi, as the curved horn shape is formed, the tips grow inward and almost touch each other. The V- and U-shaped horns are the most desirable in Watusi.

Horn circumference is important, but length is also a factor. The registry has started a program to rate horns with a formula, using the measurement of the circumference and the length of the horn from base to tip.

The animals seem to be cognizant of their horns, Soper said, able to maneuver around obstacles.

“They’re really good with knowing where their horns are,” he said. One of his cows has to turn her head sideways to the right, then to the left, to get in the corral. “If they’re going through two close trees, they know how to do it.”

He has crossed a Watusi with a Texas longhorn, which usually produces horns that don’t have the big circumference but are longer, like the longhorn. The animals are mostly “yard ornaments,” Soper said.

“People aren’t eating them,” he said. “They want something cool walking around their ranch.”

They can be expensive. Last year, a Watusi cow with exceptional horns and a desirable hide color sold for $25,000. Average price isn’t that high, though, he said, but because of the cost, “there’s not much of a market” for them. Cost depends on their horns, color and if the animal is registered.

Hides with a “Swedish” pattern — white on the bottom, brown on top — are more valuable. The Watusi cattle in Africa usually have solid red hides. In the U.S., Watusi cattle can be red, brown, black, or spotted. In Africa, they are sometimes called Ankole cattle or African longhorns.

The World Watusi Association, headquartered in Walnut Springs, Texas, is the largest Watusi breed association in the nation. Burnett is president of the WWA. The group has a twice-a-year meeting in Macon, Mo., with an auction, scholarships, and more. Members can be found across the nation. Watusi livestock shows have been held at the Colorado State Fair, the Kansas State Fair and the Tulsa State Fair, among others.

The Guinness World Records notes two Watusi who have record circumference for their horns: a bull named CT Woodie, who measured 40.7 inches, and a steer named Lurch, who measured 37.5 inches.