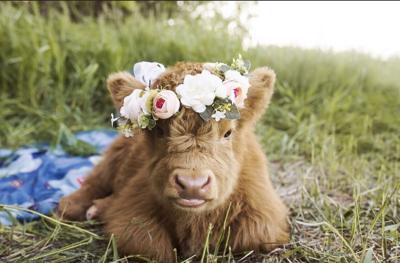 Some cute little cattle are worming their ways into hearts and homes across the country.

Rolling 7 Mini Cattle, run by the Zutavern family of Custer County in central Nebraska, breeds and raises miniature cattle, and sells them to individuals across the nation.

It began in 2015 as the dream of Print and Kate Zutavern. Print, the sixth generation on the family Angus ranch near Broken Bow, was looking for something different to supplement ranching income.

That’s when his wife Kate, who was scrolling through social media one day, came across a picture of a mini calf. She commented on how cute it was, and Print began researching them. Within a week, he and Kate were headed to California to purchase five head of minis.

At that point, they didn’t realize that the chondro gene in cattle is responsible for their dwarf-size, and that if both the bull and cow carried the chondro gene, there was a 25% chance the calf would get both genes, a deadly combo.

So they sold those five cattle and started over with chondro-positive bulls. At first, they started with the Scottish Highland breed. Then Print wanted calves with different colors and more “fluff,” so they added other breeds, like British White, Belted Galloways, and Shorthorns, with the majority as Highland crosses.

The mini Highlands are one of 26 breed categories recognized by the International Miniature Cattle Breeders Society and Registry.

The miniature bulls are bred to non-mini cows with as small a frame as possible. Full grown, the mini cows stand 36 to 42 inches at the hip and are around 500 to 800 pounds at full maturity.

The calves are sold as bottle calves or weaned, depending on what the buyer wants. They are sold as pets and companions, Kate said.

There’s a year’s waiting list for the calves, which sell for anywhere from $1,500 to $6,000, depending on the calf’s mature size, sex and color.

“I told Print I’ll give it three years,” said John Zutavern, of his son’s project, “and now we’re into year five.”

John said the cattle are easy keepers and hardy. They run them with their Angus cattle, with very little maintenance. That’s another reason the minis are a good business decision.

“It’s really no different (from the Angus),” Kate said. “We’re out feeding cows, breaking ice, doing chores. It’s a different breed but we’re not doing anything different than what we’d be doing with the Angus.”

The minis are a way for Kate, and John and Charla, his wife, to forward the legacy Print left.

Print passed away in February 2020 after living with bipolar disorder for seven years. His loss affects his wife and his family every day.

Kate keeps his memory alive through the minis and through a Facebook page she operates, the Print Zutavern Mental Health Initiatives Fund.

“The page is to honor him and bring awareness to mental health,” she said. “We just want, especially in a rural area, for people to realize how real it is and the lack of support people struggling with it have.”

There’s a stigma attached to mental illness that she’d like to see erased.

“People don’t understand, and some people flat out don’t believe it,” Kate said. “(Mental illness) is truly an illness that can take over someone’s body just like cancer or diabetes does.

“The brain is the most complex organ in the body but we still don’t accept when it’s not working.”

While the ranch has sold mini calves to people in 26 states and Canada, most are pets for people living on acreages, but they’ve also been used as therapy animals. That’s meaningful to Kate. Even her 4-year-old daughter uses them to relax.

“My daughter will go out and lay down in the barn with them and pet them and talk to them. It’s like therapy dogs, it’s just a different look,” she said.

Neighbors had their doubts when they saw the mini cattle, but not anymore.

“I think we were the laughingstock for quite a while around here,” Kate said.

She and Print called their minis their “cartoon herd.”

John says the minis are “cute factor on overload,” and says he’s even seen a customer – a couple who couldn’t have children – with the calf included in the family picture under the Christmas tree.

The minis are a way to add income to their ranch, but also a legacy for Print.

“He’s the reason I do this,” Kate said. “He and the kids keep me going. We’re doing it for them.”

More information can be found at Rolling7Minicattle.com. 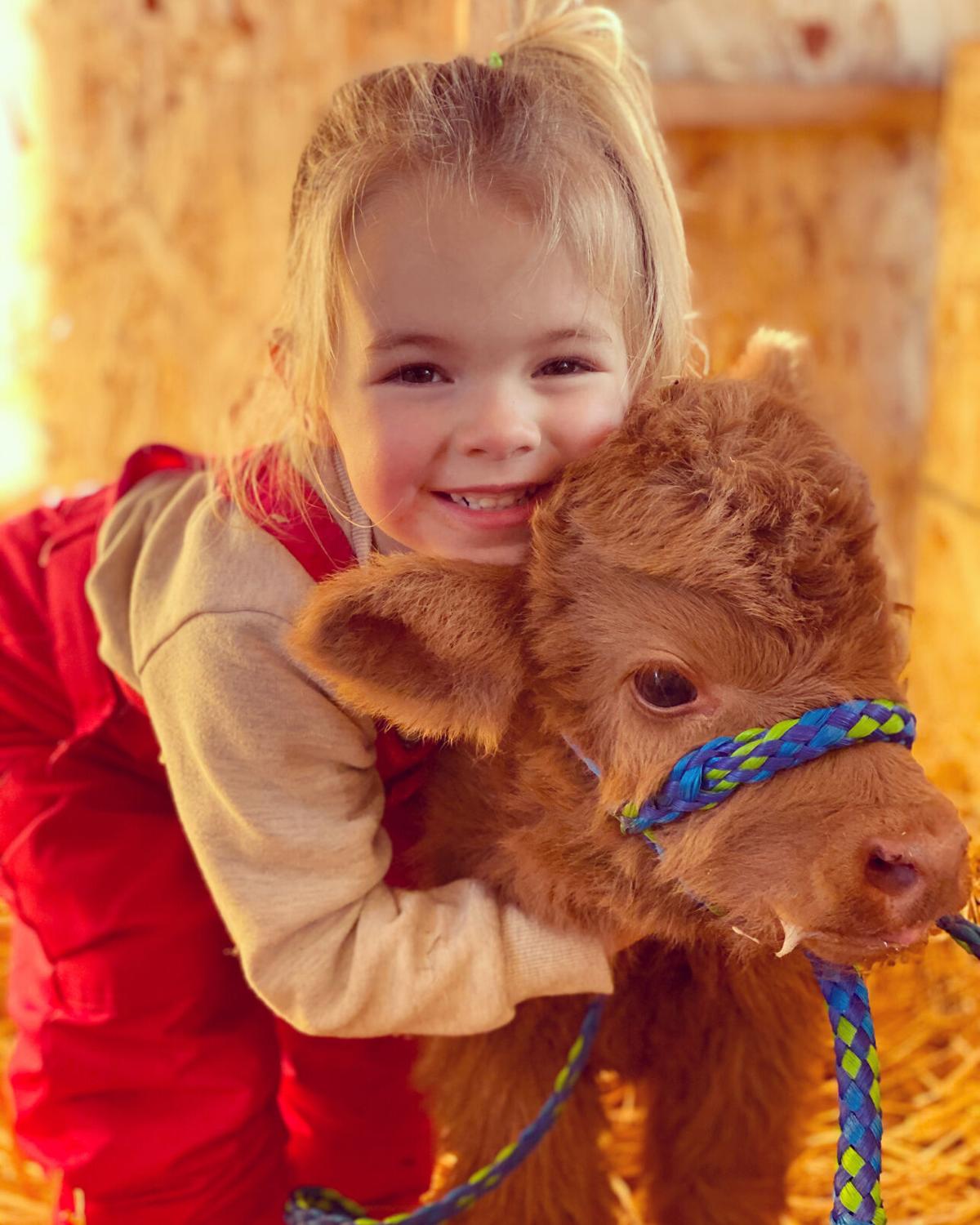 Oakley Zutavern hugs a mini-calf. The animals are sometimes used as therapy animals, much like dogs. 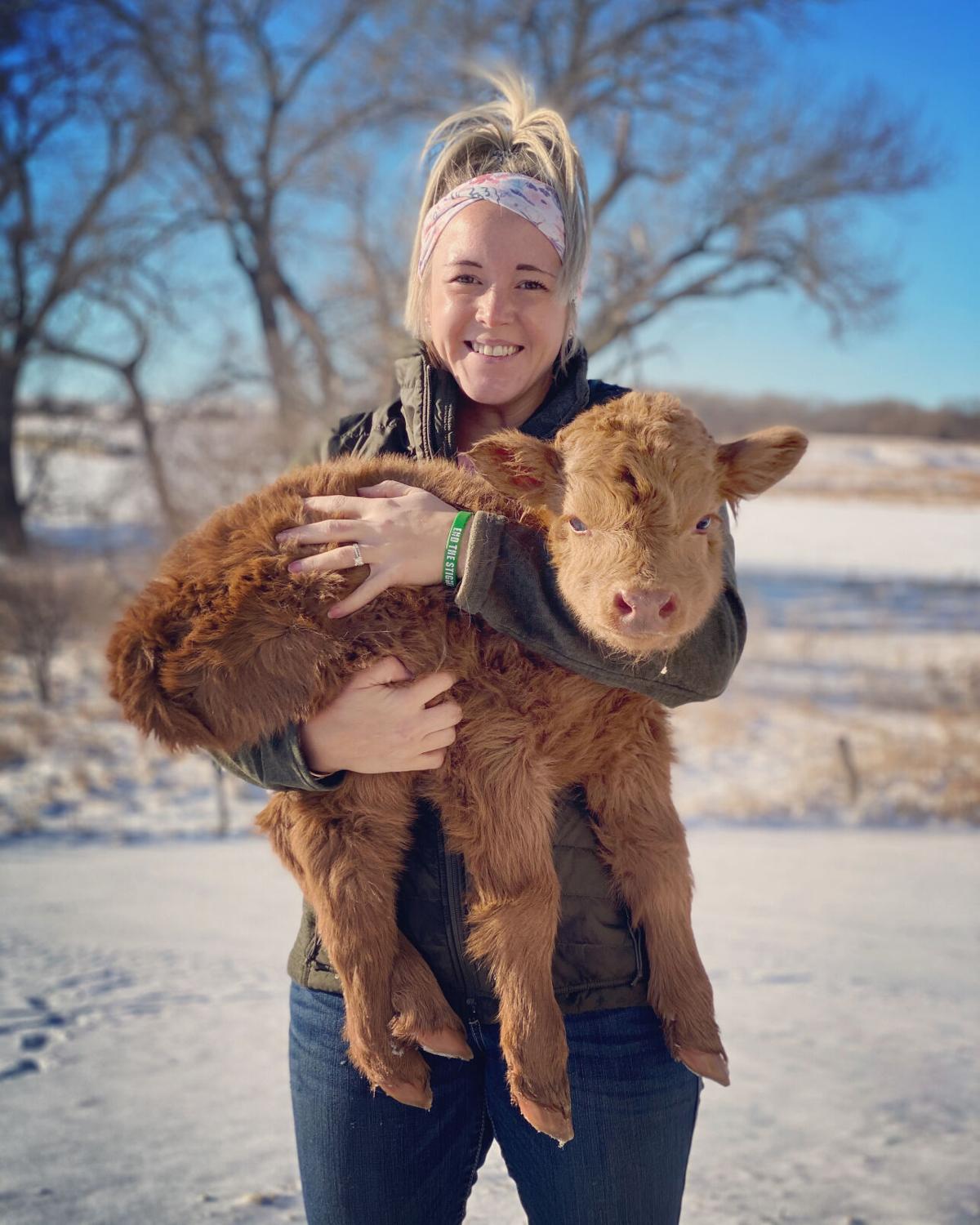 Kate Zutavern carries one of the Rolling 7 minis. The minis, who grow to between 500-800 pounds at maturity, have been sold across the nation as exotic pets and sometimes even therapy animals. 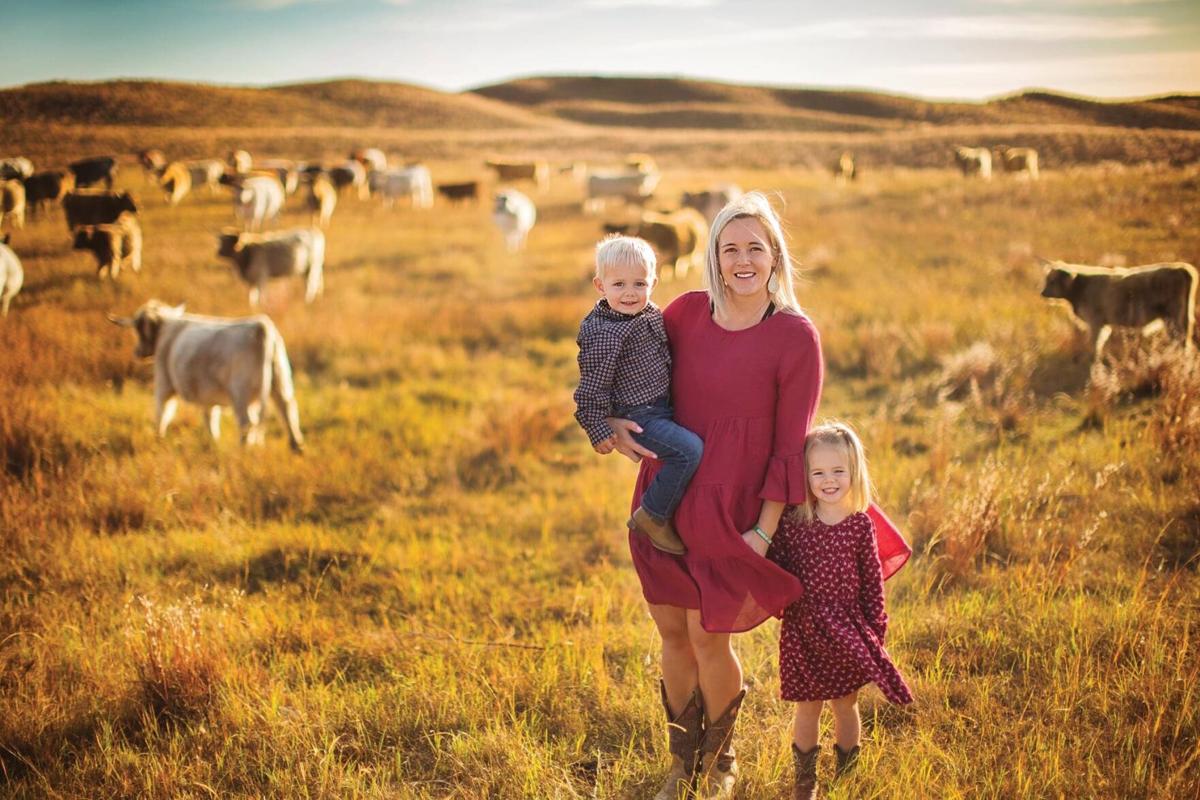 Kate Zutavern, daughter Oakley and son John continue the dream that Kate’s husband and the children’s father, Print, started in 2015 with their herd of mini cattle. 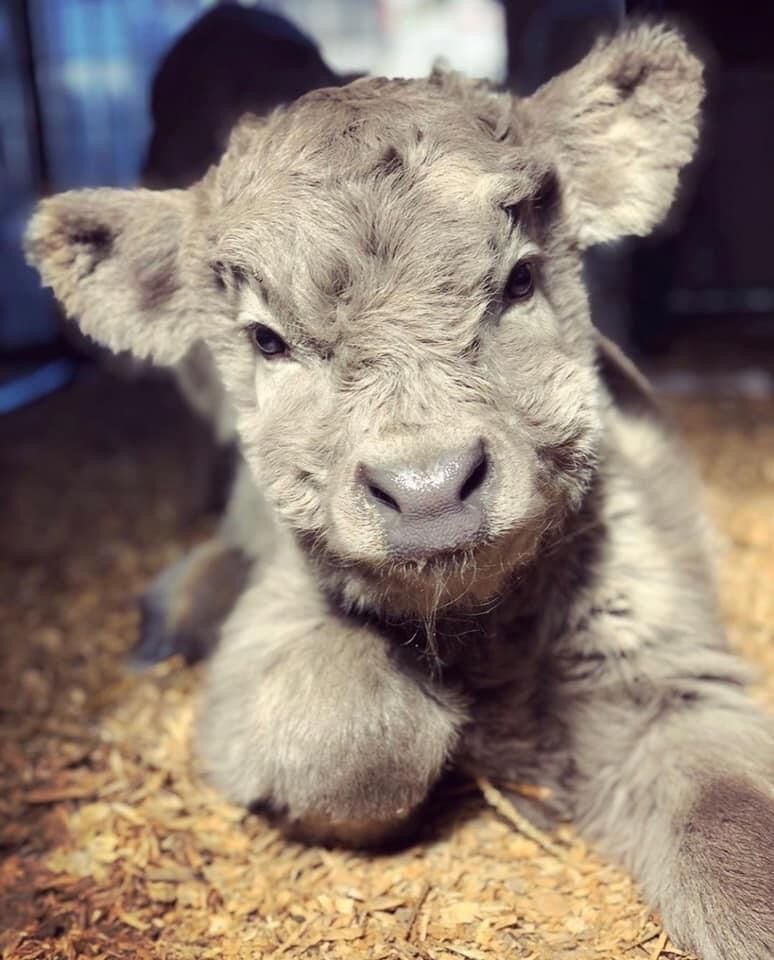 A Highland mini calf on the Rolling 7 Ranch near Broken Bow, Neb. 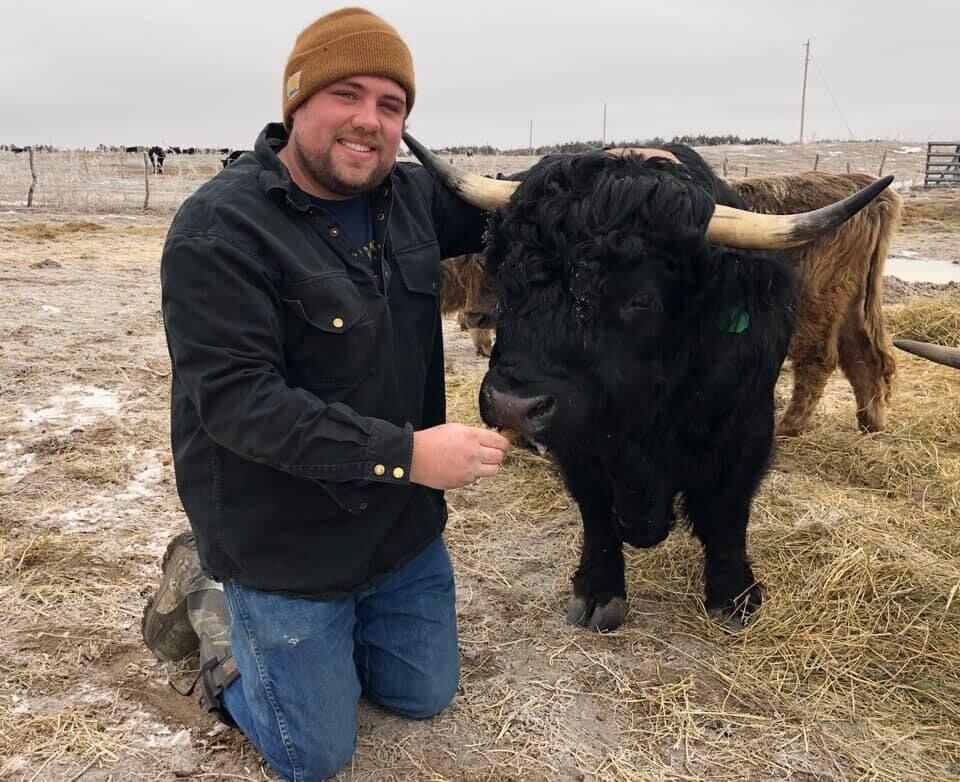 Print Zutavern kneels with a mini Highland bull. The Zutaverns’ miniatures are nearly always Highlands crossed with another breed to add color. 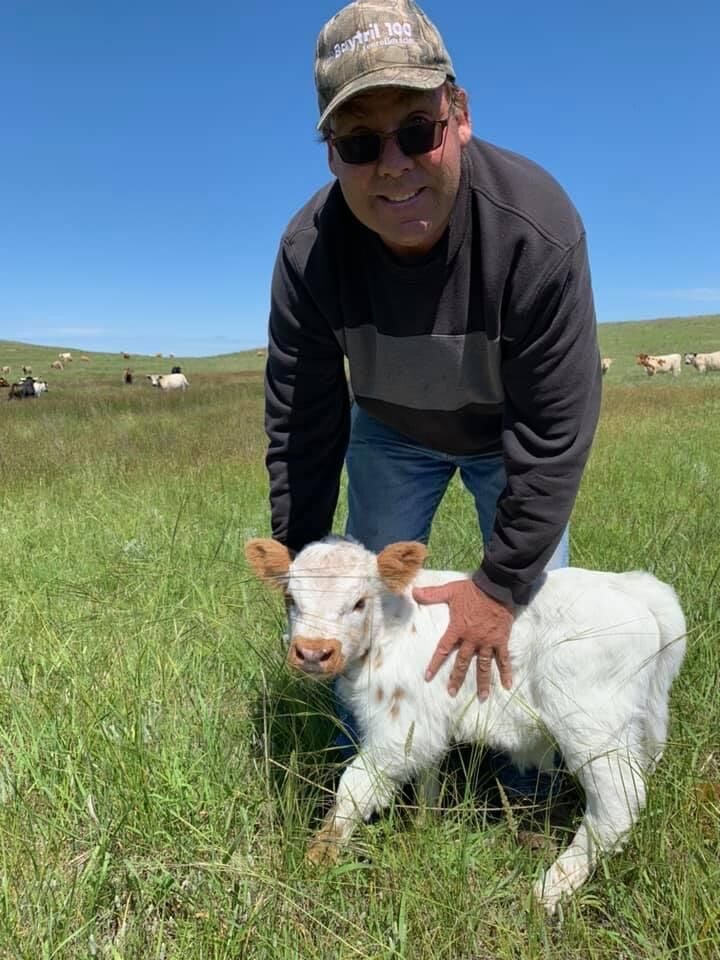 John Zutavern with a mini calf. The Zutaverns raise Angus cattle near Broken Bow, Neb., and have added mini cattle to their operation.