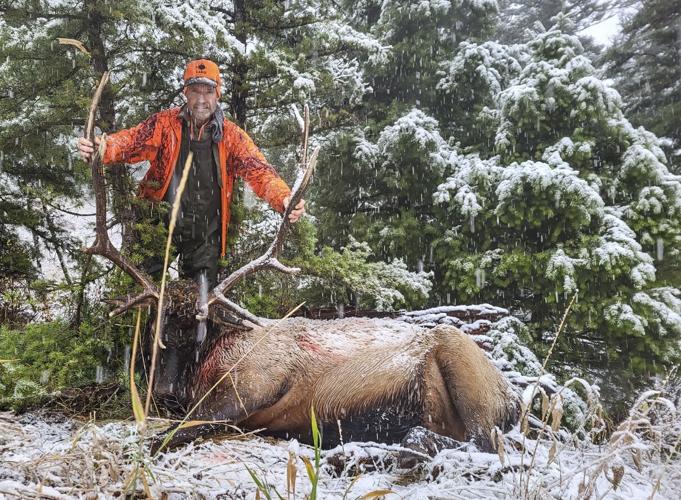 The harvesting of a 6x6 bull elk was an epic experience for Mark Walters. 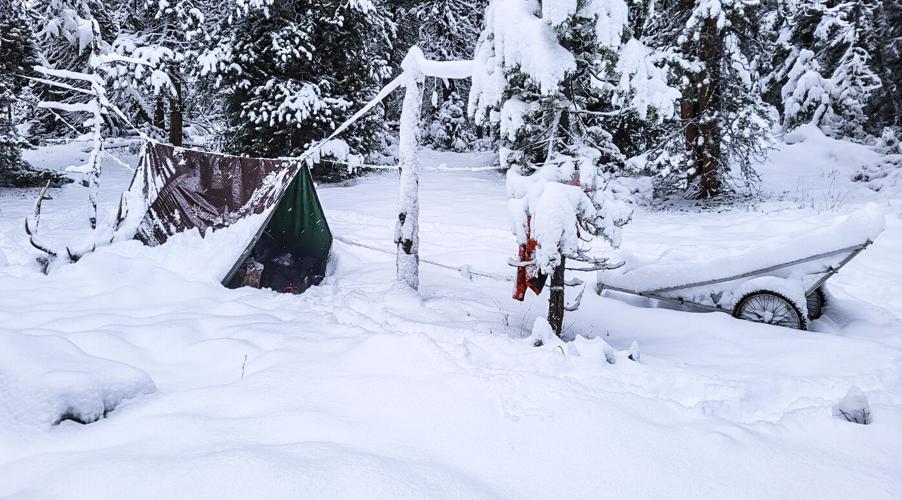 Mark Walters' spike camp is flat the morning after he harvests his bull, during a 16-inch snowfall. 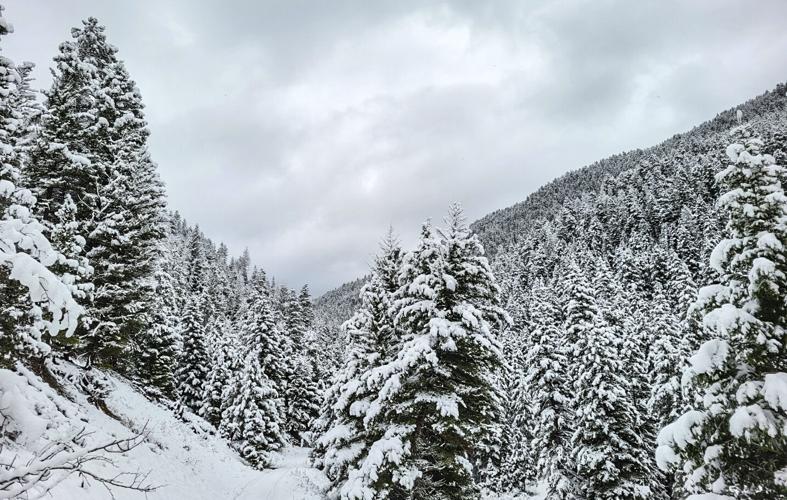 The conditions on the Montana elk hunt are just as beautiful as they are brutal.

What you are about to read is good stuff, and is about one of the craziest most unique challenging days of my 61 years walking this earth. Five days earlier I had left Wisconsin on a solo public-land elk and mule-deer hunt. My plan was to put much of my time and energy into scouting as well as building a base camp and a spike camp in the Gallatin National Forest in southern Montana.

It was the first day of my hunt, which was Montana’s opening day. I spent my night sleeping and listening to rain as it fell on my tent. I was at my spike camp, which was close to 1 mile below where I planned on hunting – and 2 miles above my base camp.

A major snowstorm was supposed to be followed by the rain. At 4 a.m. I said, “To heck with it; I am not crawling up that mountain in the dark, in the rain.” At 4:45 a.m. my conscience got the best of me, and I dressed and began my trek. At that time the rain changed to snow. I might add that when I dressed, I pulled a Sasquatch sweatshirt out of my pack that my girlfriend, Michelle Chiaro who passed away June 15, would wear.

I was over-dressed for the trek-climb and became too hot. An hour before daylight I was sitting on the root ball of a deadfall with two umbrellas covering me. I was watching a park or meadow where elk and deer like to feed. The area was surrounded by dark timber and spruce. I was near the top of a summit; on one side of the park it was a straight drop down the mountain.

Daylight was coming, and just like that I felt the presence of something. I looked behind me and maybe 50 yards into the timber were three elk. With my tag I could harvest either an antlerless elk or a bull with at least a 4-inch brow tine. One looked like a small bull but I couldn’t tell. They wandered off.

Less than an hour later a cow elk that seemed to be as big as a horse appeared out of nowhere from the other side of the mountain. She was followed by a calf and two other cows. All four were heading toward me at about 90 yards away.

I saw the bull’s antlers first because his body had not cleared the other side of the mountain yet – and it was an amazing sight because they were large. When his body came over the mountain he looked like a horse with large antlers. I had to give him about a minute to clear some trees, and then I put a round from my 300 in the vitals. The bull ran toward me so I fired three more times – and just like that my elk hunt was complete. I had just harvested a mature six-by-six.

When I walked up to him I was honestly amazed at how physically enormous he was. I later learned a mature bull elk weighs between 700 and 1,100 pounds. This guy was all of 900.

The job of skinning and quartering was a no-nonsense get-it-done task. I literally straddled the carcass and worked as fast as I could because I knew I would lose daylight. My plan was to use a plastic Otter Sled and haul about 125 pounds at a time. Had a drone been following, it would have made for a great video. On at least 12 occasions I either tripped over an unseen rock or deadfall, or the sled I was pulling started going so fast it would run me over.

Twice I went down the mountain at least 30 yards with no control other than my arms, and the only thing that stopped me was either trees or rocks. The art of falling is known to few.

When I returned from my second trip, I could see in the fresh snow that three dogs or wolves or who-knows-what-type of animals had found the bull and even taken a couple of bites. The trips were so physical that I didn’t even carry my gun, but I did have bear spray.

I became as soaked as one could be with multiple layers of clothes on – sweat from the inside, and blood and melting snow from the outside. Every step I left a trail of blood, and the pain from the falls was kicking my ass.

At exactly dark-thirty I made it to my spike camp with my final load. Even though I had used a rope under a tarp, my tent was collapsed. I buried the meat in the snow; there was no way it was going down the mountain on this day to my base camp.

My reward was peanuts, granola bars and two cans of Pabst Blue Ribbon in a tent that was pelted with snow the entire night.

But nothing mattered. I got my bull!

Mark Walters lives near Necedah, Wisconsin. An outdoor-adventures writer since 1989, he enjoys hobby farming, adventure and anything outdoors. "If I wasn't earning a living as a writer I would want to be a beef farmer," he says. Email sunsetoutdoors@tds.net to reach him.

I woke up at 5 a.m., milking time, the day they laid Vince Willis to rest in the Loyd Cemetery just a mile south of our old farm in Richland C…

The biggest concern facing agricultural lenders going into 2023 is interest-rate volatility, according to the 2022 Agricultural Lender Survey …

Life is measured by the passage of time – and the season of deer hunting gives me plenty of moments to reflect on past memories.

People probably can’t tell the difference between the “statuses” of the horses in the photos. But Jack Daniels can. His human, Barbara Shannon…

When I need a safe place to escape from the stresses of modern life, memory takes me back to the barn in winter on the farm where I grew up.

From the Back Paddock

MARSHFIELD, Wis. – Memory Lane Farm takes visitors to the year 1 – or close to it. Visitors will walk through the streets of Bethlehem – compl…

The harvesting of a 6x6 bull elk was an epic experience for Mark Walters.

Mark Walters' spike camp is flat the morning after he harvests his bull, during a 16-inch snowfall.

The conditions on the Montana elk hunt are just as beautiful as they are brutal.