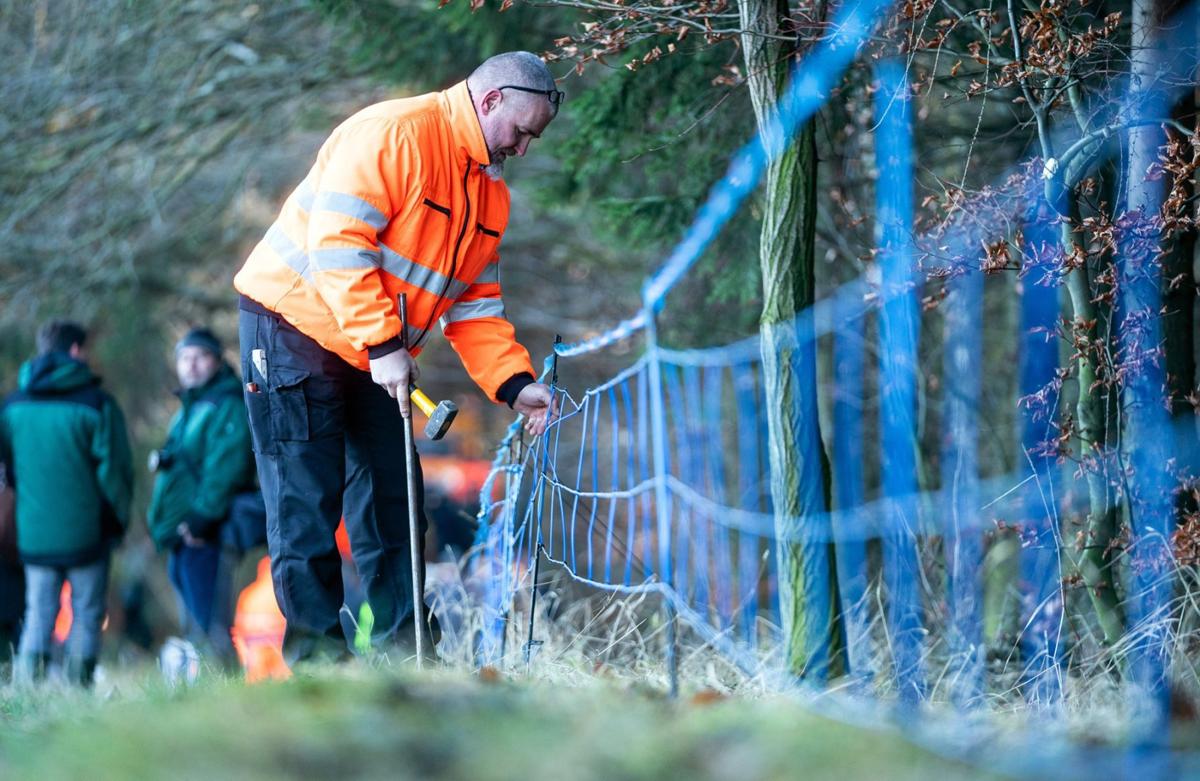 An electrified fence to deter wild boars is erected in Schirgiswalde-Kirschau, in eastern Germany.

An electrified fence to deter wild boars is erected in Schirgiswalde-Kirschau, in eastern Germany.

Authorities in India officially reported African swine fever to the World Organization for Animal Health this past month after tests confirmed pigs on several farms. They are shown by red dots on the map. The pigs were positive for the disease in the far northeastern states of Assam and Arunachal Pradesh – in the corner between China, Myanmar, Bhutan and Bangladesh. 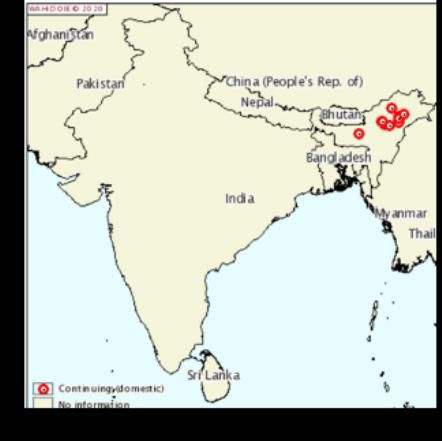 In all the official World Organization for Animal Health report showed 10,920 infected pigs in the affected districts of both states, and deaths of 3,701 pigs with 4,199 cases. The report further showed a mortality rate of 34 percent and a fatality rate at 88 percent due to African swine fever.

According to information from the Spanish Ministry of Agriculture reporting on the world health situation, there are new suspected cases of African swine fever in wild boar found dead in the district of Siang in Arunachal Pradesh, where outbreaks had occurred on pig farms. Six wild-boar carcasses have been found in a forest in the district; samples have been taken for analysis at the country’s national reference laboratory. 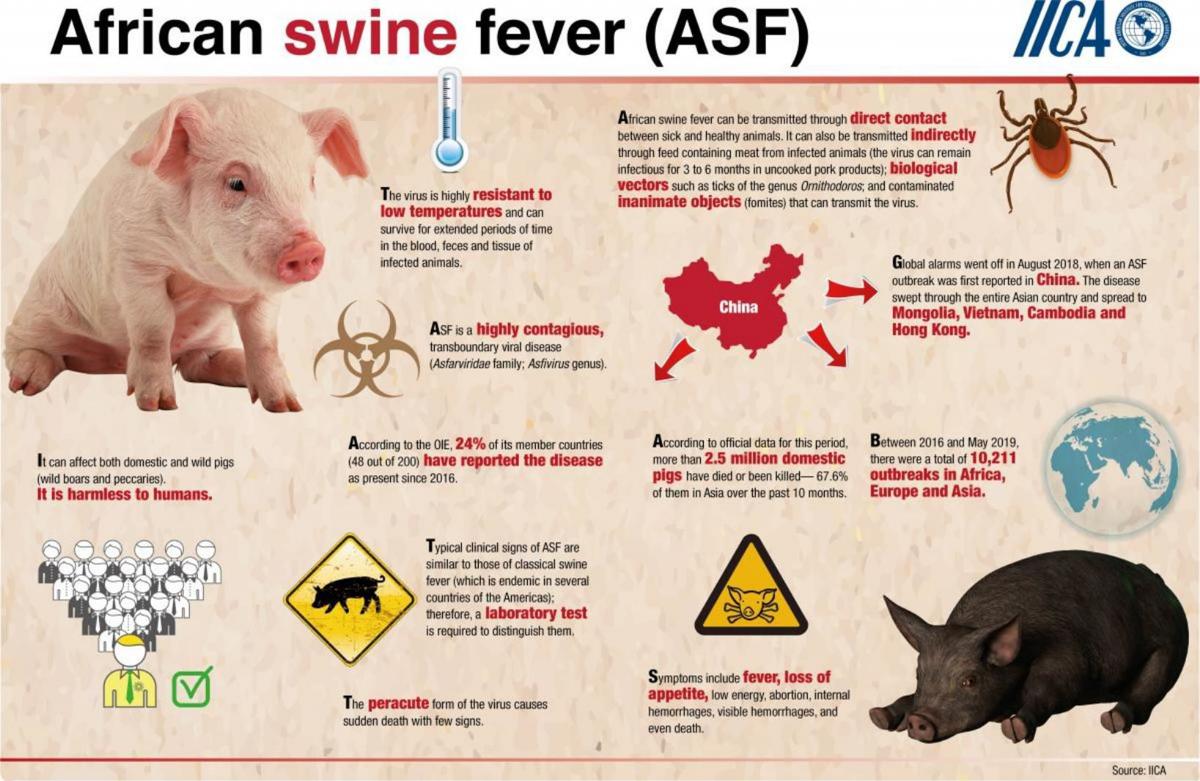 The Polish Central Veterinary Inspectorate as of June 15 reported 23 pigs and one sow on a backyard farm were confirmed African swine fever-positive by the country’s National Veterinary Institute, the National Research Institute in Puławy. The animals were found on a farm near the village of Ratowice, which is about 13 miles east of the closest known cases of African swine fever in wild boar. That’s about 78 air miles from the border with Germany, the European Union’s largest producer of pork and the second-largest EU pork exporter to non-EU countries after Spain.

The African swine fever virus has been present in eastern Poland since 2014. It was discovered for the first time in a separate cluster in wild boar in western Poland this past November. Since then it has reportedly spread to 720 sites in three provinces in the western part of the country. The Polish government plans to cull 90 percent of the country’s wild boar after a special law was passed this past December giving Polish hunting associations new powers in culling wild boar.

German officials and producers have been quite worried about their eastern neighbor’s African swine fever status. As in Poland, hunters in Germany are trying to reduce the wild boar population despite what appears to be an uphill battle. African swine fever has been confirmed in wild boar as close as 6 miles from the German border.

The German states of Brandenburg and Saxony have both built fences along the border with Poland to prevent wild boars from entering. Saxony also recently heightened measures for hunters, who must now report every wild boar found dead and any wild boars that have been killed. A hunter must tell the relevant local food-inspection and veterinary office in the district where the boar is found or shot.

In a May 2020 publication from the Friedrich-Loeffler-Institute the organization puts Germany’s risk for contracting African swine fever from other European countries as moderate or high. It states, “The risk of entry of (African swine fever) into Germany through illegal transportation and disposal of contaminated material is estimated as high. The risk of entry of contaminated pork meat and from pork-derived products by vehicles or people along the main traffic routes is judged as high in the context of a ‘worst case scenario.’ The risk of entry via hunting tourism in affected areas and by carrying back trophies from such areas is estimated as moderate. The risk of direct spread through infected wild boar is assessed as high in areas close to the affected regions in Belgium and Poland.”

Whether in mainland China, Vietnam, Indonesia, the Philippines or nearby nations, African swine fever continues to cause issues in both domestic- and wild-pig populations. Vietnam seems to have had a setback after some earlier success in curbing African swine fever. Recent reports indicate 4,000 pigs have been culled this year in Vietnam due to the disease. Officials place the blame on poor biosecurity and the failure to report sick pigs to the proper authorities.

But the World Organization for Animal Health has reported known African swine fever cases in Mongolia, Cambodia and Myanmar have been resolved, which offers a glimmer of good news from Asia.

Visit www.aphis.usda.gov and search for "swine fever" for more information.