Manure from three Middleton-area dairy farms is processed in three digester tanks. Each tank holds as much as 1 million gallons of manure.

EnTech Solutions and Northern Biogas are partners in a biogas facility that was built in 201. It's now producing renewable natural gas in addition to electricity and reduced-phosphorus fertilizer. 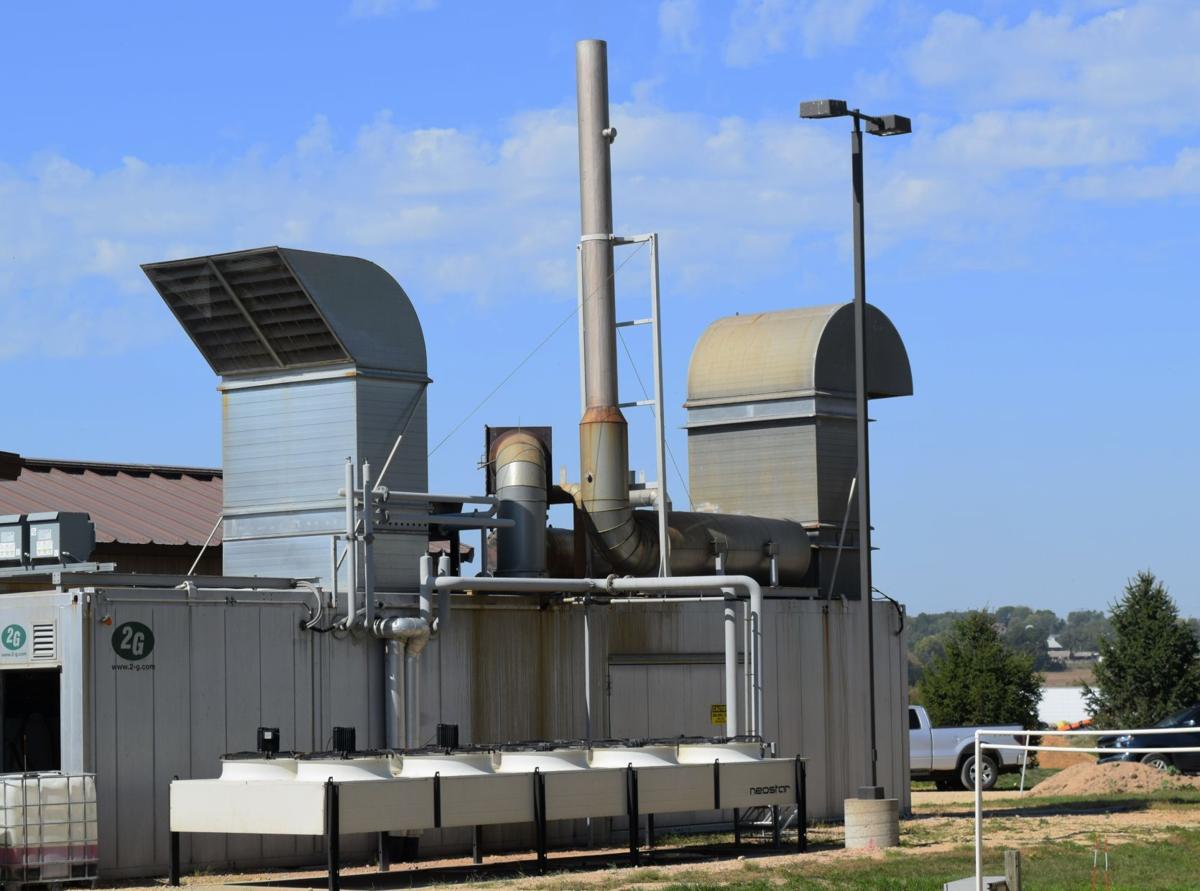 Biogas is combusted in generators to create about 14.4 million kilowatt hours of electricity per year. 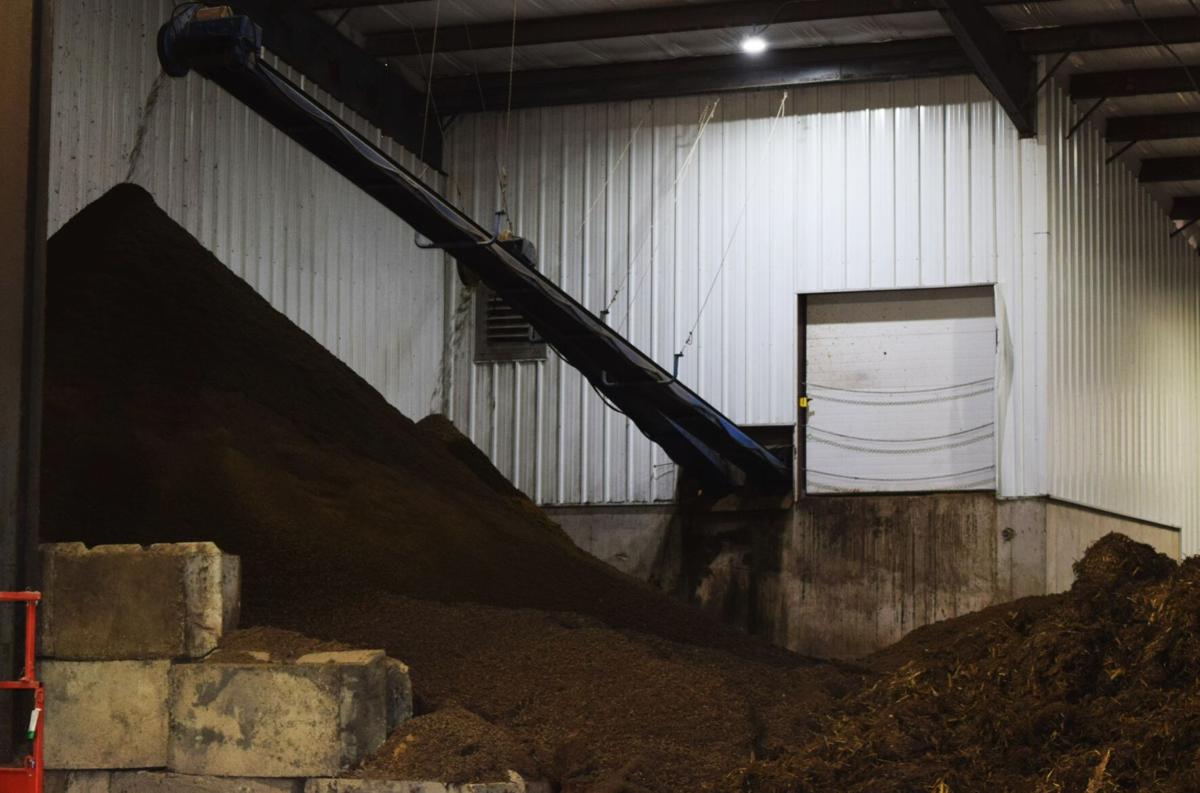 A manure separator is used to separate solids from liquids. Clean solids can be used for cow bedding.

MIDDLETON, Wis. – Anaerobic-digester tanks dot the horizon near Middleton. Semi-trucks steadily transport manure to the biogas facility from two dairy farms. A third dairy farm – across the road from the digester – pumps manure through a pipe. At the biogas facility manure will be processed into renewable natural gas, as well as liquid manure with reduced phosphorus for fertilizer.

The liquid manure will be used by the farms. The natural gas will be trucked to a renewable-natural-gas offloading facility at the Dane County landfill in Madison, Wisconsin. The renewable natural gas will then be injected into an interstate pipeline to the West Coast and be used to fuel truck fleets. It also will be used to fuel fleet trucks and vehicles in Dane County. It’s a joint effort that will help provide a sustainable future in agriculture and energy.

The effort is a collaboration between three Middleton-area dairy farms, along with EnTech Solutions, Northern Biogas and Aqua Innovations. Dane County contributed more than $3 million from the state of Wisconsin for the digester’s construction because the operation could reduce phosphorus from manure runoff into the Lake Mendota watershed. The project is building upon a biogas facility built in 2013 by Gundersen Health System of La Crosse, Wisconsin, when Gundersen was looking to produce renewable energy. The operation annually generated about 16 million kilowatt hours of electricity, enough to power 2,500 homes.

The Middleton operation features screw-press and centrifuge technology to separate manure solids and fiber. A nutrient-concentration system purchased by Dane County was added to the facility in 2020. That allows the liquid portion of separated manure to be pumped through ultrafiltration and reverse-osmosis membranes. It’s oxygenated and adjusted for pH before being discharged into the North Fork of Pheasant Branch Creek, according to the Dane County Land and Water Resources Department. The system could treat as much as 100,000 gallons of manure daily and return as much as 50,000 gallons of clean water back to the stream. Nutrients from the liquid manure also could be concentrated and stored for later use as farm fertilizer.

Together they’re working with Blue Star Dairy Middleton, Hensen Brothers Farm and Ziegler Dairy. Manure from the three farms’ 3,000-plus cows is processed in three digester tanks, which each hold as much as 1 million gallons of manure. The airtight tanks are maintained at about 100 degrees Fahrenheit. That creates an environment where microbes thrive and consume volatile solids in the manure while producing methane gas.

For years the methane gas captured at the digester was combusted in generators to create electricity. But it will soon instead be processed into renewable natural gas, which is expected to reduce emissions by more than 11,000 metric tons of carbon-dioxide equivalent per year.

Paul Kane, group leader for sustainable fuels at EnTech Solutions, said, “By the end of 2021 we’ll be able to turn organic waste into gas to replace traditional vehicle fuels through a net-carbon-negative process.”

The renewable natural gas will be trucked to Dane County’s Department of Waste and Renewables offloading facility. The offloading station and a county gas-processing plant were completed in 2019; they’re used to process Dane County’s landfill biogas for pipeline injection. The station reduces barriers for biogas producers to gain access to the pipeline, renewable-energy markets and renewable-fuel credits issued by the U.S. Environmental Protection Agency, according to the Dane County’s Executive Office.

Art Meinholz of Blue Star Dairy welcomed the new venture to produce renewable natural gas. He and a few other farmers met with Northern Biogas and EnTech Solutions several months ago to discuss how the biogas operation could be improved and made more financially sustainable. Electrical production alone wasn’t financially sustainable, he said.

“Renewable natural gas was the way to go,” he said.

“We haven’t worked with the new operators long, but we see more value-added opportunity,” Meinholz said.

The biogas facility has enabled his farm to reduce the amount of phosphorus in the manure applied to their 950-acre-plus farm.

“That has allowed us to have more cows and it also reduces the risk of having too much manure to handle,” he said.

Aqua Innovations’ nutrient-concentration system has reduced the amount of water in the manure. That translates to lesser pumping costs to apply nutrients to fields, Meinholz said.

EnTech Solutions plans to make the Middleton biogas site carbon-neutral by installing a microgrid to power the facility’s electrical demand.

Manure from three Middleton-area dairy farms is processed in three digester tanks. Each tank holds as much as 1 million gallons of manure.

EnTech Solutions and Northern Biogas are partners in a biogas facility that was built in 201. It's now producing renewable natural gas in addition to electricity and reduced-phosphorus fertilizer.

Biogas is combusted in generators to create about 14.4 million kilowatt hours of electricity per year.

A manure separator is used to separate solids from liquids. Clean solids can be used for cow bedding.