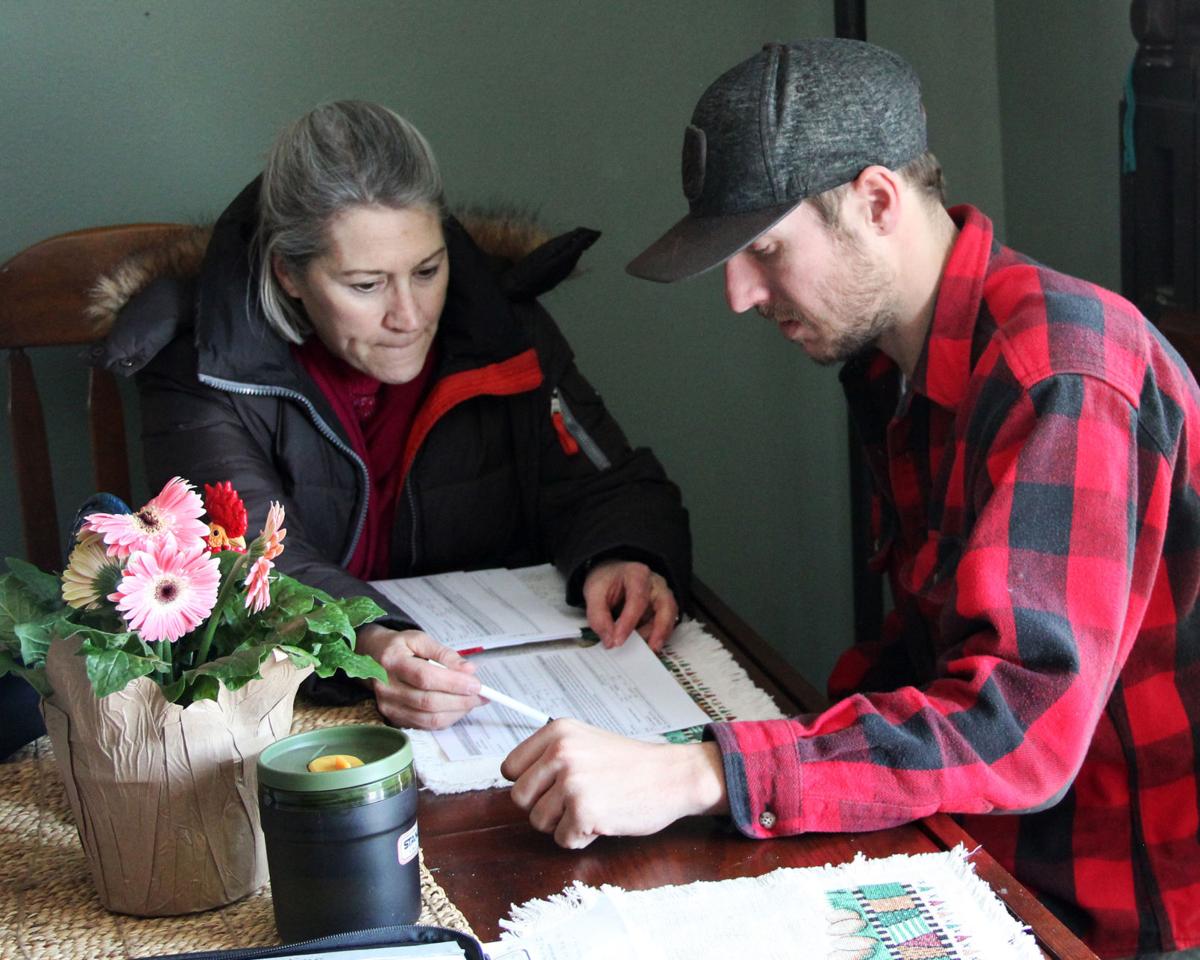 Merrie Schamberger works through a conservation plan with Justin Duell of The G Farm near Larsen, Wisconsin. 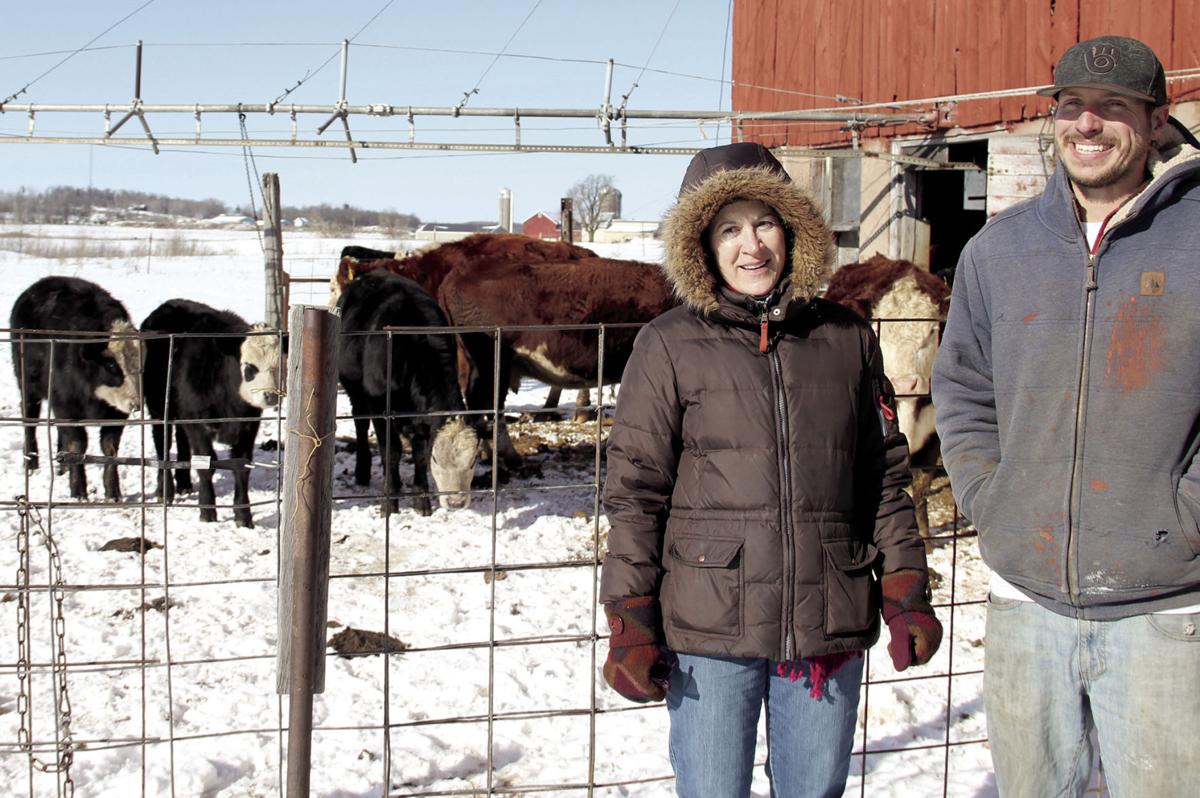 Merrie Schamberger works with Justin Duell on a sub-zero winter day. She says she enjoys working one-on-one with farmers, particularly beginning farmers such as Duell. 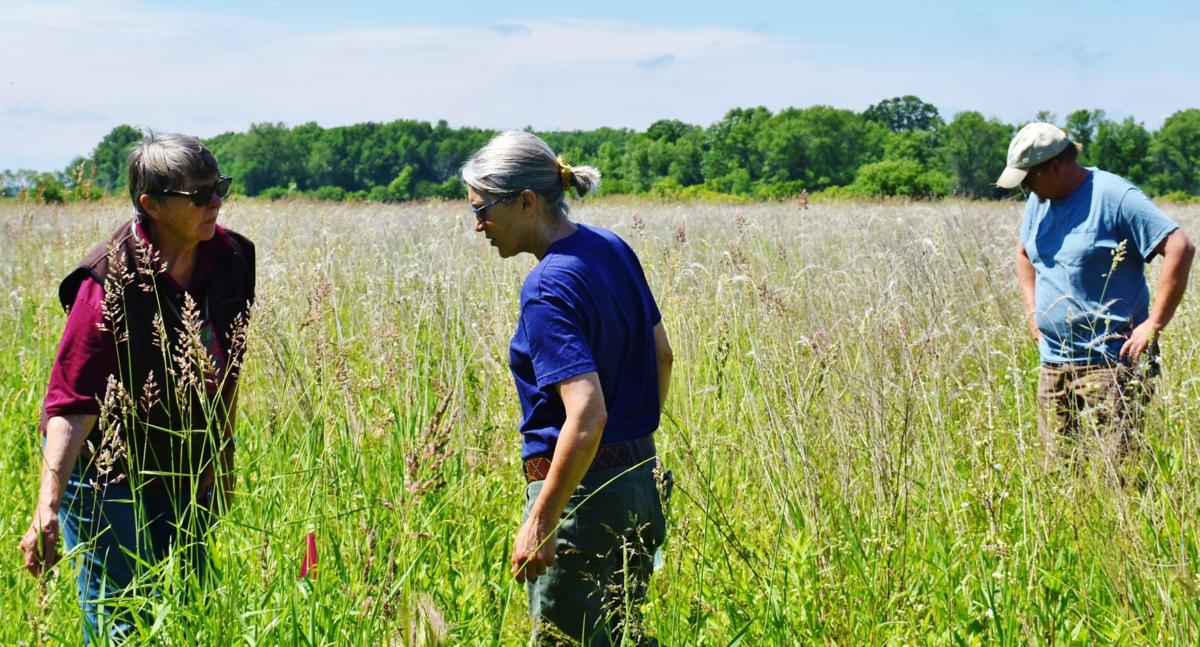 Merrie Schamberger, center, discusses native plants with a landowner near Neenah, Wisconsin. They're participating in a pollinator walk.

Merrie Schamberger works through a conservation plan with Justin Duell of The G Farm near Larsen, Wisconsin.

Merrie Schamberger works with Justin Duell on a sub-zero winter day. She says she enjoys working one-on-one with farmers, particularly beginning farmers such as Duell.

Merrie Schamberger, center, discusses native plants with a landowner near Neenah, Wisconsin. They're participating in a pollinator walk.

OSHKOSH, Wis. – Working one-on-one with farmers is what Merrie Schamberger likes most about her job as a district conservationist for the U.S. Department of Agriculture’s Natural Resources Conservation Service. Based out of an office in Oshkosh, she helps both farmers and landowners in Winnebago County conserve soil, protect water quality, and improve pollinator and wildlife habitat.

“I like helping farmers and landowners solve their problems and provide suggestions for improving wildlife,” she said.

She particularly enjoys working with beginning farmers, she said. One of the beginning farmers she’s worked with is Justin Duell of The G Farm near Larsen, Wisconsin. He began farming in 2015; in 2016 he contacted the Natural Resources Conservation Service office to learn how some of the technical-assistance programs worked. Schamberger visited the farm and provided technical advice for Duell, who practices rotational grazing of beef cattle, pigs, chickens and turkeys on 18 acres of land. His silvopasture program includes oak, chestnut, apple and cherry trees as well as Korean pine nuts. She helped him apply for assistance for fencing, tree planting and an irrigation system.

Duell said he was particularly interested in silvopasture after reading “Restoration Agriculture,” a book by Mark Shepard. After learning that, Schamberger shared with Duell a number of additional resources about silvopasture and restorative agriculture.

“She’s a great resource,” he said. “She helped connect me with like-minded individuals and believes in who she’s helping.”

Schamberger began building her resource base as early as high school when she attended an Izaak Walton League of America conservation camp. On the advice of a high school guidance counselor she pursued a business degree in college. She earned in 1985 a bachelor’s degree in business administration from the University of Wisconsin-Milwaukee. But she said she’d always been drawn to the outdoors. So after attending a program on the biological aspects of conservation at the university, she pursued a degree in conservation biology.

“I had to start all over again,” she said of needing science credits.

She earned in 1993 a bachelor’s of science degree in conservation biology. Prior to graduating she interned at what was then known as the USDA’s Soil Conservation Service; it became the Natural Resources Conservation Service in 1994. She served as a cartographer, working on wetlands delineations eligible for farm-program assistance.

She also worked in the early 1990s with landowners in Dodge County for the Wisconsin Department of Natural Resources.

Tom Thrall was the state biologist in Wisconsin for the Natural Resources Conservation Service at that time. He recalls Schamberger contacting him. She had expressed interest in being a biological specialist, working with wetlands, fish and wildlife.

“I was impressed that she called seeking advice on how to progress in her career,” he said. “She was enthusiastic and wanted to have a career that was satisfying as well as meaningful.”

Schamberger joined the Natural Resources Conservation Service in 1995 and has worked there ever since.

Before becoming the state biologist in Wisconsin, Thrall was a district conservationist for the Soil Conservation Service in Michigan. He recalls training in 1971 that state’s first female soil conservationist. People at the time were concerned that a woman wouldn’t be listened to or shouldn’t be left alone with a man on a farm.

“That was absurd,” Thrall said, adding the woman soil-conservationist worked just fine. “Since then I’ve seen many more women in (the Natural Resources Conservation Service. I’ve enjoyed mentoring and encouraging them to progress in their careers.”

Schamberger’s advice to young people interested in conservation is to do volunteer work while in high school and college. The Natural Resources Conservation Service offers a Pathways Program where students can work during summer breaks.

“Try different types of jobs to see if you like it,” she said.

The agency likes to see students work a few summers in different locations, she said, to learn about different topographies and soil types.