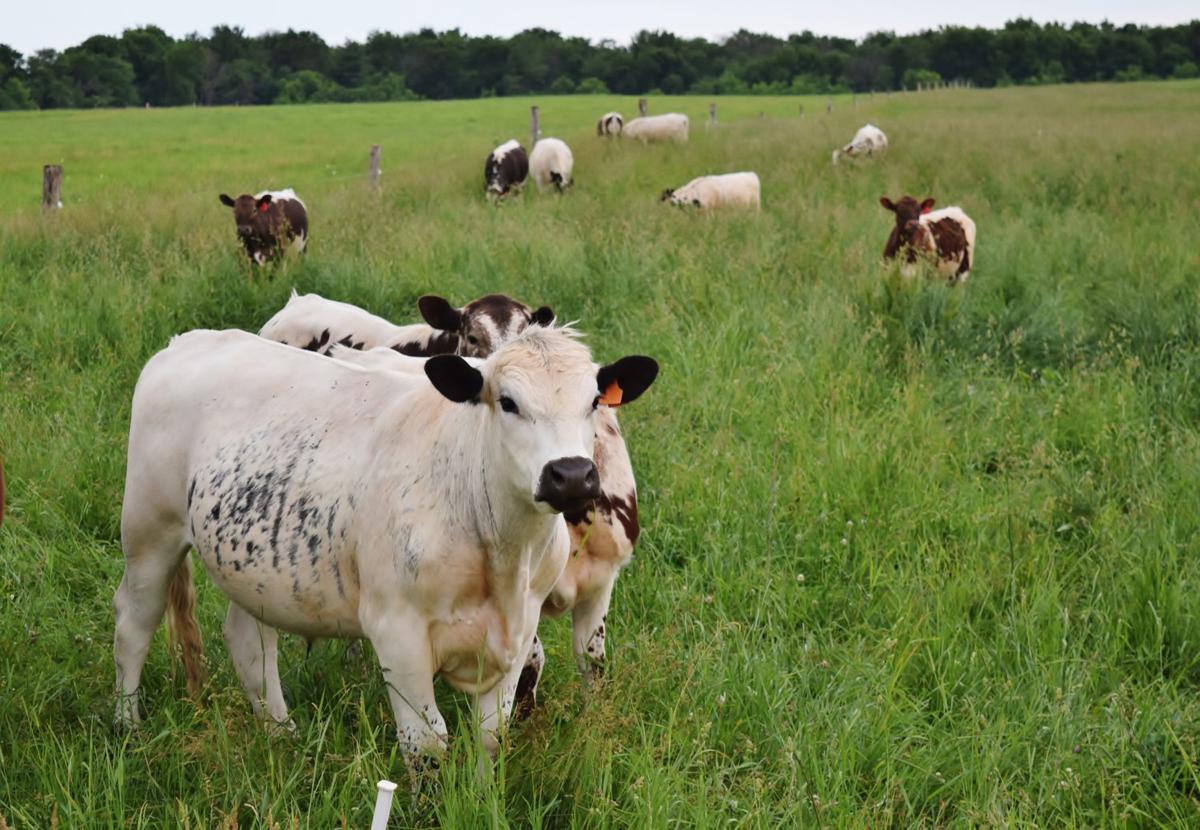 Beef cattle are 100 percent grass-fed at the Brattset Family Farm near Jefferson, Wisconsin. The farm's herd is composed of British White, Murray Grey and Black Angus genetics. British White cattle are valued for their tender and flavorful meat and for being naturally polled, according to the British White Cattle Association of America. 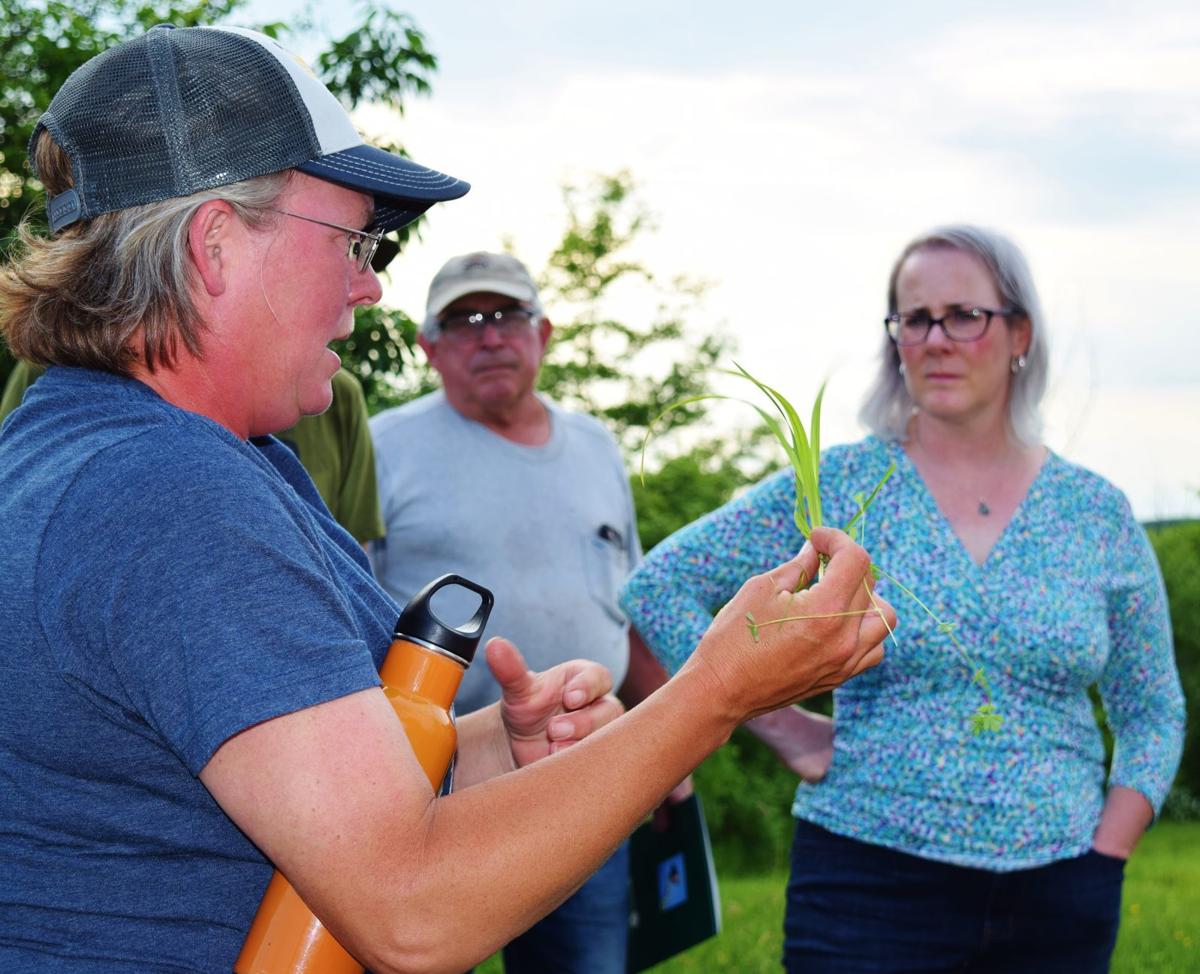 Kirsten Jurcek, left, explains pasture-grass growth to attendees of a twilight pasture walk at her family's farm. Many of the attendees were non-farmers interested in learning more about water quality and farming in their area. 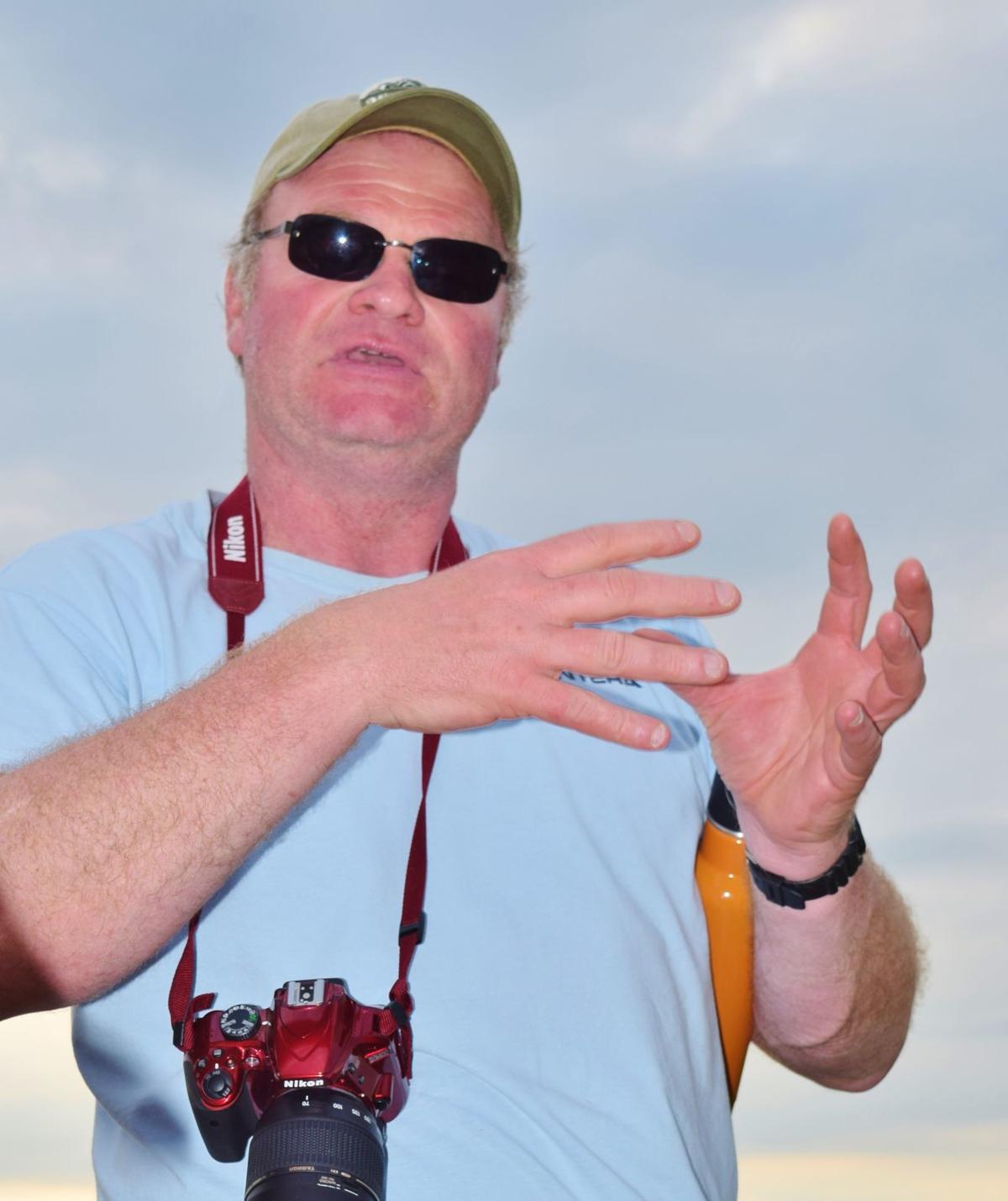 Pat Jurcek, a hydrogeologist working at Intera Inc., talks about the unique challenges of carbonate bedrock in Jefferson County. 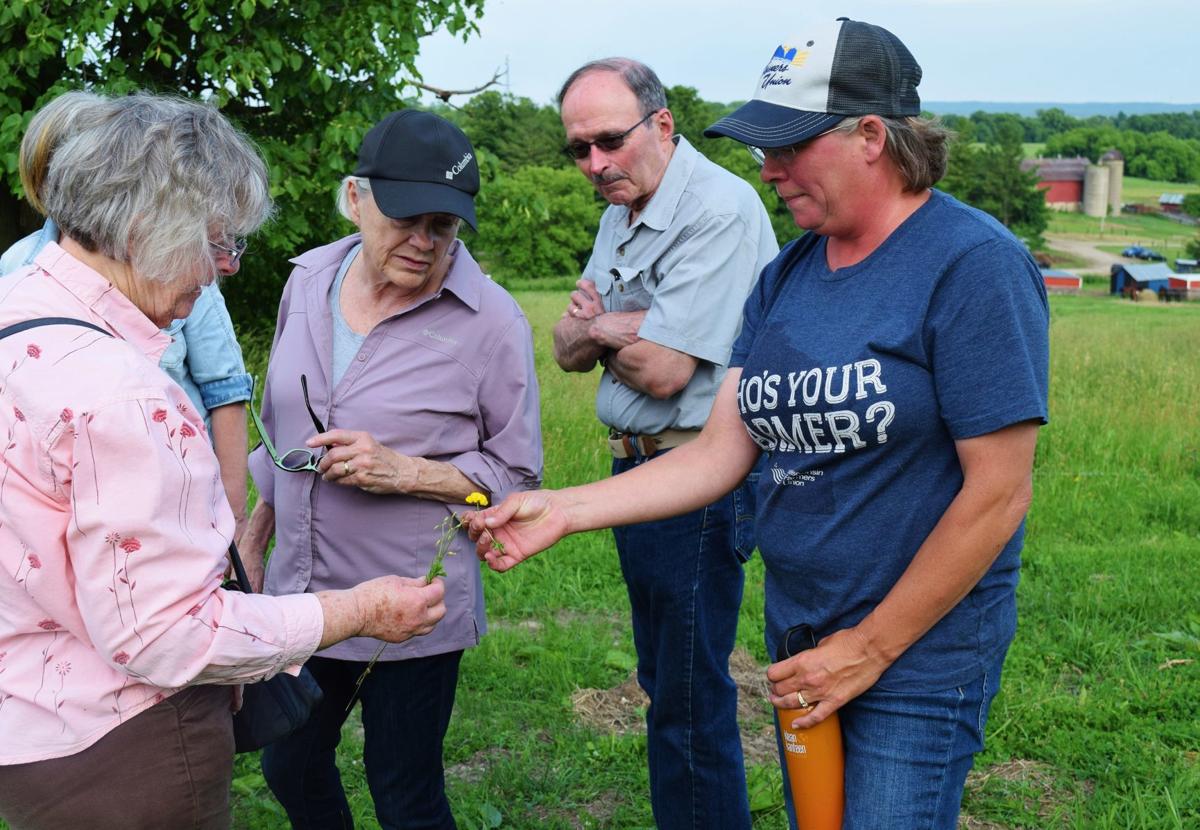 Kirsten Jurcek, right, talks about the nitrogen-fixing properties of birdsfoot trefoil, which she uses in her pasture mix. Jurcek is a grazing specialist for Glacierland Resource Conservation and Development Inc. 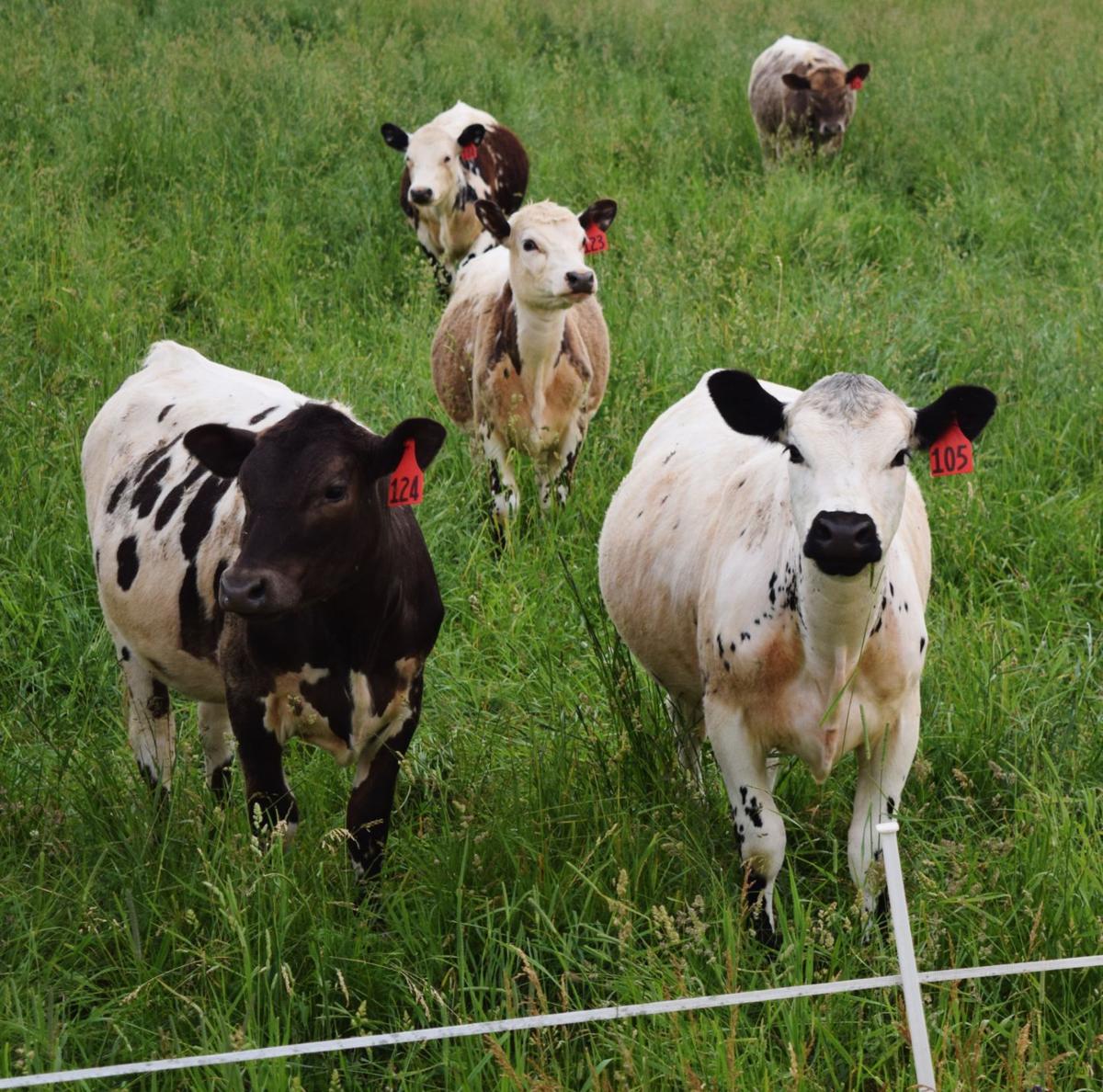 Curious cattle greet attendees of a recent pasture walk at the Brattset Family Farm. They are moved to new grazing paddocks on a daily basis. 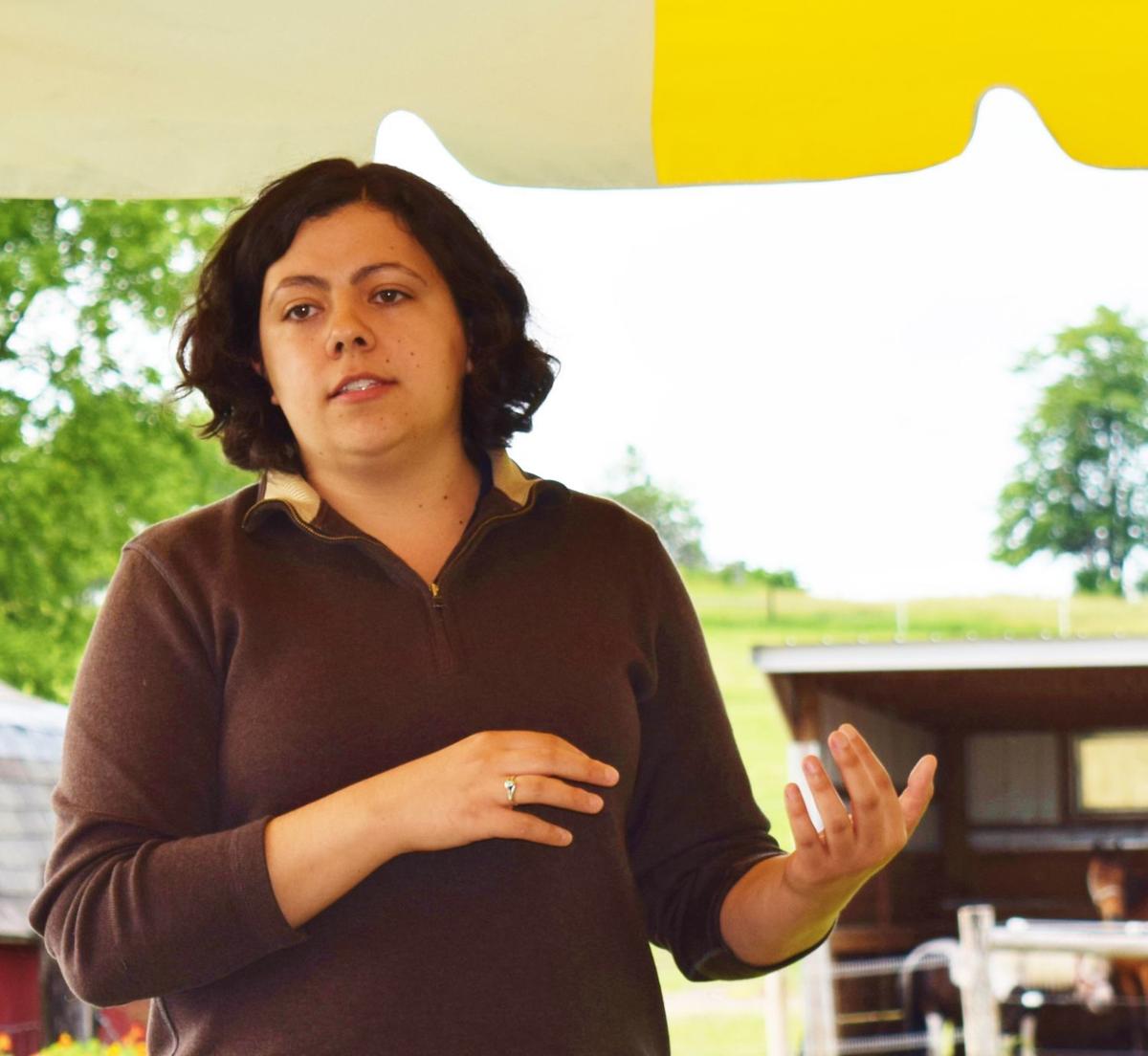 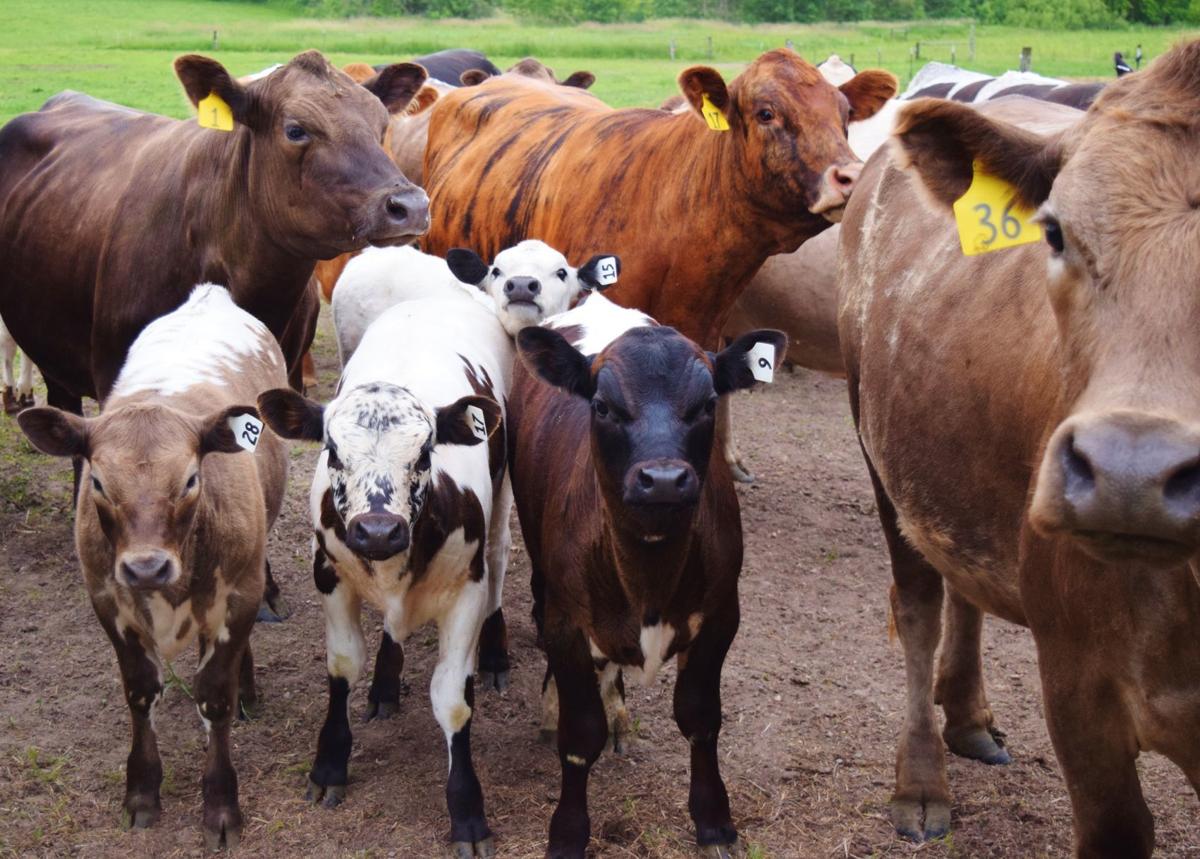 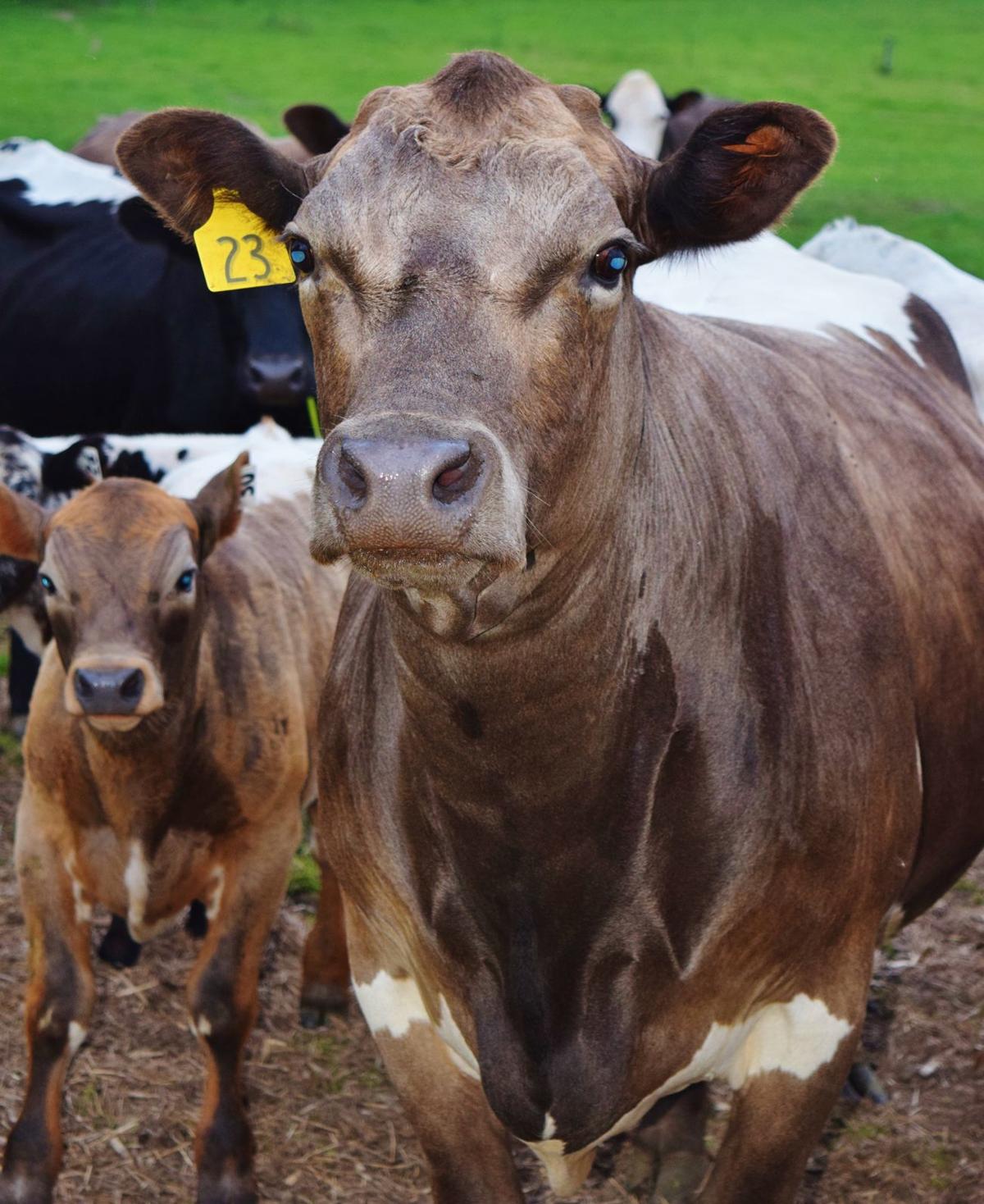 A Murray Grey crossbred cow stands at attention. Murray Grey and Angus cows are bred to a British White bull at the Brattset Family Farm. The breeds were chosen by Kirsten Jurcek for their weight-gaining performance on grass. The American Murray Grey Association points to benchmarking provided by Igentiy, which shows the breed possesses more alleles than the average of U.S. beef cattle for marbling, percent-choice meat and tenderness.

The two are hydrogeologists who raise grass-fed cattle at the Brattset Family Farm near Jefferson. A hydrogeologist studies the ways that groundwater – hydro – moves through the soil and rock of the earth – geology.

Kirsten Jurcek worked as a hydrogeologist for more than a decade. But after starting a family she focused on raising cattle. She currently rotationally grazes more than 110 head of crossbred cattle. Her parents, Harold and Weenonah Brattset, purchased the farm in 1969; it’s now operated by the Jurcek and Brattset families.

Part of the Brattset Family Farm is in the Drumlin Area Land Trust. That land has been in a conservation easement since 2011. Among the goals of the trust are to preserve working farms and to protect water resources in the Drumlin area of south-central Wisconsin.

Jefferson County was once heavily glaciated. It features numerous drumlins, which are elongated ridges of glacial sediment sculpted by ice moving over the bed of a glacier. The down-glacier end of a drumlin is oval or round while the up-glacier end tapers, according to the United States Geological Survey.

Jefferson County’s geography also includes areas of carbonate bedrock within 50 feet of the land surface. Those areas can be vulnerable to groundwater contamination; areas with porous bedrock are susceptible to nitrate contamination. Contamination can come from various sources including fertilizer and manure from farms.

Kirsten Jurcek moves her cattle to fresh pasture daily – not only to provide them optimal nutrition but also to prevent overgrazing and nutrient runoff. Cattle graze forage to a height of about 8 inches. Her pastures are sown with five to seven types of forage species to increase organic matter in the soil. She uses birdsfoot trefoil, red and white clovers that fix nitrogen, orchardgrass and bluegrass. She interseeds forages every three years using a no-till drill.

“I can graze more animals on less land with thick pastures,” she said. “They also gain weight quicker on these pastures.”

She has been practicing rotational grazing for about 10 years. The farm in 2008 earned certification by the U.S. Department of Agriculture’s Organic Program. She doesn’t use synthetic fertilizers, herbicides, insecticides or genetically modified seed. About 145 acres of the farm are in permanent pasture; the farm also contains woods and a wetland area.

Farming impacts water quality in Wisconsin, said Bobbi Wilson with the Wisconsin Farmers Union. The group is advocating for both farmers and water quality by focusing on measures to prevent contamination. One prevention measure is managed grazing, such as what’s practiced at the Brattset Family Farm.

In testimony provided by the Wisconsin Farmers Union at a hearing in April of Wisconsin’s Water Quality Task Force, Wilson said managed grazing is a place where farm profitability and water-quality protection intersect. Farmers have the potential to reduce input costs and access better-value markets for grass-based meat and dairy products – while reducing soil erosion, runoff and nutrient pollution.

The farmer group recommended the task force consider providing farmers with incentives to transition to pasture-based systems. The organization recommended restoring the Wisconsin Grazing Lands Conservation Initiative that had been in place from 2000 to 2011. That program prevented more than 55,000 tons of soil and about one-half-million pounds of phosphorus from entering Wisconsin waters per year.